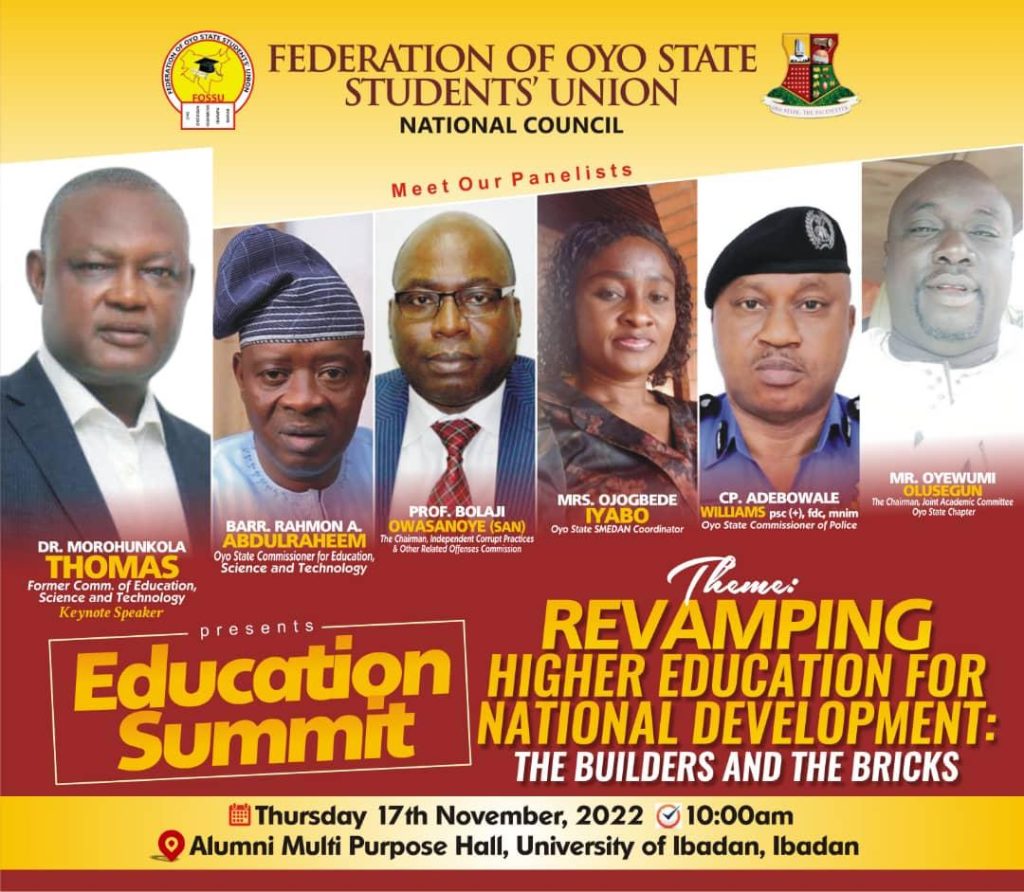 At the recently concluded Federation of Oyo State Students’ Union (FOSSU) National Council Education Summit under the leadership of Aare Alarape Ibrahim, which held on Thursday, 17th of November, 2022, Stakeholders in the Educational Sectors unanimously added their voices to the existing voices on the need for Government to invest more in Tertiary Education for a sustainable development.

In line with the theme of the summit, Revamping Higher Education For National Development: The Builders and The Bricks, the keynote speaker, Dr. Morohunkola Thomas, a former Commissioner of Education in Oyo State expressed his dissatisfaction with the way the Minister of Education handed the ASUU strike and stated that such character shouldn’t be holding such sensitive position.

According to them, the problem facing education in Nigeria is premised on poor funding, misappropriation of funds mismanagement.

Dr. Thomas stressed that inadequate infrastructures, corruption in the process of getting admission and incessant strike actions, obsolete curriculum and examination malpractice have also contributed to the decay in the sector.

In his opinion, he suggested that the way out is proper funding of the sector with constant and periodic assessment of our Institutions, appointment of qualified and experience personalities as Ministers & Commissioners of Education, appointment of qualified Lecturers and periodic training, provision of adequate infrastructure, upgrade of the curriculum, among others.

During the panel session which consisted of Barr. Raheem Abdulraheem, Oyo State Commissioner of Education, Prof. Bolaji Owasanoye, ICPC Oyo State Chairman, Mrs Ojogbade Iyabo, Oyo State SMEDAN Coordinator; CP Adebowale Williams, Oyo State Commissioner of Police and Mr Oyewumi Olusegun, JAC Chairman, Oyo State they equally called for proper funding of the Education sector and futher advised the students to also be focused in their studies.
The State Coordinator of SMEDAN, Mrs Iyabo explained opportunity in her agency that the student community can maximize for their personal development, among others.

The Assistant Commissioner of Police who represented the CP stated that the Police will continue to partner with the student community in order to ensure a smooth relationship and adequate understanding when fighting against crimes on campuses.

The representative of the State ICPC Chairman, Hon. Annatu Muhammad also stated what the Agency has done to reduce financial crime on campuses as well as their support to the student community over the years.

Finally, the State Chairman of Joint Action Committee of Tertiary owned Institutions expressed his dissatisfaction towards the precarious state of Infrastructure on campuses and call on government to do better.