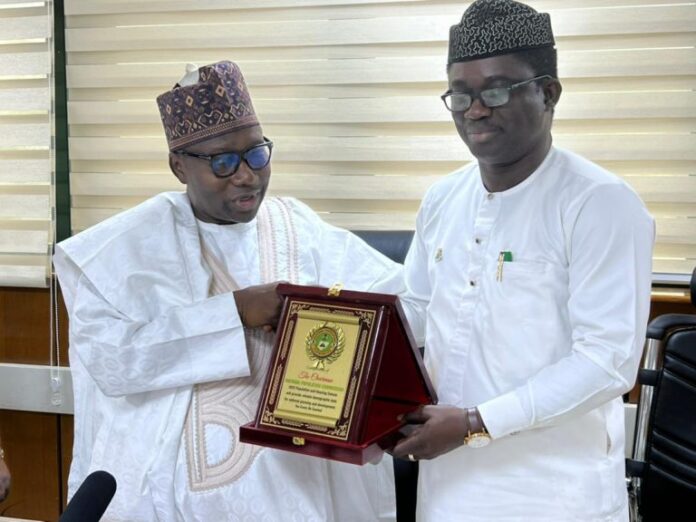 Ajani received the decorations when he visited the Hon. Kwarra at the National Population Census headquarters in Abuja on Monday, 7th November.

The Governor’s aide disclosed that his visit to the NPC was consequent upon the good works of the Commission which was in line with the mandate given to him by Governor Seyi Makinde.

He said Governor Makinde mandated him to reach out to key federal Ministries, Departments and Agencies (MDAs) and other critical stakeholders that could key into the Oyo development agenda in order to build more synergy and robust collaborations.

Ajani noted that issues of population were contentious and required alot of wisdom to coordinate. He added that “as we are approaching census year, Oyo state as a pace setter should take the lead.”

He maintained that, in order to adequately plan as a government, the demography of the people must be taken into consideration while noted Hon. Ajani also stressed the need for more advocacy in our local languages in order to sensitize the people.

He however, requested areas of opportunities that Oyo state government and indigenes can tap into, list of Oyo state indigenes working as civil servants at a directorate level in the commission as well an appeal for accelerated resolve of all pending population census issues with Oyo state.

According to Ajani, the Commissioner representing Rivers State in his remarks, expressed his gladness to the support and encouragement received from the government of oyo state while noting that population census exercise require efforts beyond the Commission and solicited for more robustness among other federating units in the country.

While commending Ajani for his giant strides in deepening the existing relationship Oyo state has with federal MDAs and critical stakeholders, the Commissioner representing Ogun state thanked Governor Makinde’s aide for being the first to extend the gesture of a courtesy visit to the Commission. She however, requested for an official meeting between the Commission and Governor Makinde in Ibadan.

The Commissioner representing Oyo State who couldn’t contain his excitement expressed his delight saying Oyo state now living up to its name as a truly pacesetter state.

He highlighted the some of the achievements of Governor Makinde’s government in the last 3 and half years in office while thanking Ajani for the initiative which according to him would further concretize the relationship between the Commission and oyo state.

He suggested the need to establish working committees set up across all the states before the census year.

The NPC boss, Hon. Kwarra, in his remarks expressed appreciation to Ajani and his team for the initiative while declaring that Ajani’s visit was a welcome development urging other states to emulate Makinde’s aide.

He added that Ajani’s visit has given the Commission the green light to visit Oyo state. The Chairman also hinted that the Commission had been working very hard to provide socio-demographic data for planning purpose for the federal government.

Kwarra however, highlighted some of the programmes being embarked upon ahead of the forthcoming population census to include, pre- census tests to prepare the officers ahead and modify the process, retreats to examine the process, launch of compendium of localities at the state level, launch of e-recruitment portal for 1 to 2 million youths to be engaged in the process while soliciting for more support from state governments across the country.