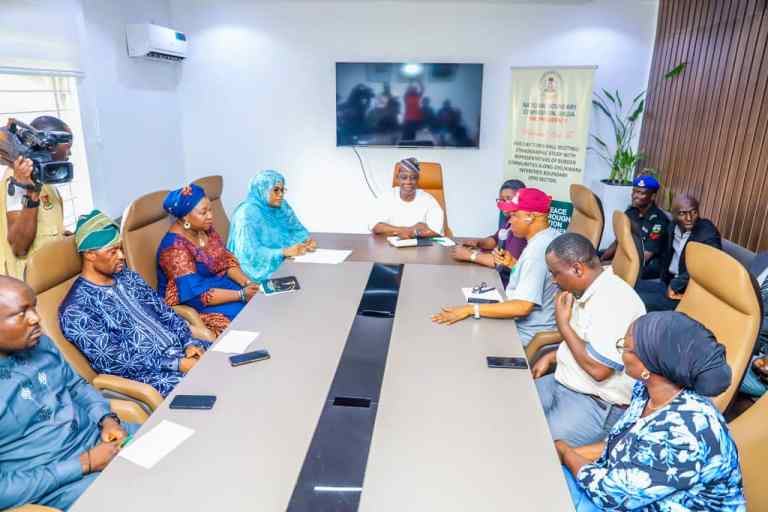 Members of the National Boundary Commission (NBC) under the leadership of Surv. Adamu A. Adaji, have been welcomed by the Oyo State Government while visiting the border areas and communities along the Oyo/Kwara Interstate Boundary.

The delegation led by Barrister Amina A. Nyako met with Barrister Abdul-raheem Adebayo Lawal, the deputy governor of Oyo state, on behalf of Governor Seyi Makinde on Monday in the SSG Conference Hall at the Agodi Secretariat, Ibadan.

Nyako praised the deputy governor for the warm welcome they received and expressed their sincere gratitude to Governor Makinde for approving their request to hold town hall meetings and go on field trips to border towns and villages along the Oyo/Kwara interstate border.

She insisted that they were happy to be in Ibadan, the capital of Oyo State, for a town hall meeting and field trips to the border communities of Kishi (Irepo Local Government Area of Oyo State) and its neighboring villages and settlements that share an interstate border with Baruten and Kiaima of Kwara state.

The visit, according to her, “is intended to harmonize views and positions, update records regarding the geographical composition and identities of people who occupied the border corridor in connection to the boundary line.”

“The data tone gathered from the study is expected to aid the recovery and re-establishment of any missing pillars with respect to the 20% outstanding and undemarcated sectors of the interstate boundary.”.

“I am glad to brief Your Excellency on the status of Oyo/Kwara interstate boundary. 80% out of 100% interstate boundary line have been monumented with primary pillars. However, 20% stretch of the boundary is yet to be physically defined and de-marked on ground. In this regard, National Boundary Commission and the two states are to ensure the maintenance of the defined boundary and the demarcation of outstanding sectors.”

Barr. Nyako praised the Oyo state government for its compassion and the outstanding support provided by the state authorities taking part in the NBC activities, but emphasized the necessity for further collaborative efforts to find answers to the state’s boundary issues.

“We all know that boundaries or borders are part of and parcel of our individual and collective lives, we encounter borders in our everyday chores. If we remain within the border of our family roles, social relationships and official responsibilities, we have peace. On the other hand, if we cross borders, we encounter the consequences, and herein lies the importance of this exercise.”

“As part of change mantra, we want to secure our nation and build an economy worthy of the great nation of 200 million people that Nigeria is. We cannot do this when our communities are engaged in open combats over boundary and territory. The role of NBC is clear, that is onerous resolve the several interstate boundary dispute so as to engage our youths in constructive rather than destructive and effectively delay off security risk along the common boundary.”

“May I use this medium, Your Excellency, to assure you that NBC will try to expedite action more than ever before towards resolution of the disputed boundary that affect Oyo state and its neighbors”, she concluded.

The deputy governor welcomed the team and mentioned that he is from the Kishi town where they intend to travel, highlighting the fact that he is familiar with the boundary because he has been involved in it for about 25 years, particularly when he served as attorney general of Oyo State. He added that the exercise is not unfamiliar to him.

He asserts that Surulere Local Government from the state of Oyo and Kaima Local Government are the boundaries between the two states, which is a contentious area because there have been clashes in the past but we were successful in taking control.

In my experience as a lawyer, it is always difficult to grant a state a boundary, regardless of the outcome of visits, but we can only work toward peaceful coexistence if it is done with mutual understanding. Take Palestine and other nations who are still at war as examples. To ensure that our people live in harmony, we can only make individual efforts.

“About last two weeks, we also flagged off road construction with OSUN state where I have an advice that we should try to start from our own zone but we went for the flagged off where the chief judge of Osun state tried to raise a pointer to let you know how the boundary issues is.”

Lawal stressed that there’s need for joint visit to know what they have established between the two states and if they fail to agree, then they can go to court.

Lawal emphasized that a joint visit is necessary to determine what agreements the two states have made, and that if they cannot come to an agreement, then legal action may be taken.

“I can assure you of a cordial welcome as you sail for Kishi because I have spoken with the right parties, and they will extend their fellowship hands. Reach out to us if you run into any difficulties so we can help you out and make everything as simple and convenient as possible. You can come to my place if you have a major difficulty so that I can make the outing as comfortable for you as possible.

“Oyo is quite peaceful. Don’t be afraid or hesitate. Take advantage of the time, feel secure, and I will continue to pray for you.