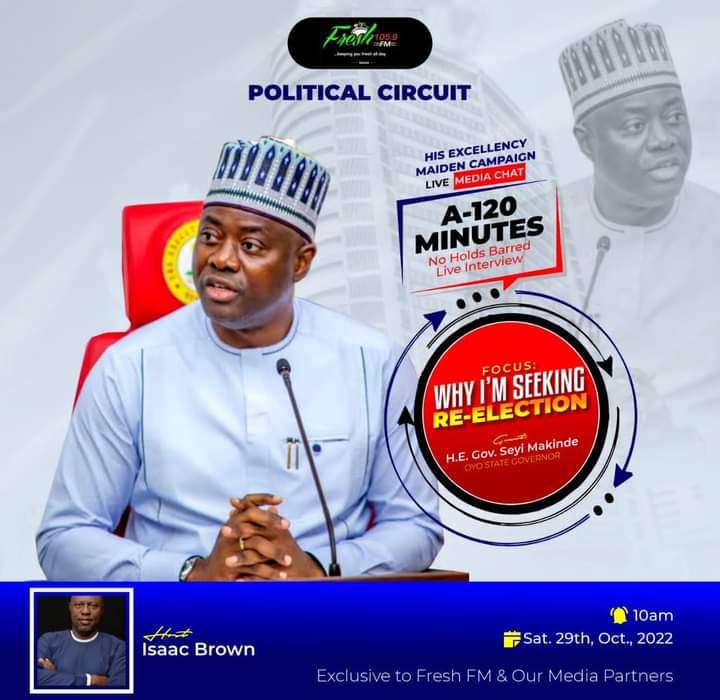 The ruling People’s Democratic Party (PDP) in Oyo state has described the press statement by the opposition All Progressives Congress (APC) in he state as fallacy, sheer display of political rascality in the name of politicking and demanded an immediate apology for having the audacity to further insult the people’s collective sensibility.

The party PDP said it was sad and unhealthy for democratic development in a 21st century for a party as Oyo APC that is reputable for the worst corruption in the history of the state duly rejected and sent out of office by the people, to return in the name of politicking without the slightest atom of remorse whatsoever to talk about good governance. “It is nothing short of brazen insult on our collective sense of responsibility.”

A statement by the ruling party in Oyo state, Akeem Olatunji, and made available to newsmen Monday morning (today) indicated that Governor Seyi Makinde has earned the full trust of the voting masses as evidently shown in the love and affection displayed anytime the governor appears in public to interact with the people.

The party maintained that regardless of the endless lies and unabated false propaganda against Governor Makinde and his government, APC must come to term with reality that it must wait till 2027 when Makinde would have completed his second term to try again if luck would perhaps smile on them again stressing that there is no vacancy at the Agodi Government House as far as 2023 election is concerned.

The APC in Oyo state had alleged that, “the Governor’s interview which lasted over an hour was uninspiring and disappointing as usual”, but the ruling PDP this position is too cheap and patronizing for any serious political party that thought it could do better than Governor Makinde with the available resources under the same prevailing circumstances and time frame of less than four years.

“For eight uninterrupted years, APC in Oyo state held draconic sway, failing woefully in all sector including education, economy, education, agriculture and other critical sectors. It is such a shame in a 21st century democracy that the opposition party was yet to by now admit how many innocent lives of students, pensioners, retirees, market women, artisans were either wasted or lost at different intervals due to APC’s sheer ineptitude and insensitivity to the plights of the people.

“In education alone, LAUTECH students were on a record protracted strike for over two years without any slightest sense of remorse or apology from APC even when their Lagos political Godfather was the prochancellor of the school jointly administered by both Oyo and Osun under APC. Similar situation applied in both primary and secondary sectors leaving Oyo state at a pitiable 27th position out 36 in term of ranking in Nigeria yet Makinde paid the unimaginable price and restored the lost glory returning Oyo state to top 12 states with the best secondary school education quality and standard in Nigeria in less than 4 years with LAUTECH now sitting as number one best state owned university in the country.

“How else could the APC in Oyo state further expose its folly and shameless penchant for unrestrained lies and desperation to return to power at all cost by comparing the present government under Governor Makinde who against their expectation to fail is yet to default a single month on regular payment of workers salaries from the month go! since 2019 up until date despite the pitiable condition the APC led FG has led Nigeria’s economy into? to its administration ridden with sordid experience, calamity, and repeated misfortunes between 2011 and 2023.

“In actual fact, this is like a case of the devil still hoping for a place in paradise because the only group of people in Oyo state today still suffering from acute delusionment and oblivion of current realities in the real sense are the political neophytes and unpopular political elements in Oyo state APC who’s primary focus is to milk all the candidates on the platform of the party from the largesse unremorsefully stolen before the 2023 general elections come to a close”. The ruling PDP said.

The Oyo APC in its usual cacophony of deliberate mischief had also alleged that Gov. Makinde who was actually tutoring the APC elements on the art of good governance, admitted that his administration had failed on security, education, economy amongst others but the ruling PDP said APC was merely trying to play the ostrich saying, “the era of crying more than the bereaved is long gone”, noting that the people of Oyo state have continued to show unprecented and never seen before kind of trust, confidence and love for Governor Makinde than any others in the past.

The ruling party expressed shock at the uniqueness of telling unbridled lies and propagation of sheer falsehood by the APC in the state to deceive uninformed members of the public vowing that no single lie told by the APC would be allowed to slide under the carpet insisting that, “lies and more lies remain the hallmark of APC and will therefore, not allow the opposition party breathe on account of false propaganda as far as 2023 is concerned.

“The fact is that, our response as a party to the endless lies and false propaganda by the APC in Oyo state became imperative and necessitated by our resolve to henceforth, take them on word for word since they’ve shown unremorseful, unattractive, uncivilized, and irresponsible approach to political campaigns even as 2023 beckons, believing that a lie told consistently and repeatedly may be confused to be true, we’re more than ready to drag every breathe out of their nose on that account.

“When you allow pigs drag you to the swam for a duel, you already have those pigs an advantage going into battle in their comfort zone but we as a party resolved and committed to deepening our internal democracy and good governance, we will remain focused on our path and also insist that since delivery of good governance is the basis of all government having failed woefully for eight years at the slightest chance, APC in Oyo state must continue to learn what it lacked from Governor Seyi Makinde.

“APC in Oyo state after a monumental failure after eight years still has the audacity to come to public space to make allegations against an excellently performing Governor Makinde who’s template for delivery of good governance and is being copied and replicated by many APC states including the federal government of Nigeria. This is nothing short of political rascality and reckless statements that are rather unfortunate and sad.