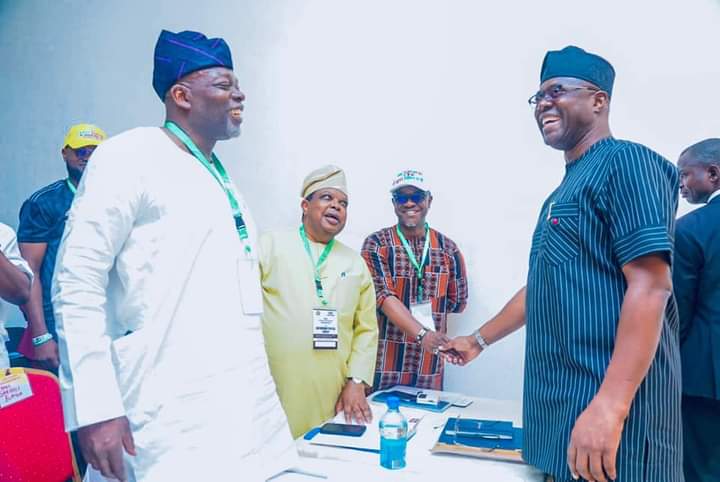 Oyo State Governor, ‘Seyi Makinde, on Wednesday, declared open a two-day workshop for Peoples Democratic Party (PDP) standard-bearers in the National Assembly and state House of Assembly seats as well as members of the Governorship Campaign Council in the state.

At the workshop held at the Supreme Management Training Centre, Adeyi Avenue, Ibadan, the governor declared that his administration has been able to bring about a paradigm shift in governance and politics in the state, a development which he noted has resulted in the massive development ongoing in Oyo State.

A statement by the Chief Press Secretary to the governor, Mr. Taiwo Adisa, quoted the governor as saying that his government has learnt a lot of lessons and would be able to set adequate priorities for the development of the state if re-elected into office in 2023.
He added that the PDP would run issue-based campaigns, noting that as an administration that has been driven by data, logic and science from its first day in office, it would further “sit down, draw plans and follow the plans.”

Governor Makinde, who also declared that papers for the the Iddo-Eruwa Road contract had already been perfected, added that the road would soon be flagged-off.

He called on residents of Ibarapa and other zones of the state to re-elect him and also support all PDP candidates in the forthcoming election.

He said: “I want to use this opportunity to thank everyone. I appreciate us all for attending this meeting, which is aimed at warming us up ahead of the forthcoming campaign.

“The National Assembly candidates have started their own campaigns, and the state, by next week, will start theirs, which will be from the 12th of this month. “By then, all of us would be on the same page.

“For me, I am driven by data, science and logic. And for us, this is an opportunity to formally start the process. “We need to understand the shape which our campaigns will take for the 2023 election. I watched the APC supporters on television yesterday and I discovered their own way of initiating a campaign is a walk-show. Our own way of starting is to sit down, strategise, draw our plans and follow the plans.

“In 2019 elections, we did not just engage the people. We sat down, drew the roadmap for accelerated development of Oyo State. We put the document in the public domain and, up to this moment, it has continued to serve as the compass of development for us in Oyo State. So, this is not something new.

“People who think we don’t understand politics may think what we are doing is ‘political theory’ but this same theory won the 2019 election for us.

“So, today, they have called in experts to speak to us on the political situation in the state, the strategies to be adopted, the challenges we are likely to be faced with. This is because no two elections can be the same. The factors that worked for us then are different from what we have on ground now. “Then, people didn’t know us but they now know us.”

The governor, who admitted that there were a few areas where his government could have done better, said: “There are areas where we may have made mistakes. There are also some aspects we didn’t prioritise. But I am sure that the Ibarapa people will give us their votes because the paper works on your road have been brought to my table and we will flag it off shortly.

“So, don’t let us see this exercise as a waste of time. “Yes, politicians want immediate money before they can engage in mobilisation and all that, but, for us, we are trying to cause a paradigm shift in politics and governance.
“Before the end of this 2-day exercise tomorrow, we must identify a representative that we can hold responsible to deliver each of the 351 wards we have in Oyo State.

“We have 51 positions in Oyo State, which we are fighting for. We have the governorship, deputy governor seat and others, and by the grace of God, all the positions will be occupied by those of us in this hall.

“For some of us who are expecting one thing or the other and are yet to come through, I can assure you that your time is coming. For me, the journey has not been smooth. In 2007, I failed. In 2011, I also failed. In 2015, the same thing happened.

“When we are faced with challenges, they are to strengthen us to carry through the journey when we are finally in the position we desire.
“We are in this together and we will succeed together. Most of the things we will agree on here will be executed when we get to the field.
“What is at stake today in Oyo State is the margin of votes. The last time, we defeated other parties by 154,000 votes. “We don’t just want to win but triple or quadruple the votes we had in the last election. We are talking about 600,000 votes between the PDP and other parties and we can do it.”

The governor’s entourage to the workshop included the Deputy Governor of the state, Barr. Abdulroheem Bayo Lawal; Speaker of the State House of Assembly, Hon. Adebo Ogundoyin.