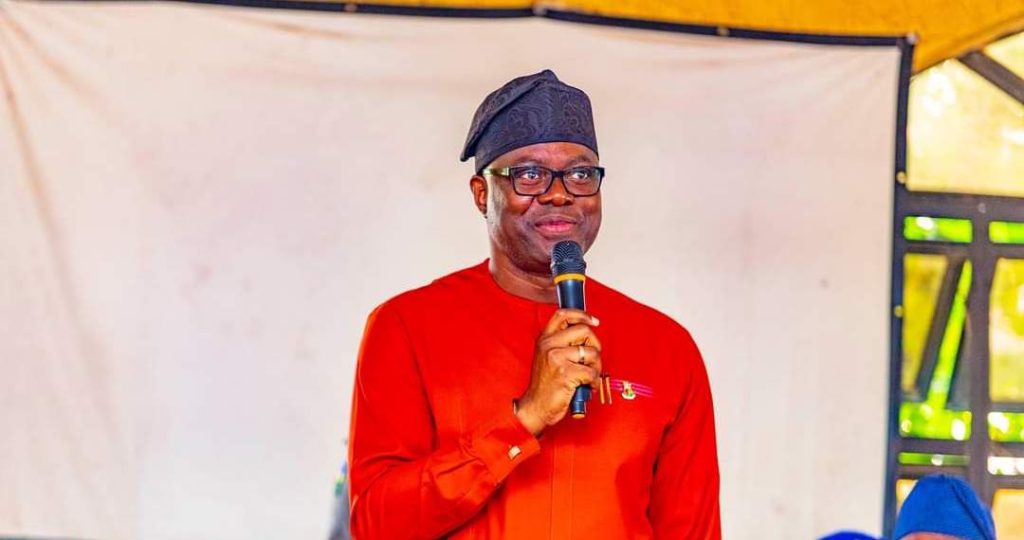 Four States of the Nigerian Federation; Oyo, Ogun, Osun, and Kwara surely have some things in common. As we speak, one of such affinities is, however, not politics. There is geographical contiguity, there is language affinity and to a large extent ancestral commonality, at 100 percent for Oyo, Ogun, and Osun but to some percentage for Kwara State.

But there is a political divide. While Oyo State is being administered by Governor Seyi Makinde, on the platform of the Peoples Democratic Party (PDP), the three others are being governed by his colleagues, who belong to the All Progressives Congress (APC).

As we have seen in this country, political divides can be as all-encompassing as you can imagine, especially when one group brands itself as Progressives, while the other is branded as Conservatives. Such divides can be as strong and solid as the famed Berlin Wall. It means that policies and government practices would be diametrically opposed and the belief is that the main actors in such political structures can only exchange faint-hearted pleasantries at social functions.

But for a man like Governor Seyi Makinde, who is bent on resetting the widely held nuances and idiosyncratic paradigm of governance, there is always a meeting of the minds when development is the focus.  To him, political party affiliations should not constitute a barrier to growth. For the man fondly called GSM by his admirers, poverty, lack and squalor know no barriers of politics, ethnicity, or religion. Development and his avowed poverty to prosperity mantra in Oyo State are of universal appeal. And in a little over three years of governance in the Pacesetter State, he has demonstrated fidelity to such ideals in voluminous measure.

Resolving the LAUTECH debaclelll
Take the challenge of jointly running the Ladoke Akintola University of Technology (LAUTECH), Ogbomoso with Osun State, for instance. From 2007 thereabouts, it had become obvious to the two owner states that the marriage that produced LAUTECH had developed ‘K-legs’ which could no longer be straightened. But while the two governments were convinced of the need to effect a divorce from the union, none was clear about the pathway for peace. The states were stuck on how to initiate a win-win solution and the University was the worst for it.
The government of Governor Adebayo Alao-Akala (Oyo) and Prince Olagunsoye Oyinlola (Osun), both of the PDP, failed to find a way out. The same was true of the Governor Abiola Ajimobi and Rauf Aregbesola-led APC governments in the two States. When the Makinde-led PDP government and the Gboyega Oyetola-led APC government entered into negotiations on the ownership of LAUTECH late in 2019, only a few nursed the belief that something concrete would materialise.

But exactly a year after the inauguration of the joint negotiating committees, success was recorded as the National Universities Commission (NUC) announced the sole ownership of LAUTECH by Oyo State in November 2020.

By the second half of 2021, reports of kidnapping and security breaches of all kinds around the boundaries of Oyo and Ogun states had become common. Governor Makinde, through the instrumentality of the Oyo State Security Trust Fund headed by CP Fatai Owoseni (rtd), immediately took steps to stem the tide. A security surveillance post fitted with high-caliber cameras was erected at the Oyo/Ogun boundary on the Ibadan/Abeokuta  road and within weeks, a check was put on the nefarious activities around that axis.

That was not all, the governor, in consultation with his Ogun State counterpart, Prince Dapo Abiodun, floated the Oyo/Ogun Security summit held in Abeokuta on February 2, 2022.
A communiqué issued at the end of the summit indicated that the two States have resolved to tackle insecurity challenges including crimes such as kidnapping, banditry, fraud, and ritual killings, among others, frontally by setting up a high-level joint security committee to oversee security matters along the boundary communities. The meeting equally agreed to set up a Joint Border Security Task Force with membership drawn from various security agencies in each state.

Makinde said of the summit: “I am happy that this is not about partisan politics. My brother is from the APC and I am from PDP. We are having security issues along our common borders. We have had two PDP governors in these states and I did not see anywhere where they had this kind of collaboration. Again, two APC governors were in both states and could not achieve anything. Today, we have APC and PDP governors and we are here to collaborate, and at the end of this Technical Session, what we hope to achieve is a long-lasting solution that will benefit the good people of both states.

“My brother (Dapo Abiodun) and I have an absolute commitment to the security of lives and property within the two states. We have experiences across the states and what this meeting will do for us is to be able to share these experiences and look at those decisions we can take jointly to improve the security situation in our states.”

According to him, these are just two out of 36 states adding: “When the two States become more peaceful, the other 34 states can take a cue from us.”

Infrastructure with focus on interstate commerce
On May 18, 2022, Governor AbduRahman AbduRazaq of Kwara State was the guest of Governor Makinde in Ogbomoso, where the duo flagged off the 76.76-kilometre Ogbomoso-Iseyin road. The Kwara State helmsman hailed Makinde for pioneering development initiatives that seek to enhance the security of lives and property as well as economic prosperity. He promised to fix similar roads that link the Ogbomoso/Iseyin axis from the Kwara State end so as to enable his state to benefit from the commodity market hub Ogbomoso is fast turning into.
The Kwara governor added: “Similarly, it (the road) represents a shortcut for those coming from Northern Nigeria, including Kwara, who are traveling to Iseyin or headed to Igboora or Abeokuta. In all of these, you are creating huge economic values along this axis. You are also saving lives because the ever-busy Oyo/Ogbomoso road will be decongested.
“So, I commend the many efforts of Your Excellency in this regard. These are projects for posterity, which I think build on some laudable steps of your great predecessors. History will not forget.
“As your neighbours, Kwara will always collaborate with Your Excellency on all fronts to improve the lives of our people. I urge that our bipartisan efforts to jointly secure our border towns and make them safe for socioeconomic development should continue.”
Another show of Governor Makinde’s commitment to development beyond the boundaries of politics came into the open on June 27, 2022, when the Oyo State Commissioner for Public Works and Transport, Prof Dahud Kehinde Sangodoyin held a joint press conference with his counterpart from Osun State where they announced the decision of the two states to jointly rehabilitate and reconstruct the 83.7km Iwo Road interchange- to Ogunremako Junction-Lalupon, down to Iwo-Osogbo road. The road, which is a major link between the neighbouring South-West states, and which is partly owned by the two states and the Federal Government collapsed years ago. Commuters on the Ibadan/Iwo and Iwo/Osogbo axes have had to suffer traffic snares and avoidable accidents as a result of the deplorable condition of the road. But with Makinde’s developmental objectives that transcend political boundaries, succour is on the way.
According to the Commissioners, who addressed the media on the authorities of Governors Makinde and Oyetola, Oyo State will handle 29.2 kilometres of the road project, terminating its half at the Ibadan/Iwo boundary, while Osun will take the project through Iwo to Osogbo, the Osun State capital. If the saying where a new road goes, development follows is anything to go by, there cannot be any debate about the fact that tremendous development will trend in that axis once the road is fixed.
But Makinde’s development beyond political frontiers outlook did not just start midway into his administration. It is something he had demonstrated from the start. It is on record that despite being the only PDP governor among the six governors of the South-West states, the Oyo State helmsman was able to galvanise his colleagues in the zone to midwife the Western Nigeria Security Network outfit code-named Amotekun. The community policing initiative has since its inception, provided the needed support for the conventional police and helped to stem the tide of insecurity challenges across the states of the South West.
So, for Makinde, the pursuit of development, the poverty to prosperity mantra, is one that knows no boundaries, whether ethnic, religious, or political.

•      Adisa is the Chief Press Secretary to Governor Seyi Makinde