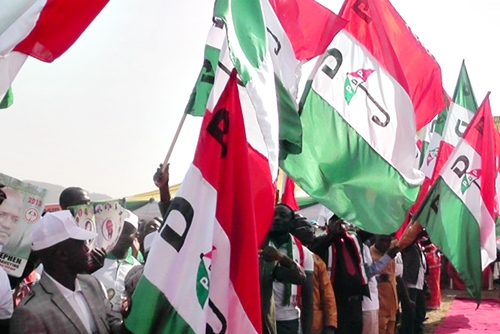 The ruling People’s Democratic Party (PDP) in Oyo state has cautioned the All Progressives Congress (APC) against making baseless and frivolous allegations against Governor Seyi Makinde in order to remain relevant in political events ahead of the forthcoming 2023 general elections.

This was as the ruling party explained that only the nation’s electoral umpire, the Independent National Electoral Commission (INEC) has the constitutional right and power to relocate or transfer polling unit(s) not Governor Seyi Makinde or any elected public office holder for that matter.

Consequently, the party warns that raising false alarm, spreading lies and mischiefs as political tools during political campaign season is old fashioned as the people have become more politically conscious and sophisticated to be swayed by cheap propaganda and as such APC in Oyo state should desist from what it called self destructive adventure.

The ruling party in Oyo state in a statement made available to newsmen on Monday morning (today) by its Spokesman, Akeem Olatunji, debunked any interference or connivance with INEC as the constitutionally empowered electoral umpire on any of its works stressing that the APC in Oyo state was merely exposing itself in terms of what it is capable of doing out of desperation and perceiving the PDP in such distasteful light

The Oyo state chapter of the APC on Sunday (yesterday) had alleged that it had purportedly uncovered a plot about Governor Makinde and the PDP conniving with INEC to change some polling units tagged as strongholds of the opposition party with a view to frustrating voters come 2023.

According to the Oyo state PDP, the entire content of the said allegation by the APC was laughable describing an example of a dog claiming to have a territory in a kingdom controlled by a Lion saying “you know it is either such dog was high on something or making taking itself to the Lion as a meal.”

The ruling party in the state said INEC in its wisdom to improve on Nigeria’s electoral system created no fewer than 56, 872 new polling units across the country in year 2021 taking the total number of polling units in Nigeria to 176, 974.

The party added that prior to the recently held governorship election in Osun state, the INEC announced and relocated some polling units to deepen the credibility of the process in its wisdom. The party added that INEC in exercising its constitutional powers had also relocated some polling units from churches, mosques, palaces and other areas for several reasons.

The Oyo state PDP described the APC’s allegation as mere blackmail aimed at portraying INEC, the ruling party and the Governor in bad light stressing that a political party that told brazen lies unremorsefully to get to power would boldly tell more and worse lies to retain power noting that the opposition party still grapples with the reality of its rejection by Nigerians at all levels.

The ruling party however, stated that the opposition party was defeated hands down where it described as its stronghold in the 2019 governorship and more of its acclaimed strongholds have succumbed to the PDP on account of good governance, qualitative and purposeful political leadership under Governor Makinde maintaining that 2023 victory will be greater and monumental as it would culminate into the final burial of the APC in Oyo state.

“The allegation levelled against INEC, PDP and the wonderfully performing Governor, Seyi Makinde by the APC in Oyo state was nothing more than attention seeking move that would pass for a baby crying to get mother’s attention to be fed with breast milk.

“As an informed stakeholder if they truly are, and as a political party that was at least once in government in the state, they should know that INEC as the nation’s electoral umpire has the powers to relocate or change polling units so long as such move is presumably good to deepen the electoral process.

“For Heaven’s sake, the entire nation is preparing for next year’s general elections not some ward or local government elections and the APC was busy crying foul and rasing false alarm just to be seen as still existing. At least if you want to noticed as a party engage in meaningful venture that’ll be of public interest.

“This is particularly so, because when you tell lies brazenly and unremorsefully just to lie your way to power, you will tell more horrendous and mouthwatering lies to keep such office and then we ask, how long are we going to allow these set of charlatans and political neophytes drag us backwards by at least 10 years every time we make landmark success of moving forward in just 3 years?

“It is sad that APC is yet to learn anything from our political development in the state and it is even more worrisome that the opposition party has continued to deny itself the obvious reality which is that Nigerians at all levels have publicly and openly rejected the APC as a calamitous party. This obviously occasioned why they’re incapable of engendering peace in their hearts as politicians other than sheer hate and consistent propagation of falsehood.

“Unfortunately for them, the good people of Oyo state have grown more politically conscious, sophisticated and are more participating more inclusively now than ever before therefore, the APC should wake up from its self inflicted delusion of thinking the good people of Oyo state could still fall for such cheap lies and political blackmail as political tools aimed at dissuading unsuspecting members of the public.

“Even their acclaimed stronghold, wherever that means to them is now firmly under PDP because in Oyo state, it is not just about political parties and politicking, it is primarily about delivery of good governance under a purposeful leadership and that leadership is what the PDP has provided and will continue to provide which is why the people passionately love Governor Makinde and the PDP. They should continue in their self destructive adventure while we continue to bring more happiness to our people.” The PDP stated.