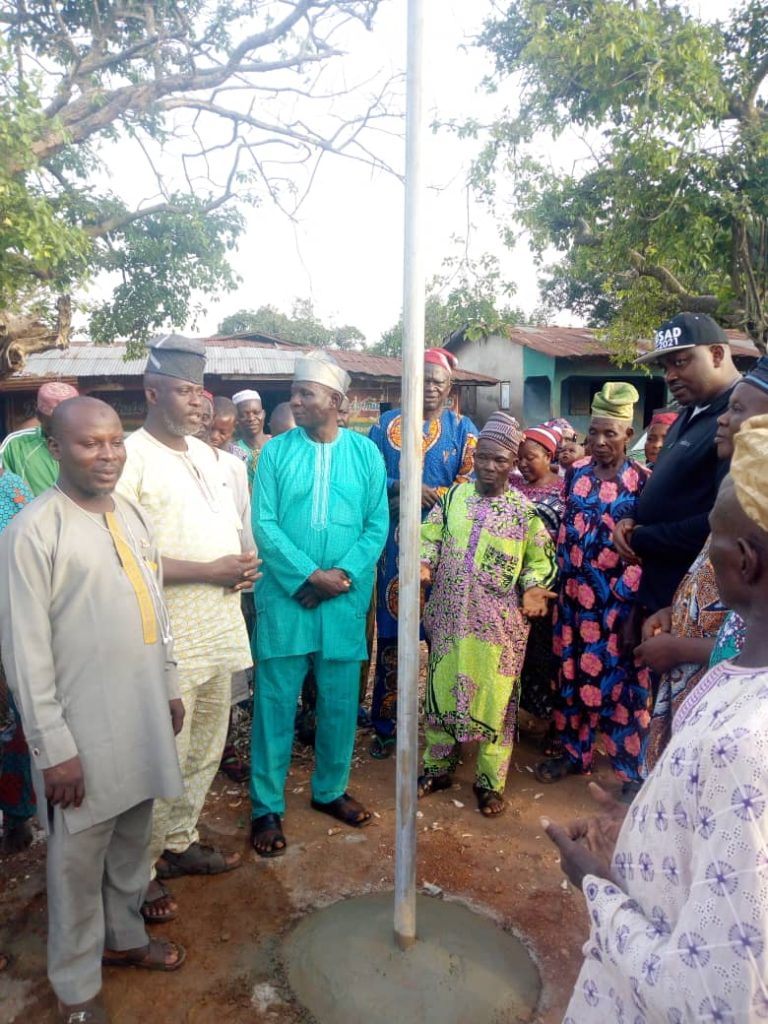 In a statement released and made available to Heritageecho.com, through Honourable Sakiru Ojo, in commemoration of his 100 days in office after his election as the Executive Chairman of the Local Government, Hon Arowosaye has taken another giant step by putting smiles to the faces of villagers and given them new hope of good life.

The Market Women, Farmers and Villagers of Omooba Lanite Market at Omooba Village trooped out to receive the Pragmatic Chairman for the flagging of the Project. On behalf of the Entire Omooba Community, Baale Omooba, Chief Liadi Aderinto appreciated Hon Arowosaye Saheed for the opportunity given to them to install this Solar light and this will go a long way in their memory, because, this is an unprecedented Project that will serve a lot of purposes, first, it will illuminate the darkness at night and secondly, will reduce the crime rate in our area and thirdly, will continue to beautify our Place.

In his response, Arosad informed the Villagers that, the Solar Street light will cover all the ten wards of the Local Government and that, the Asphatic tarring of Akinmorin-Omooba-Kiyeseni is in pipeline while that of Oriawo junction to Laroyan Village has been approved and the work will begin in earnest.

Comrade Alawode, The Founder of Isokan Solidarity in Oyo East Rural Areas expressed gratitude to Hon Arowosaye for being a good listener, exemplary Leader and a Politician with the heart of Gold who cherish the well being of his people. He further urged the villagers to make judicious use of the solar light and keep maintaining it’s safety.

In the same vein, at Owode Elete village of Apinni ward 05, another installation of Solar Street light was carried out today where the entire Community, Villagers & Women were pouring Prayers on Hon Arowosaye for counting them worthy of this benefit. According to Mr Usman Bello, who spoke on behalf of the people described Hon Arowosaye as a visionary politician who plan better things for his people because, this is the first time of having this kind of Project.

In his own remark, Hon Arowosaye assured the Villagers that, this is just a tip of an ice berg, because, in a couple of weeks and as soon as the Cabinet is formed, all roads leading to the villages will be given due attention and their maternity centres will also be given priority attention.