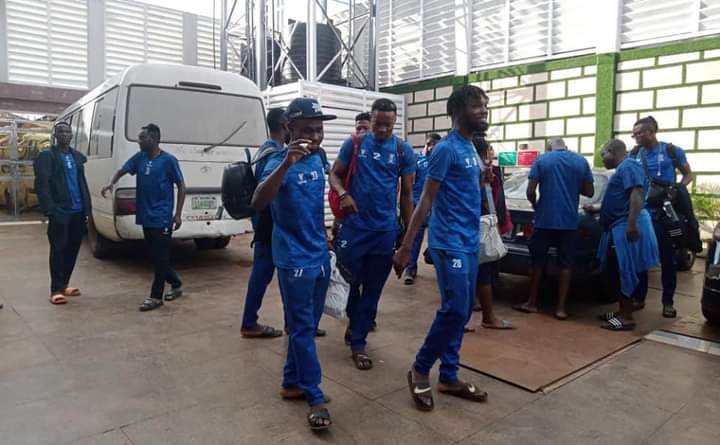 Shooting Stars Sports Club (3SC) of Ibadan, arrived in Enugu, the capital of Enugu state on Sunday, ahead of the 2021 Nigeria National League (NNL) Super Eight play off, tagged ‘Enugu 2021’.

The Oluyole Warriors, who had an impressive run in the regular season of the 2020/21 season of the NNL, emerging tops of the Southern Group B1, arrived the coal city on Sunday afternoon.

In a statement released and made available to heritageecho.com, despite the hectic journey, the officials and players of the Ibadan soccer lords, beamed with confidence on arrival, expressing their readiness to pick the much sought after promotion ticket, which the team had missed by the whiskers on two consecutive ocassions.

Addressing the players on arrival, the Team Manager of the club, Dimeji Lawal, and Chief coach, Edith Agoye, urged them to be focused as they face the final hurdle for a return to the elite league.

‘We all know why we are here and what is being expected of us. Therefore I want you to show them that you are superior. Be ready to give your best because we cannot afford to fail this time around”, said Kabongo as the TM is popularly called.

” Gentleman, just like the TM said, we are here for business and I’m sure you all know that it is a serious business which we must take seriously. I believe we will surely get it done and achieve our desired goal”, added Esin as coach Edith Agoye is fondly addressed.

The players in seperate discussions, promised to give their all to pick the ticket so as to justify the huge commitment of Oyo State Governor, Engineer Seyi Makinde as well as the support of all the club’s supporters and fans to the team.

Shooting Stars will battle Bendel Insurance, Ekiti United and Remo Stars for one of the two tickets in the Southern conference, while the quartet of Gombe United, Niger Tornadoes, El Kanemi Warriors and DMD will fight for the two slots in the northern conference.

The Super 8 contest is slated to begin on Tuesday, September 7 through Saturday, September 11, with all matches in both conferences holding at the Nnamdi Azikiwe Stadium, Enugu, otherwise known as the Cathedral.