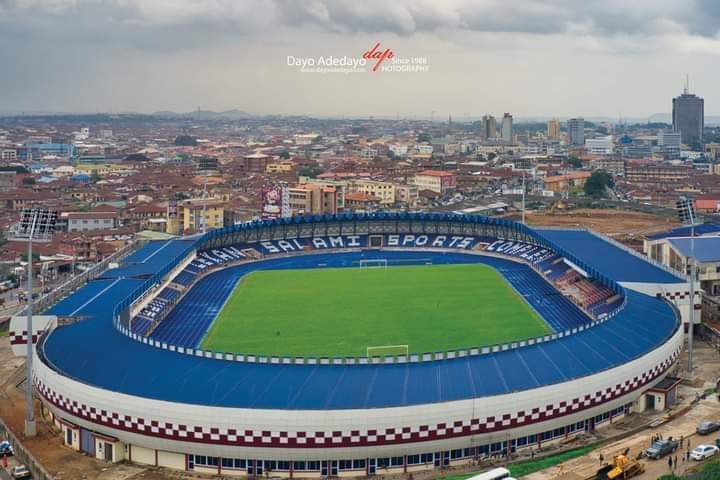 The Peoples Democratic Party (PDP) Oyo State chapter, has declared that the newly remodelled Lekan Salami Stadium, Adamasingba in Ibadan is a clear testament that Governor Seyi Makinde is the engineer of modern Oyo state.

The ruling party made this known in a press statement signed by its State Publicity Secretary, Engr. Akeem Olatunji and made available to newsmen on September 1st, 2021.

The newly remodelled stadium according to Oyo State PDP is now at per with the standard of global football stressing that the Seyi Makinde led government has put Oyo State on the global map for international recognition in the sporting world.

Oyo State PDP noted that, just like the famous Cocoa House in Dugbe which was built by late Chief Obafemi Awolowo with proceeds from sales of Cocoa and has remained one of the best legacies of the sage in the entire south west region of Nigeria, Makinde has also given not only Oyo state but the entire south west a legacy that will last for many generations to come.

The ruling party in Oyo state said no administration in Oyo state after the 10,000 capacity Lekan Salami Stadium was built in 1976 has deemed it fit to restore it’s lost glory as one of the best stadia in Nigeria after it’s dilapidation until the present administration under Governor Seyi Makinde thought it wise in it’s giant stride to return Oyo’s pacesetter glory.

The statement by the ruling party indicated that Oyo is now adequately positioned to among other great benefits improve on it’s internally generated revenue, discover raw talents locally and exposing them to the global stage as well as providing a platform for sporting business to thrive in the state stressing that Seyi Makinde has now been justified unarguably as the Awolowo of this era.

The statement reads in part: “To say that Governor Seyi Makinde in his administrative acumen and great manager of scarce resources is our “Starboy” in PDP as well as our pride is saying the least and the obvious truth because the Governor’s personality and administrative skills have endeared our great party to the masses such as evident in our ongoing membership registration drive.

“The popular Lekan Salami Stadium otherwise called Adamasingba stadium which is the official stadium of Shooting Stars football Club now 3SC FC during its inglorious days when the sporting facility was still in good condition provided unspeakable motivation for different athletes making use of the sporting facility to dominate both national,international and continental sporting events.

“Shooting Stars FC” is an extremely successful team that has many fans both nationally, internationally and continentally. They won the championship in 1993. The potential of the sporting complex has however not been optimally utilised due to rot and decay making most of it’s facilities moribund as a result of what many believe is a lack of maintenance culture by successive governments until the emergence of the Governor Seyi Makinde led administration in 2019.

“Our joy as a people and as the ruling party has no bound as the entire state prepares to witness the official Commissioning and inaugural football match with a Slovenian based team at the newly reconstructed Lekan Salami Stadium with all the required modern facilities expected of an international stadium now in place.

“It is now an undebatable fact that Governor Seyi Makinde has earned the title of “Engineer of the modern Oyo State” by reason of the massive infrastructural development currently ongoing making the whole of Oyo state a construction site according to political analysts and public commentators.

“We as the ruling party will continue to stand by the people and will not disappoint the good people of Oyo state who have shown such amount of impressive support for the PDP led government in Oyo state under the leadership of Governor Makinde having seen clearly the failure, incompetence, deceits, treachery, and false propaganda of the last administration and the people’s firm resolve never to make such costly mistake again of returning dictators back to a democratic setting again.”