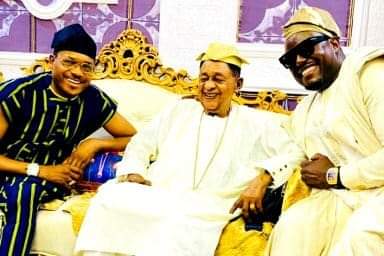 . “as illustrious and industrious sons of Oyo State, both distinguished gentlemen have done well to plant the name of the state on the lips of all and sundry””, says the monarch

All roads will today lead to the ancient Palace of His Imperial Majesty, the Alaafin of Oyo, Oba (Dr.) Lamidi Olayiwola Adeyemi 111, where captains of industry, luminaries in the entertainment world, top public functionaries, distinguished members of the National Assembly, traditional rulers, and other very important personalities from.across the country and beyond will attend the colourful chieftaincy installations of the two inseparable, awesome, humanists and intimate friends who are business icons turned mentors and angel investors .

In a statement released and made available to Heritageecho.com correspondent, By Bode Durojaiye, Director of Media and Publicity to the Alaafin of Oyo.

While Dr. Babajide Agunbiade will be conferred with the prestigious chieftaincy title of ATOBAASE of Yorubaland, Honourable Shina Peller will be installed as AYEDERO of Yorubaland.

Both of these highflyers have earned the grace of the Paramount Ruler.

The Alaafin of Oyo’s recognition of Peller and Agunbiade is one of the cheering news in the Pace Setter State.

As illustrious and industrious sons of Oyo State, both distinguished gentlemen have done well to plant the name of the state on the lips of all and sundry.

Their meritorious and invaluable contributions have raised the state a few bars above its peers, earning them royal appreciation and laudation.

The chieftaincy titles, therefore, are meant to be distinguishing feathers on their caps.

Dr. Agunbiade is one of the big characters in the oil industry, with more than two decades of experience under his belt.

A leading global expert in offshore production, Agunbiade has excelled in his career, but even more in his devotion to his people.

His Jide Agunbiade Foundation is well-known for its contributions to the lives of the needy, having made primary healthcare, access to basic education and community development within arm’s reach of the underprivileged.

Peller, on the other hand, a resilient Federal Lawmaker and man of the people, has brought nothing but pride to bloom in the hearts of the people of One ogun area of Oyo State.

His timely dedication and commitment for the underprivileged have been no less effective in minimising the suffering in Oyo State.

The guiding principle of these men of moral compass is that success will come and go, but integrity is forever.

Integrity, according to them, means doing the right thing at all times and in all circumstances, whether or not anyone is watching.

In an interview with the duo, they pointed out that it takes having the courage to do the right thing, no matter what the consequences will be.

” Building a reputation of integrity takes years, but it takes only a second to lose, so never allow yourself to ever do anything that would damage your integrity.

“Investors understate a company’s value in order to negotiate a lower valuation in a deal. Customer service representatives cover up a mistake they made because they are afraid the client will leave them. Employees call in “sick” because they don’t have any more paid time off when they actually just need to get their Christmas shopping done.

“The list could go on and on, and in each case the person committing the act of dishonesty told themselves they had a perfectly valid reason why the end result justified their lack of integrity”.

They asserted that, “it may seem like people can gain power quickly and easily if they are willing to cut corners and act without the constraints of morality. Dishonesty may provide instant gratification in the moment but it will never last.

“I can think of several examples of people without integrity who are successful and who win without ever getting caught, which creates a false perception of the path to success that one should follow. After all, each person in the examples above could have gained the result they wanted in the moment, but unfortunately, that momentary result comes at an incredibly high price with far reaching consequences.