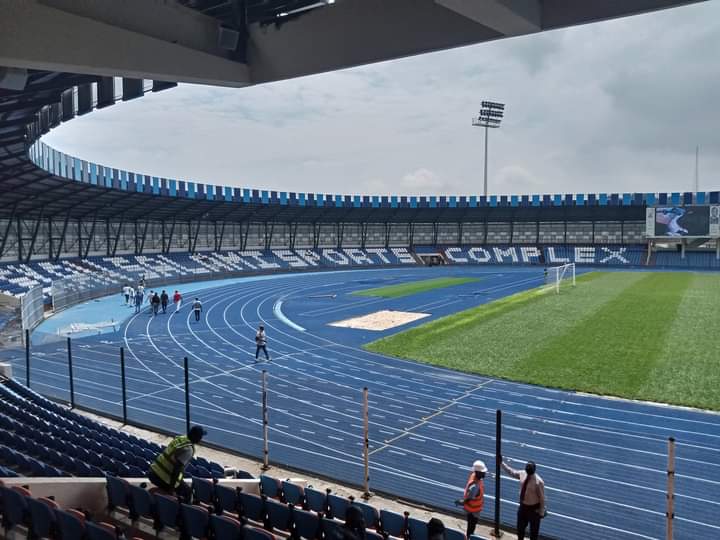 The Lekan Salami Sports Complex, Adamasingba Ibadan will be a world class stadium after the completion of the ongoing renovation works at the stadium.

The Project Manager of the Construction Outfit handling the remodeling of the stadium, Peculiar Ultimate Concerns Limited, Engineer Femi James said this to news men shortly after the inspection of the stadium by the Inspection Committee set up by Oyo State Governor, Engr.Seyi Makinde.

Engineer James boasted that the remodelled stadium will rub shoulders with the best stadia in Nigeria and other parts of the world after its transformation.

“We’re constructing a world class stadium that is designed to host any international sports competition. All works being done on the stadium are in compliance with FIFA specifications and international best standards. The stadium is being equipped with the latest state of the art facilities. For instance, the score-board we are installing here cannot be found in any other stadium in Nigeria”, the Project Manager said.

Speaking on the upgrade of the facilities at the stadium, Engineer James said a lot of new amenities had been added to the existing ones which were also improved upon.

“We have replaced the artificial turf at the mainbowl with natural turf to meet the requirement of FIFA. Also, the stadium capacity has been increased from 8,000 to 10,000 while new tartan track has been laid and the two old changing rooms have been replaced with four modern changing rooms. We also have four new flood lights in place, with the addition of a brand new studio and a VAR room which were not there before”, he said.

The Project Manager further disclosed that new structures were being put in place while old buildings were being given facelifts.

“We’re building a new indoor hall housing wrestling, gymnastics, boxing and kick boxing gyms as well as a multi purpose outdoor court for basketball, handball and volleyball games. We’re also coming up with new swimming pool and a Five -A – Side court. Aside these, we are also resurfacing the Tennis Court, Handball Court and other courts”, Engineer James told sports journalists.

The Project Manager stated that the mainbowl is ready for the commissioning, expected to be performed by Governor Seyi Makinde on Wednesday 1st of September, while all works on other parts of the stadium would be completed by December 2021.

After the commissioning, other places like the swimming pool, the training pitch and the multipurpose court would be completed by December.
So, by December 2021, everything in the sports complex will be ready for use”, Engineer James explained.

The Project Manager concluded by saying that after the completion of the remodeling works, Lekan Salami Stadium will be a mecca for athletes, coaches and sports lovers from various places.