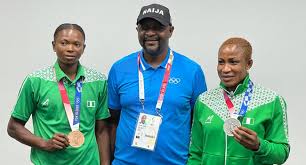 The Federal Government has rewarded Blessing Oborududu and Ese Brume with $10,000 and $7,500 respectively for their impressive outings at the Tokyo Games.

Brume won Nigeria’s first medal in the competition on Tuesday after she finished third in the long jump event while Oborududu got silver in the 68kg women’s freestyle wrestling later on the same day.

“There’s no point delaying the reinforcement of these athletes who have made the country proud, that is the reason they were rewarded immediately for their record breaking performance,” the Minister of Youth and Sports, Sunday Dare said while presenting the prize to both athletes in a ceremony held at a hotel in Tokyo on Tuesday.