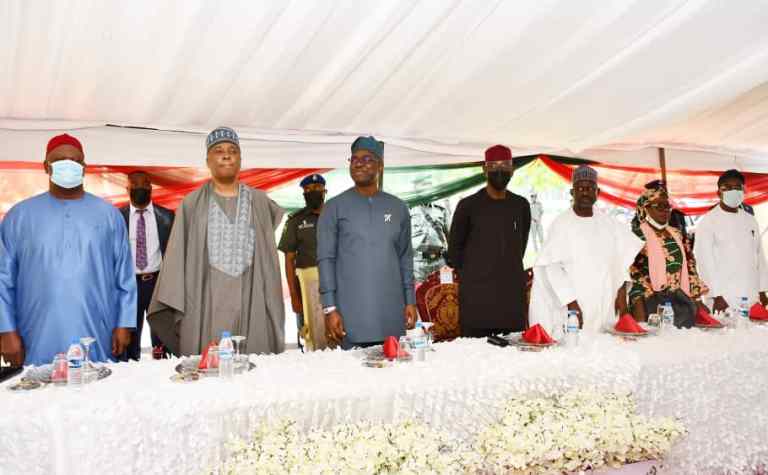 Oyo State governor, ‘Seyi Makinde, said on Tuesday that he would address all grievances within the state chapter of the Peoples Democratic Party (PDP) with a view to making the party more formidable and well-positioned for victories in future elections.

He maintained that stakeholders of the party in the state must never allow their grievances to get to the point of destroying the party, urging everyone to put their misgivings behind them.

The governor stated these at the Government House, Agodi, Ibadan, during a meeting between the party’s stakeholders and the Peoples Democratic Party (PDP) National Reconciliation and Strategy Committee led by former Senate President, Dr. Bukola Saraki.

Other members of the reconciliation committee in attendance included former President of the Senate and former Secretary to the Government of the Federation, Senator Anyim Pius Anyim; former Governors of Cross River and Gombe States, Senator Liyel Imoke and Alhaji Ibrahim Dankwambo and former Majority Leader of the House of Representatives, Hon. Mulikat Akande-Adeola.

A statement by the Chief Press Secretary to the governor, Mr. Taiwo Adisa, quoted the governor as promising to address all grievances by reaching out to every aggrieved party within a short time.

Governor Makinde, who stated that he has been doing things that are fair and could promote brotherliness and strengthen the party in the state, noted that since the grievances within the party have persisted, it meant that the party must try again to solve the problem.

He called on all sides to unite in the interest of the Oyo State PDP, stating that he has no personal animosity towards anyone and that his desire is to see the party produce more winners in the state in future elections.

Addressing newsmen shortly after the meeting, the chairman of the reconciliation committee, Dr. Saraki expressed delight with the outcome of the meeting, which he termed a family meeting of the PDP.

He stated that the meeting resolved that all stakeholders should work together under the leadership of Governor Makinde to ensure the victory of the PDP in future elections in Oyo State and at the national level.

Saraki commended the stakeholders for what he described as the beginning of a new chapter in Oyo State PDP, noting that Governor Makinde has been doing excellently well in terms of governance and that if the same mileage is achieved in the area of politics, then the PDP will become unbeatable in the state.

He said: “As you know, we are here as part of the National Reconciliation and Strategy Committee and we are very happy with what transpired this afternoon here with the PDP family.

“We have resolved that all the party members work closely together under the leadership of our performing governor, Seyi Makinde, and we have asked that all the areas of differences should be put aside. And they should work towards ensuring that the PDP is victorious, not only in the state but at the national level.

“I want to commend all our stakeholders who have agreed that today is the beginning of a new chapter in Oyo State. I also want to thank the governor as well for the statement that he made that he is a beneficiary of what the party is doing and that he hopes that when he finishes his term, people in the PDP will continue to benefit from it.

“So, everyone here is committed to ensure that PDP continues to work and strive hard.

“This is the beginning but we have started the process. The commitment has been made by the governor and the stakeholders and this has started materializing  because some steps have already been taken today. We are very confident for coming out of it.

“Definitely, there is a new dawn ahead of us here in Oyo State. We know that our governor is performing. In the area of governance, he is doing very well and we are proud to be associated with him.”

The former Senate President added that the efforts being made by his committee were aimed at consolidating on the formidability of the PDP in Oyo State, stating that with the calibre of people that attended the peace meeting, he was sure that a new dawn had started for the party.

“These are not issues that are not surmountable. The governor has made the commitment and we all know him as a man that will deliver by his performance and antecedents. So, we are confident,” he added.