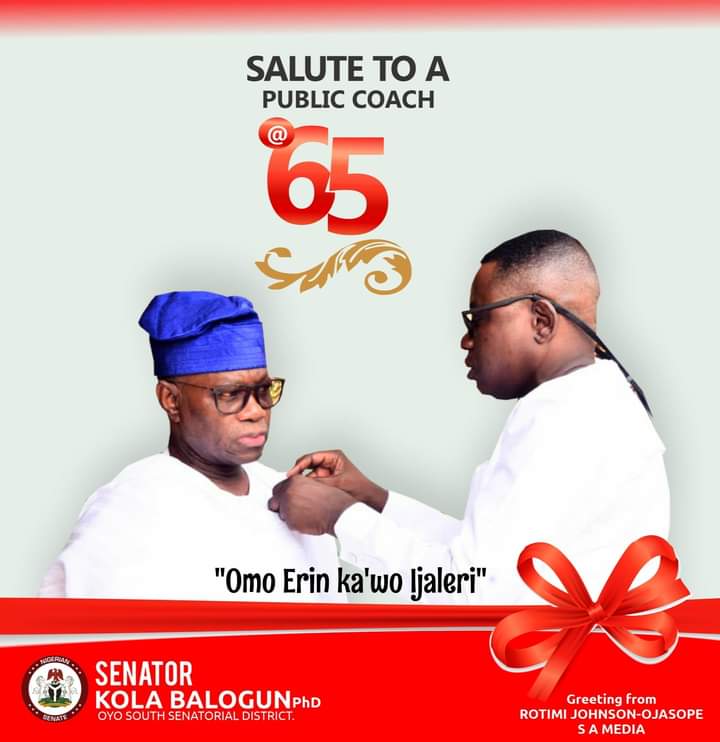 Senator Mohammed Ademola Kola Balogun was born on Friday 27th July, 1956 to the Aliiwo ruling family of Ibadan NorthEast in Oyo State. The Distinguished Senator Kola Balogun is the second Senator among his siblings as his elder brother (High Chief Moshood Olalekan Balogun) was a Senator in the 5th National Assembly. A day like this is a good one to itemise how God has been gracious and merciful to this Servant of God in public service, a namesake of a Prophet.

I like to describe a Coach as someone who impacts knowledge through practical demonstrations and activities. So Mohammed Kola Balogun has done enough to justify being referred to as public Coach. I have been in partisan politics for a while and I have the understanding of the good, the bad and the ugly because of how I have journeyed in the political terrain for over two decades. Senator Kola Balogun appeals to me as a servant of God, elected to serve God in the public sphere, not as clergyman. He has demonstrated this in the last two years and I think it’s noteworthy.
Grace progression because the grace keeps increasing; responsibilities are thrusted at him and he has consistently shown both capacity and competence in service. I don’t want to delve into how he became over national party executive about 30yrs ago but would look at governance and his sterling leadership qualities. I believe Nigerians deserve the kind of leaders they get but sometimes, by mercy, God makes few divinely orchestrated emergence of leaders happen. Mohammed Kola Balogun is a man that has learnt to submit to the will of God once he perceives that’s the flow of his Maker.

As Commissioner for Commerce and later for Works, Dr. Kola Balogun became the “go to” Commissioner in the then Governor Alao Akala’s administration. The surprising thing was the fact that he came on his elder brother’s nomination for the post and his dedication and loyalty to the Governor and the state soon distinguished him among his peers.
Interestingly, there are two Kola Baloguns in Oyo State politics and I never really knew who was who until this quintessential gentleman became the candidate of the PDP for Oyo South senatorial District around late October 2018 and I met this man for the first time in the first week of November. Like many party faithfuls, I felt it would be difficult to sell this former opposition party Governorship aspirant, so I requested for his profile. I was thrilled and felt the public most be aware of the prospect of getting him elected. Like how he became the Commissioner, he became elected despite all contrary permutations from oppositions and scheming from enemies within the party.

THE GIANTS’ KILLER: Just like in Psalms 136 that the Mercy of the Lord was ascribed to do all things, I can see how the Grace of God has availed for Mohammed Kola Balogun in his strides in public service. As a member of the campaign team, I knew of the constraints; financially, after journeying from APC to ADC as Governorship aspirant with all the heavy spending before landing in PDP, the limited human resources, because majority of the PDP members just reluctantly accepted him because he’s the Leader’s preferred candidate and the shortness of the time to the election. With these constraints, he had to contest against incumbent Senator and incumbent two terms governor, who was even a Senator in same district. So, you can’t blame those who never saw him as a major contender in the race.

However, the Grace of God worked against his opponents because they made more error of decisions and same grace worked for him as he kept doing the right things which produced quantum of positive results as we gravitate towards the elections.

As a purposeful servant of God, Kola Balogun knew and acknowledged the Grace of God all through the race. As a Christian, I know the spiritual import of acknowledging the hand of God and proclaiming same at every opportunity. At first, I became confused and concluded that it’s a political sloganeering because he was always swift to attribute any success to the Grace of God and when people called him Senator, he always (at all times, not most times) with “By the Grace of God”. I only needed to flow with the grace of God and see where it would land us. The Grace of God landed us at the National Assembly with an unprecedented victory with uncontestable margin. Yes, the grace of God also frustrated all the efforts of the main opposition party to manipulate the true outcome of the election, despite all the resources and machinations deplored to achieve same.

PROGRESSING IN SERVICE: If the grace of God brought you this far, it would take the grace of God to go farther; Kola Balogun knew this and never stepped outside the canopy of His grace. Very unlike many first term Senators, Kola Balogun capitalized on the grace of God in relating with his colleagues at the Red Chambers and within a short while, he found his voice among the veteran Federal lawmakers. Without mincing words or exaggerating, Senator Kola Balogun has become a great lobbyist at the national Assembly because when it comes to national and district matters, party divides are not sufficient to hold him back.

AMONG THE CONSTITUENTS: understandably, because he didn’t emerge from the popular channels of party structure as candidate and many felt they were denied of the opportunity to “task” him maximally; even after the victory, there were still reservations from the party members who were always complaining. These complains filtered to the constituents and many complained without any reasonable cause. We soon discovered the source and progression of the complaints and by the same grace of God, we were able to change the narratives, though the Covid 19 pandemic made us have a slow start. Now, it’s no longer “he has not done anything”, it has become “come and give us our portion too”. Personally as a PR man, I know this is a big progression because Nigerians don’t ask for “their portion too” unless they have evidence of others getting something.

According to the Iyaloja General of Oyo State and the Mother of the Oyo State Speaker, Chief Mrs Tina Ogundoyin: “No Senator has ever done so much for Ibarapa land like Senator Kola Balogun”. Ibarapa land has 3 of the 9 local governments in the Oyo South District. Expectedly, they always FEEL marginalized but by the grace of God, Distinguished Senator Kola Balogun has always maintained their lot and entrench fairness in his distribution of dividends of democracy.

Gracious in speeches, humble in conducts, firm in principles, humourous in interactions, impacting in service and posterity-focused in priorities; beyond reasonable doubts, though thorough breed with pedigree of royal birth and international experience, the Grace of God that brought him to office is still at work in helping him produce the desired results.
I hate to contest against the Grace of God and I wish to have the opportunity to ask Governor Seyi Makinde what informed his decision of Dr Kola Balogun as the candidate for Oyo South. Like I acknowledged at every available opportunity; working to make the election of Kola Balogun a reality was winning Engr Seyi Makinde’s election by 60% before his actual election because defeating the incumbent Governor and leader of the APC Governorship candidate was a task that must be accomplished for Omi Tuntun 2019 to become a reality.

This epitome of Grace is 65years today and still so youthful because even his stature and strength is another measure of Grace. Working with him can be so exhausting because once there is work to be done, no procrastinating, no resting. The good thing is that this same man of Grace also enjoys playing, his dexterity with words are legendary, his humours can spring up when least expected.

As a political Scientist with PhD, he has demonstrated beyond reasonable doubt that depth of academic knowledge in politics can also translate to exemplary Public service, where the heart is right and the grace of God is sufficient.