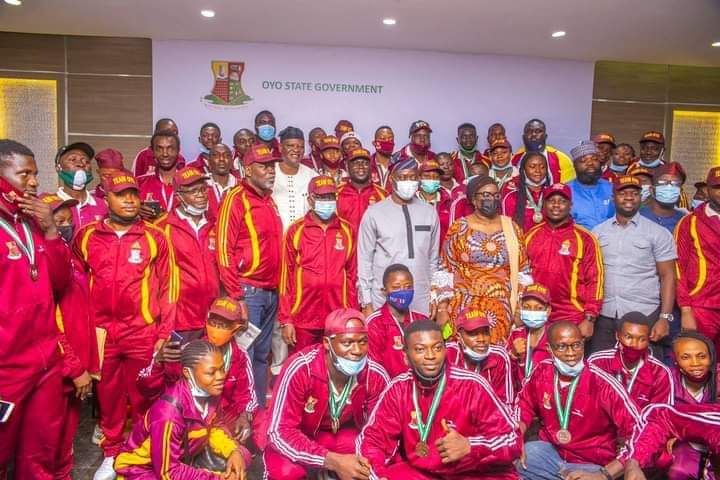 Oyo State Athletes who won medals at the Edo 2020 National Sports Festival will soon receive their cash rewards soon, as the Ministry of Youth and Sports has already received the Governor’s approval for the rewards meant for the medalists.

The Chief Press Secretary to Governor ‘Seyi Makinde, Mr. Taiwo Adisa, who made this known on Monday, added that the governor remains committed to the promises he made when he hosted the athletes shortly after the games.

According to the statement, each of the athletes concerned would soon receive the cash rewards as promised by the Governor.
“His Excellency, the Governor has already given necessary approvals for the release of the funds and the Ministry of Youth and Sports should be in possession of the cash in a short while,” the statement read.

Governor Makinde had, while hosting the athletes after the games, promised a cash reward of N500,000 for each gold medalist; N350,000 reward for silver medalists and N250,000 reward for each bronze medal.
He had also announced that the coaches would be rewarded with N500,000 each.

Adisa maintained that the athletes will be rewarded in a short while, urging those affected not to lose confidence in the administration, which he said has shown huge commitment to welfare of the athletes.
He said: “The Governor has approved the cash rewards for the medalists and coaches in the Oyo State contingent to the Edo 2020 Sports Festival.

“Once the Ministry of Youth and Sports completes the processing, the athletes will receive their rewards.
“His Excellency made it clear while hosting the athletes that they should rest assured that they would get their due rewards. The processes are almost completed and everyone will be duly rewarded.

“It will be recalled that His Excellency pointed out how he met a 2018 file containing the unfulfilled promises made by the immediate past administration to the State’s athletes and how his Government had immediately paid the athletes involved, even when it was an inherited promise.

“Some of the athletes might have expressed worries that the processes towards the release of the funds took a bit of time, but with Governor Makinde, who has proven himself over the time as a Governor who makes and keeps his promises, such worries should not be entertained.

“The athletes should rest assured that their rewards are close to being released by the Ministry. It’s no longer a matter of long wait.

“With the level of commitment shown to sports development by Governor Makinde, the promises cannot go unfulfilled. In no time, each athlete and coach will get their rewards.”