OPINION: Makinde Magic In Oyo And The Feedback From Alaafin || By Moses Alao ﻿ 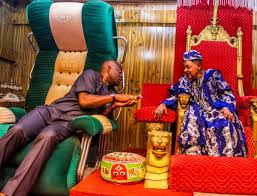 During the past week, His Imperial Majesty, Iku Baba Yeye, Oba Lamidi Olayiwola Adeyemi III, upturned the apple cart of the opposition politicians in Oyo State.

Kabiyesi lauded the efforts of the Oyo State Governor, His Excellency, ‘Seyi Makinde, in developing the state across different areas.

But, he specifically hit the opposition elements where it pained the most, singling out the areas of the policies of the Makinde administration in terms of worker-friendliness and prompt payment of salaries and pensions since he took office in May 2019.

This is one area where the All Progressives Congress (APC) has fought tooth and nail to brainwash the public and make them feel that the payment of salaries means nothing.

The party and its leaders do not miss an opportunity to deride Governor Makinde’s commitment to ensuring the payment of salaries and full pensions on the 25th of every month or earlier than that date when there are festivities.

The salary for July 2021 was paid on 16th of the month to ease the burden of workers and pensioners who may want to spend in preparation for Sallah.

Though all available records showed that the immediate past government of the APC failed woefully in terms of payment of salaries and pensions as and when due, while it also left behind a humongous arrears of gratuities, APC leaders always downplayed Makinde’s efforts in ensuring that workers and pensioners are happy.

But Kabiyesi Alaafin, a royal father renowned for his great intellectual acumen, his love for his people and one who does not engage in frivolities, rightly commended Makinde for making the same stone that APC leaders rejected for eight years, the chief corner stone.

According to Kabiyesi, the continued prompt payment of salaries by the Makinde government despite the economic recession and austerity situation in the country is laudable.

Kabiyesi, by this position, authenticated the Yoruba saying that what an elder sees crouching, if children climb Araba trees, they may not be able to see it. May the gods bless Iku Baba Yeye for seeing far and recognising a governor who loves his people, and may the opposition leaders who hate Makinde for doing the right thing in paying workers and pensioners receive their due rewards from the Almighty.

Baba Alaafin, like Governor Makinde, and, indeed, all well-meaning individuals who are not blinded by politics, know that the prompt payment of workers’ salaries goes beyond the workers and has great impact on the economy of a state or a country.

For the governor, the motivation to keep his promise to pay workers’ salaries and full pensions as and when due came from his realisation that the economy of the state will either thrive or suffer depending on the salary flow.

This became evident from the downward slide of the economy around 2017, when the state government under the late Senator Abiola Ajimobi owed workers’ salaries for months.

Today, Governor Makinde has been fulfilling that commitment, which is a product of his insightful study of the Oyo State economy as a governorship hopeful and the eventual production of a working document, the Oyo State Roadmap for Accelerated Development, 2019-2023, by reflating the economy of Oyo State with the payment of about N11 Billion monthly to state, local government workers and pensioners.

In addition to this, the Makinde administration has taken the bull by the horn to pay the huge debt of gratuities left by the immediate past APC administration, which once popularly described pensioners as dead people who should not seek to be paid their dues when the living are still owed salaries.

In all, the Makinde government has paid over N11 Billion in gratuities to retirees in the state civil service and the local government. That’s N11 Billion plus to those the APC government left for dead and ignored simply because they have served their state and retired meritoriously!

Interestingly, the economy of Oyo State has grown in leaps and bounds in two years under the Makinde government.

The Internally Generated Revenue, IGR, of the state grew astronomically from N1.6 Billion to over N3 Billion in two years, earning Oyo State the applause of the National Bureau of Statistics, which adjudged the Oyo State IGR as one of the fastest growing in the country. In the same vein, the state was ranked as the second Startup Ecosystem in the country, showing how the state is fast becoming an economic hub.

Could all these be because God is happy with Governor Makinde for fulfilling the Biblical dictate that workers must be paid their wages? Could it be because the gods also do not love a leader who cheats his people as the APC government did to pensioners and retirees for eight years? Baba Alaafin is Alase Ekeji Orisa, he would know better and this might be why Kabiyesi praised the governor over what leaders in Oyo APC knock him for.

One thing is clear, for Kabiyesi Alaafin to have commended the Makinde government for making life easier for the people, as he once did on the issue of security, it means that the good works being done by Governor Makinde are being recognised and would always speak for him.

Opposition elements can go to any length as they are already doing, to discredit the Makinde government and attempt to derail it by sponsoring attacks on the government, setting traps for the people of the state and creating false narratives on insecurity and other challenges; but  with elders like Baba Alaafin who see farther into the future beyond where the myopic eyes of desperate politicians can, the Makinde government remains assured that the people are behind it.

Equally, with feedbacks like the one from Kabiyesi, teeming members of the workforce and the citizenry, who are enjoying the humane policies and massive developmental efforts of the government across the education, health, infrastructure, agriculture and sport, Governor Makinde is invigorated to do more for the state.