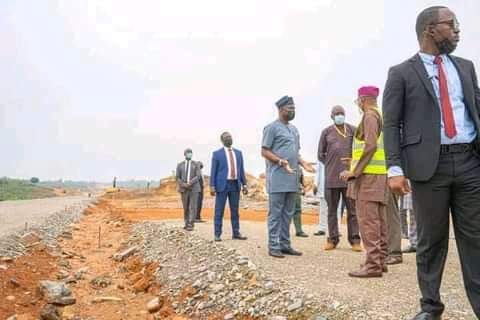 The criticism being raised against the SPV handling the ongoing road construction of the Ibadan circular road has once again exposed the crass ignorance deposited in the APC as an opposition party in Oyo State. It is not beyond common knowledge that the SPV is a child of necessity borne out of the fact that the company handling the project had to securitize their assets under this new company in order to complete the projects before them as and when due.

As much as I understand that an opposition party serves as a watchdog in a democracy, such must be done within the prism of logic. But the Oyo state APC members have been acting in the contrary by always exhibiting crass desperation for power by attempting fruitlessly to twist facts and events just for the purpose of painting a bad image of the Seyi Makinde-led government in the eyes of unsuspecting members of the public.

For the purpose of educating Seyi Makinde’s detractors who have delibrately blindfolded themselves with veils of hate and condemnation of what even a blind and deaf would readily say ‘God bless Governor Makinde.

The SPV is a conglomerate of companies taking part in the execution of a project. These companies are not strange in the business of such project, but the company handling the project had to improvise and come up with an idea of their volition in order to ensure that they beat the target time of execution of such project.

As against the narrative being peddled by APC members and its apologists in the State that the Governor had awarded the project to another company, the company handling the Ibadan Circular Project, SEL VYDRA Ltd. sought the support of some other companies that have been in operation for long to form Special Purpose Vehicle (SPV) to serve as risk management entity for the project at hand.

It is of public record that Governor Ajimobi as the face of APC in the State between 2011 and 2019, awarded 32km of this same circular road project to a company at about #70bn out of which 3km was done within 3 whole years.

Engr. Seyi Makinde as present Governor of the State awarded 110km (which is the entire 4 phases of the road project) to a new company at N138.2 billion, meanwhile, the company, out of their wisdom, formed a driving force which is the SPV in order to deliver the first phase of the project before the end of this administration.

So, bringing the Governor into the SPV debate is totally unthinkable and really worrisome as to how supposedly lettered persons would in the name of politics, use their expertise to manipulate, and deliberately attempt to mislead those who should benefit from their professional knowledge.

It is absolutely normal for companies to come together for the purpose of a particular project execution. In doing this, a new platform will be registered for such purpose, and, after the execution of such project, the newly consortium could be dismantled by them as they may so have agreed from inception of their coming together.

The existence of this consortium implies that bank will separate the loans from the other obligations it has with mortgage-backed securities. So, the SPV will allow the investors to receive monetary benefit before any other debtor or stakeholder of the company.

It is not farfetched by inference that APC in Oyo state is certainly running on one singular mandate as against the spirit of playing role of a watchdog as opposition, which is to run down the Seyi Makinde led government at all cost and by every possible means including deploying the instrumentality of blackmail, community disorganization, and insightful statements, all in a calculated ploy to erase the dark memories the APC administration imposed on innocent people of the state.

However, APC and it’s members in Oyo state should do Nigerians in the state a vital favour, that is to prevail on the federal government under APC’s control to face the real issues of governance and democracy instead of using taxpayers money to still gag and silence same taxpayers anytime the people raise eyebrows to it’s leadership failure because Nigeria belongs to Nigerians.

It is even more amusing when the Oyo APC members shamelessly parade themselves on sponsored radio programs, newspaper stories and even go as far as employing individuals some of which are even known to simply condemn whatever commendable efforts is being made by the present administration.

Some vital questions that keep recurring in the mind anytime Oyo APC members come out on their smear campaign are, are they isolated from enjoying like every residents, all the good works of the present Government? has anybody, Government inclusive, denied APC members opportunity to enjoy the now improved public facilities and infrastructures on account of being opposition? No!

Obviously, APC in Oyo should stop harassing the sensibility of Oyo residents because the dark memories between 2011–2019 is still very fresh even though the Seyi Makinde led government has helped us forget so soon through his human centered government, persistent resurfacing of these Oyo APC members only brings the fear of returning a free man back into jail, God forbid!.