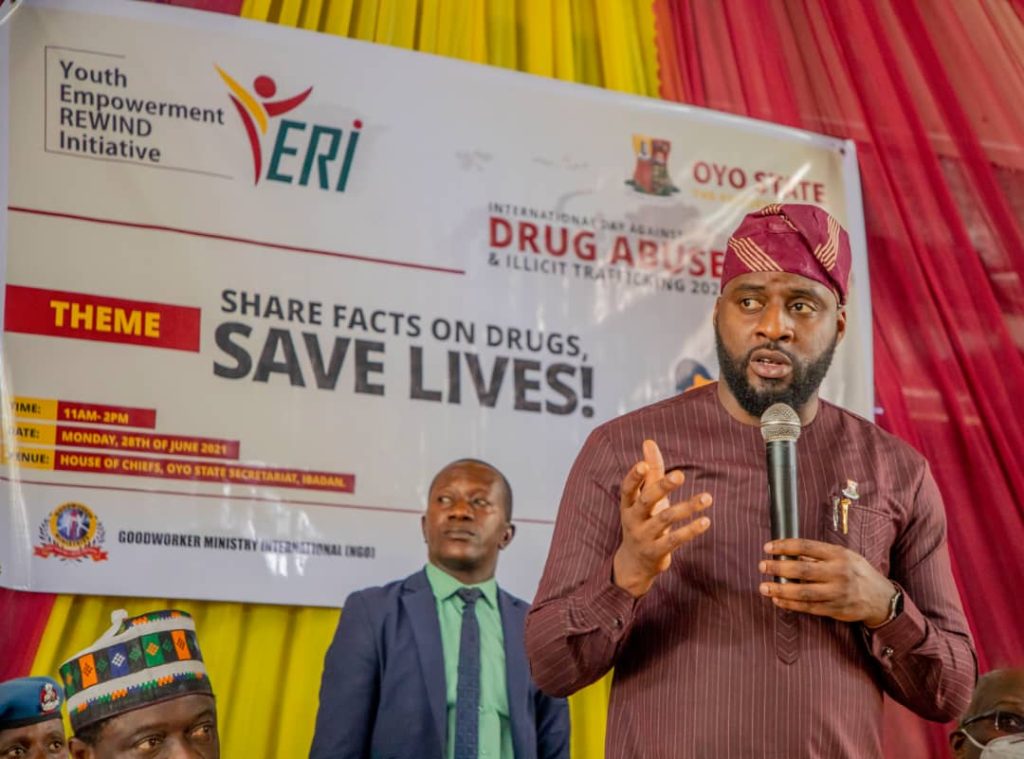 As the world marks the 2021 International Day Against Drug Abuse and Illicit Trafficking, the Speaker Oyo State House of Assembly, Rt. Hon. Adebo Ogundoyin has described effective control of drug abuse as a huge step towards ending kidnapping, banditry and other insecurity challenges facing the country.

Ogundoyin who spoke as the key note speaker at the symposium organized by the Oyo State Government to mark the 2021 International Day Against Drug Abuse and Illicit Trafficking lamented the continuous rise of Drug Abuse among youths, which has made it to become one of the most disturbing public health concerns in the country.

According to him, lot of crimes committed by the youths and even older suspects which are either under investigation at our Police Station or before the courts were committed under some drug abuse influence or the other.

He said, “Let me site the recently arrested 21year old student who is now a suspect in the police custody over the murder of a CEO in Lagos. She did not only confess to the crime, she also affirmed that the incident happened after she and the victim had taking some dangerous substances

“Imagine, what drug Abuse has cost maby families and even the society in general. I must confess that gang wars such as we continue to experience in our society, Cultism in higher institutions, banditry, kidnappings, armed robberies, terrorism , sex work, internet fraud and other organized crimes are on the increase because of the rise in abuse and trade of drugs and other dangerous stimulants among Nigerians.

“The Oyo State House of Assembly is using this medium to reassure all stakeholders of its readiness to partner and work with relevant Ministries, Departments and Agencies of Government as well as Private, Religious and Socio-Cultural organizations to put an end to drug abuse in the Society. We know drug is under the Exclusive Legislative List, but the 9th Oyo State House of Assembly under my watch has passed motions and resolutions on the urgent need to control the use and sales of illicit drugs among the populace.” The Speaker stressed.

“As a young person, I have heard a whole lot of these substances, most of these psychoactive drugs come with funny names like Skunks, Skushi, Arizona, skales and so on. Other latest substances taking by the youths include Lipton soaked in Regal gin, Dry pawpaw leaves, Hypo in Lacasera drink, Tom Tom in Lacasera drink,10 days Urine, Dry plantain leaves, Burnt tyres and Methylated spirit in Coke and the list seems endless.

“Unfortunately, females are not left out of this menace. Thus, Implementation of more punitive measures to discourage this habit may be necessary at this stage, while more intervention support and rehabilitation programs must be put in place for repentant abusers. It must be a continuous and sustained campaign and advocacy programmes in combating the scourge.

“I must appreciate the effort of my brother, the Special Assistant to the Governor on Community Relations, Hon. Olufemi Josiah for putting this together. It is our collective responsibility to ensure a healthy and saner society.
“Some say they take illicit drugs to relieve stress, tension and feel high. It is a lie. These substances are psychoactive drugs, they do more damage than good to the body and mind of the users. I am imploring the youths to stop their involvement in drug Abuse and related crimes and find something gainful to relax with like football, games and exercise,” he added.