Oyo Govt Presents Staff of Office To Olugunwa of Oke-Amu 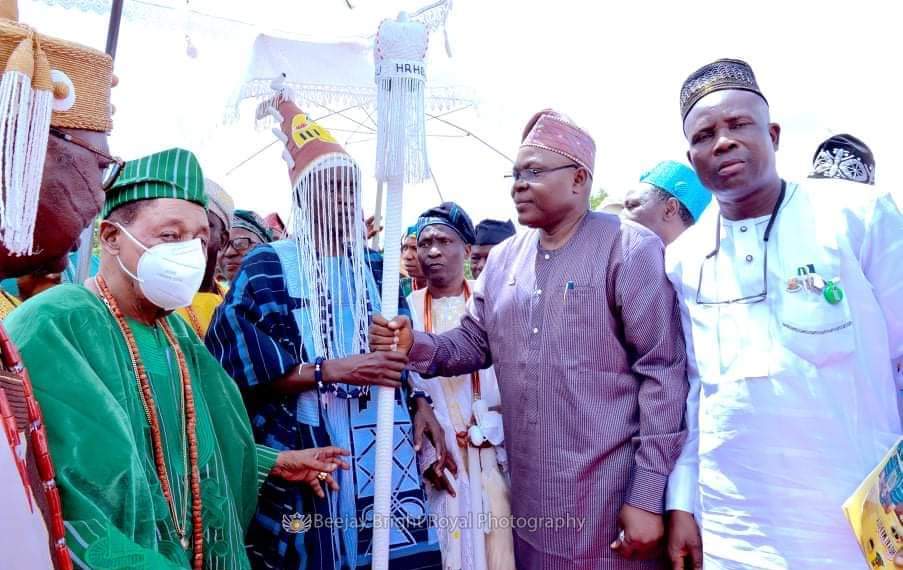 Oyo State Governor, Engr. Seyi Makinde, has presented the instrument of appointment and Staff of Office to the new Olugunwa of Oke-Amu, His Royal Majesty, Oba Omotosho Kasali Oyeniyi.

Performing the official presentation to the new monarch at L.A Primary School, Oke-Amu, in Itesiwaju Local Government Area, Makinde called on the traditional institution to partner his administration in ensuring better standard of living for the people.

He also said that his administration was passionate about security of lives and properties and carrying out meaningful programmes that would have direct impact on the people.
Represented by the Commissioner for Local Government and Chieftaincy Matters, Chief Bayo Lawal, the governor enjoined the new royal father to work harmoniously with his people to accelerate the rate of development in his domain.

The Commissioner in a Statement by his Media Aide, Adesoji Olusegun said all hands must be on deck to curb the lingering insecurity situation in the State.

Governor Makinde maintained that effort of Obas in ensuring security of lives and properties cannot be over emphasized, saying “you all need to work with other stakeholders such as government at all levels, Security Personnel, local hunters and others”.

He therefore called on traditional leaders across the State to also join the present administrations in its efforts to put an end to the challenges.

According to him, “the Traditional institution has gone a long way in history of playing significant roles in ensuring security of lives and properties of their citizenry. It is on this note that I wish to implore our kabiyesis to join hands with government of the day to stamp out the menace of insecurity facing the state at large, having in mind that government cannot do it alone”.

Presenting the Instrument of Office and Beaded crown, the Governor thanked the people of the community for demonstrating the spirit of oneness and sincerity of purpose by supporting the monarch.

In his Welcome address, the Chairman, Itesiwaju Local Government, Hon. Ojo Akintola, thanked Governor Makinde for making the event a reality, adding that the programme marked another milestone in the history of ancient town of Oke-Amu and the entire Itesiwaju LGA.

Earlier in his remarks, the Alaafin of Oyo, His Imperial Majesty, Oba Dr. Lamidi Olayiwola Adeyemi III, congratulated the Olugunwa of Oke-Amu and the entire Oke-Amu Community for the new feat.

He also urged the new king to be more committed to his traditional responsibility, which in turn will move the Oke-amu community forward.