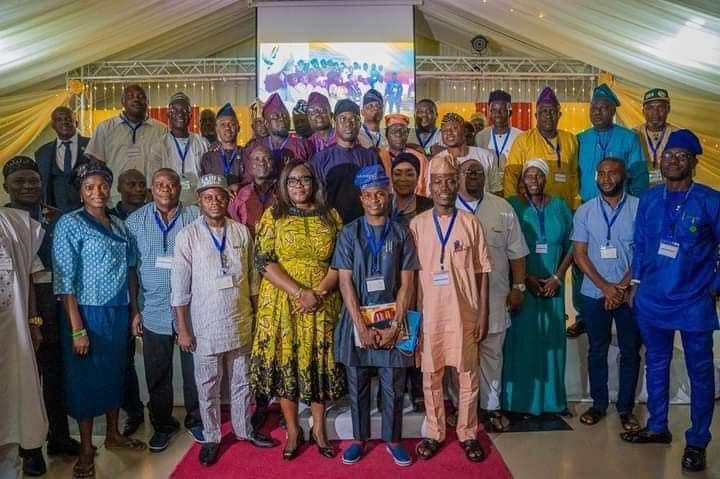 The Governor gave the admonition on Tuesday, at a 2-Day Retreat for local government Chairmen, Vice Chairmen and Heads of Local Government packaged by Fosterfield Consulting on behalf of the Ministry of Local Government and Chieftaincy Affairs and the Office of the Special Adviser on Strategy and Political Matters in Ibadan, the Oyo state capital.

Makinde also urged the council bosses to replicate the working policies of the state government at the local government levels adding that they should adopt the four pillars of the Seyi Makinde-led government namely Education, Health, Security and Economy Expansion and add to it if need be.

The Governor who admitted that some needs may be peculiar to some local government areas said the state government will match action with local environment needs.

While urging them to work in good relationships with their Heads of Local Government, he suggested areas like solid minerals, tourism and others as areas some local government can venture into adding that the state government will partner them.

His words: “I’m glad that we were able to organise this retreat. We tried it when some of you were interim chairmen and chairpersons but Covid-19 couldn’t allow us but we thank God that in Oyo state today, Covid-19 has taken bag seat. At least from the report I was given, there’s no anyone at the Isolation center at Olodo.

“This interaction is a good opportunity for me to come, for us to interact and for me to share one or two things with you. I’m sure alot of you are familiar with our Roadmap to accelerated development. We brought out the documents before the election last year. And I’m happy to tell you that the author of the document is here and that’s Prof Musibau Babatunde. We spent several days and weeks working that document together and it has served us as the blueprint for this administration. We are not going anywhere to ask for what we can do or what’s next after this because that document is a standard. And for this past to years, it has assisted us, so at the local government level. My wish for you is to adopt this four pillars. But some of you, there may be peculiarities in your local government, you can massage it and vary it a little bit, whoever wishes among you can make his/her pillars to be six. You can include two more pillars.

“For us, we will match action to the need that are peculiar to our local government areas. Expansion of economy utilising Agribusiness and infrastructure. Over these past two years, we have done quite a bit and we have the result. People are coming to us, Ambassadors, Heads of Mission wanting to support and assist us in Oyo state. Now for the next two years, we are getting stability in the Agribusiness area and also infrastructure. So we are taking Mineral development and we should also add tourism. So for those local government that are positioned to do things in Tourism and Solid minerals sectors, the state will support you and partner with you.

“One area we have been adjudged to have failed is security. Well, It’s a big challenge to us If we are being criticized in that area. Security actually strikes at the heart of every other things we want to do, expansion of economy, health, education. All of those will only happen in a safe and secure environment. So your coming in at a very challenging time. So you all have your work because we have to-do more for our people in the area of security, especially in Ibarapa axis and Oke Ogun. At the local government because I hold security council meeting every month. In all your various local government areas, it’s a must you do security council meeting one monthly as a minimum. But in local government where you have challenges, you can do it once every two weeks which means twice a month. Don’t be afraid and don’t be discouraged at all that you are just coming in and you are having these challenges before you. You are elected to solve problems and I pray and believe for majority of you, your current position will be a stepping stone to something higher politically but you have to work.
“So, some of the policies that we have that are working at the state level, I will say you should replicate it at the Local government level and where you need direction and support, please don’t be shy about it because if we get it right from the local government level, it will assist our overall position as a state. There’s a state security task force, you can replicate that at the local government level. Meet once in a week and review the activities. I can bet that by the time we are done branding our security architecture, they will copy it at the National level in this country. So you should step up to the table and ensure that at each of your local government areas, you take responsibility. Yes, security is our collective responsibility, government alone can’t do it but somebody will have to hold the rod of accountability. And because we are the elected representatives of the people we have to take responsibility for things that are well beyond your control.

“Amotekun are in your local government areas. Although, there are challenges to get them as agency to work with the federal institutions because there are rivalry but you will need to put all of them together. And the voluntry policing also, you know people in your local government areas. We are passing through a very difficult time security wise, so everybody must come together. From the report in Ibarapa, if there wasn’t the vigilantes and local hunters it would have been alot worse, they resisted. So we need to strengthen that network, but most importantly is the issue of intelligence. You also need to strengthen intelligence gathering in each of your local government. The security control room for number is 615. You should promote it and call it anytime. Elected officials at the local levels should take it upon themselves to ensure that every household knows it.”

Meanwhile, also speaking at the retreat, the Secretary to the State Government, Mrs Olubamiwo Adeosun, told the council bosses to count theirselves lucky because they have been blessed with a Governor who is in a hurry to develop the state and translate the development to the grassroots.

Adeosun urged the council bosses to design measures to depeen the development of the state government at the local government areas.

Her words: “Chairmen in Oyo State should count themselves lucky as they are blessed with a Governor who is in a hurry to develop the state and translate that development to the grassroots.

“As the ears and eyes of the Governor at the grassroots, you must design measures to deepen the development objectives of the state by expanding on the Four pillars of this administration, building infrastructures that target the economy, build health centres for peoples wellbeing, schools for educational advancement and better the lots of the farming populace by introducing agribusiness initiatives.”