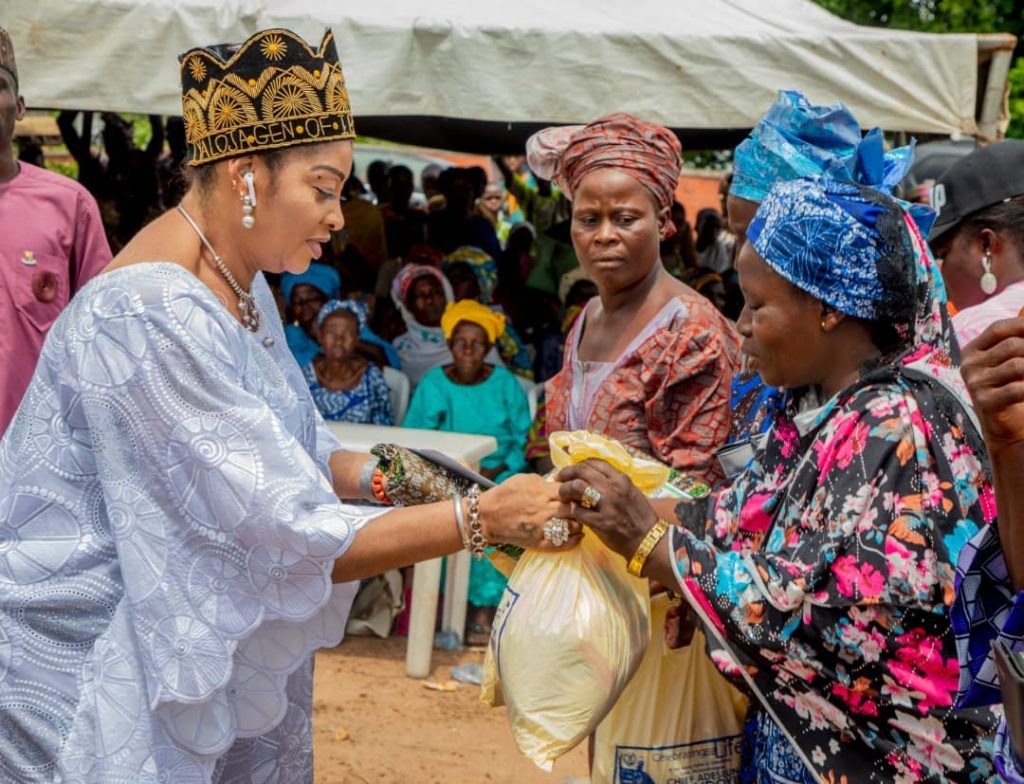 …….. Presents gifts to over 500 Widows, Women in honor of late Chief Adeseun Ogundoyin.

The wife of the Late Eruwa Business Mogul, Political and Community Leader and Philanthropist of high repute , Chief Adeseun Adetona Ayisa Ogundoyin, Chief Mrs Tina Ogundoyin has presented foodstuffs, clothes and cash to one thousand widows and women drawn from Eruwa and Lanlate in Ibarapa East Local Government as part of programs to commemorate the 30years remembrance of her late husband.

The program was held at the OriOke palatial mansion of the Late Chief Adeseun Ogundoyin in Eruwa.

The deceased who was the father of the Speaker, Oyo State House of Assembly, Hon Adebo Ogundoyin died on the 18th June , 1991.

Chief Mrs Ogundoyin said this year’s remembrance program was unique as it marked 30years of the death of a loving and caring husband and father hence she decided to make more people happy as was the practice of late Chief Adeseun Ogundoyin during his lifetime.

” It was just like yesterday. How time flies. 30years ago , the man of the people, the true son of Ibarapaland, a loving and caring husband and father passed away. I still miss my husband greatly. Though , I take solace in the fact that late Chief Adeseun Oguntona Ayisa Ogundoyin lived a fulfilled life and he is resting in the bosom of our Lord.

” We have not deviated from his idea and principle of my people first. We will always follow his footsteps of service to the people. This is why I decided to present gifts to over five hundred women and widows in Ibarapa East Local Government. My late husband was an easy going and accessible person who was ever ready to extend hands of love and fellowship to the people. This, we will continue to do to keep his memory alive and to uphold his legacy. ” Chief Tina Ogundoyin said

The wife, who is the Iyaloja of Ibarapaland assured the people that the family of Late Chief Ogundoyin will always make themselves available for the peace and development of the entire zone.

At a joint prayer session for the repose of the soul of the deceased, Rev. M.O Ayoola of First Baptist Church , Anko Eruwa and Alh Moshood Oladele, Anko Central Mosque, Eruwa urged the family and the entire people of Eruwa to live a life worthy of emulation.

The two Clerics described late Chief Adeseun Ogundoyin as a beacon of hope for the people during his sojourn on the mother earth.

The 30years remembrance programs also featured a visit to the tomb of Late Chief Adeseun Ogundoyin at Estate by his Children and family members including the Speaker, Oyo State House of Assembly, Hon Adebo Ogundoyin, his other siblings Adesoji, Adetoye and Aderemi Ogundoyin.

Recall that, at a separate program to commemorate the 30th anniversary of the death of late Chief Ogundoyin held at Eruwa Town Hall, the Speaker presented similar gifts to over one thousand widows, indigent and people with special needs.