PDP Governors Forum Meeting In Uyo, What They Discussed 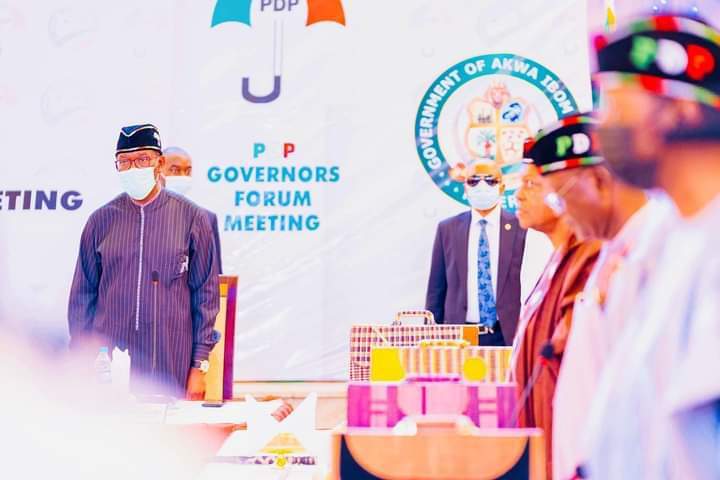 The PDP Governors’ Forum held a meeting on 14th June, 2021 at Uyo, Akwa Ibom State, where it once again reviewed the state of the nation. The meeting deliberated in particular on the deteriorating economic and security situation in the country, and worsening social and political tensions and issued the following Communique.

The meeting emphasised that under the Constitution, the NNPC is duty bound to make proceeds of sale or business of Petroleum available to the Federation Account which belongs to the three tiers of government, excluding reasonable and verified and verifiable cost of operations. The Federal government through NNPC is a manager of our oil wealth merely as A TRUSTEE for all Nigerians.

The meeting frowned at a situation where the NNPC decides in a totally discretionary and often whimsical manner, how much to spend, how to spend it and how much to remit to the Federation Account, contrary to the letters and even the spirit of the 1999 Constitution.

The meeting called for urgent steps to reverse these ugly trends in our practice of democracy, constitutionalism and Federalism.

The meeting observed that the CBN has become such an octopus that it threatens State governments publicly, without decorum, about sanctions on any attempt to question its MODUS OPERANDI. The CBN should take immediate steps to halt the depreciation of the Naira.

The meeting consequently requested Mr President to review the suspension of TWITTER operations in Nigeria in the national interest.

In any case, even though, Police is on the Exclusive List, the States, as a practical matter spend huge sums of money to support the security agencies to carry out their duties. The need for an appropriate legal framework to involve the States in policing has become even more urgent by the day. To this end we reiterate our call for the National Assembly to expedite action in passing the Electoral Act and Constitution amendments to ensure restructuring and decentralisation of governmental powers and functions.