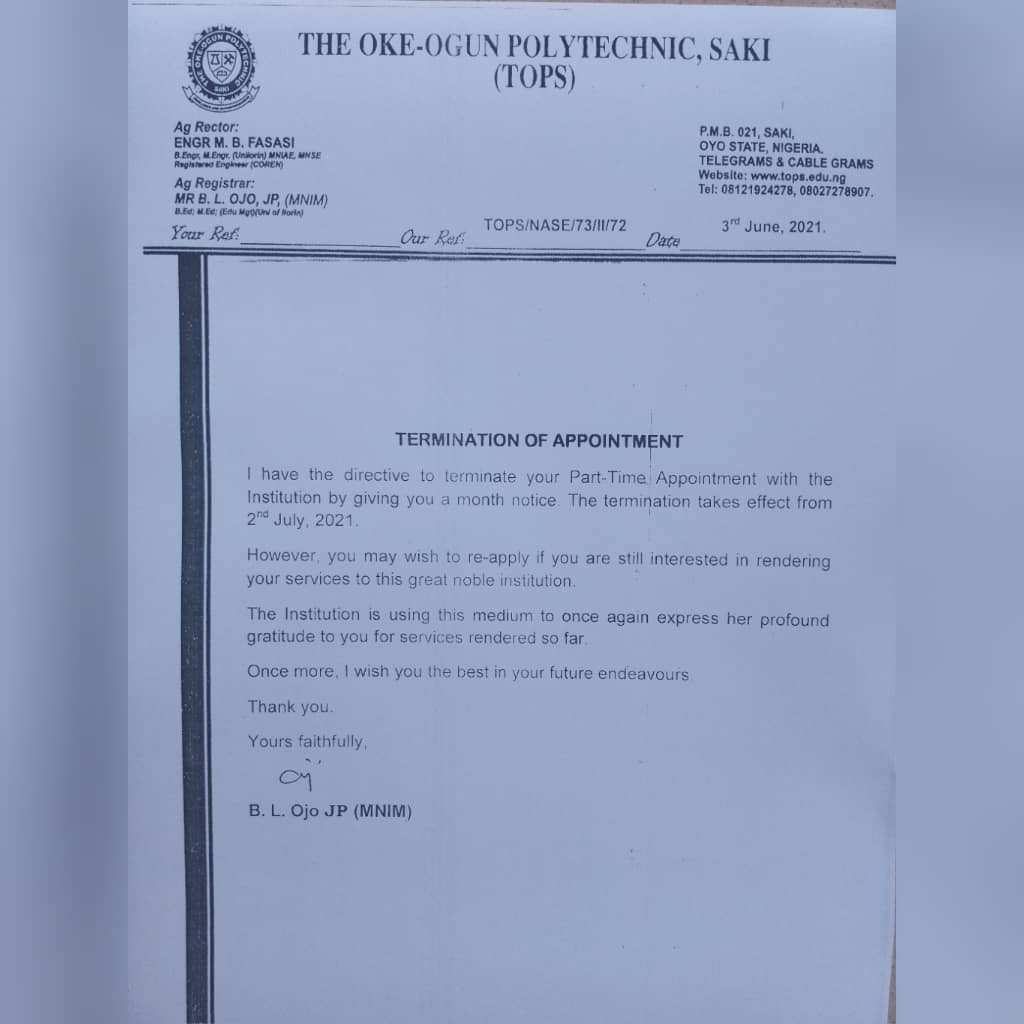 Since the commencement of present the Executive Governor of Oyo State, Engr Oluseyi Makinde’s administration, laudable developmental strides have been taken. The fortunes of the state have been growing; the image of the state has been positively impacted upon both home and abroad. All sectors in the state have felt and are still feeling the positive vibes brought by the present day government.

For instance, our dear Governor recently increased the monthly allowance of all corps members in the state to N15,000; he also embarked on mass recruitment of Nurse in Oyo State hospitals and Secondary schools across the state and he’s preparing to recruit for Primary schools; construction/rehabilitation of roads in the state; prompt payment of salaries and entitlements of retired workers, etc.

These and many more are the ways Engr Seyi Makinde has been putting smiles in the faces of the people in Oyo State.
Not minding the good works and reputation of the Governor, the management of The Oke-Ogun Polytechnic, Saki (TOPS) has decided to give him (the Governor) a bad reputation by terminating the appointment of 184 casual/part-time workers of the institution.

The letter is posted below:

The letter which read in part: “I have the directive to terminate your Part-Time Appointment with the institution by giving you a month notice.” On whose directive did Mr Ojo act? Government? Governing Council or Management of the institution? This remains a mystery because the government of Engr Seyi Makinde, that is giving hope to the people could not have given directive to terminate their appointments.

To further worsen the situation, the termination letter also states that: “However, you may wish to re-apply if you are still interested in rendering your services to this great noble institution.” Why lay them off in the first instance if you still want them to re-apply? Are there arrangements made for the years wasted? These casual/part-time staff have been helping in upholding the institution in that they have been used to man departments where there are no permanent staff on ground.

While institution like The Polytechnic, Ibadan has placed internal advertisement to take care of the interests of their casual staff, the callous acting management in TOPS can only think of termination of appointment. Mr Ojo B.L. who acted as APC collation officer in the last regime should not be allowed to tarnish the image the image of our dear Governor.

The Executive Governor is implored to look into this situation to prevent the school from further disintegration. Since this acting Management assumed office, the vehicle of the institution has been on reverse gear. A visit to the school will prove that instead of progressive and forward movement, it has been from one problem to another. Under this Management, there has been division, chaos and crisis of all sorts.

Now, they have laid off 184 staff for reasons best known to them. Why the hurry, when you know the substantive management will soon be put in place?
Your Excellency sir, you are appealed to wade in so as prevent the acting Management of TOPS under Engr Fasasi M.B. from giving your good administration a bad name, which it does not deserve. We also want the Visitor to investigate the clandestine motive behind this mass sack.
Thank you sir, people’s Governor.