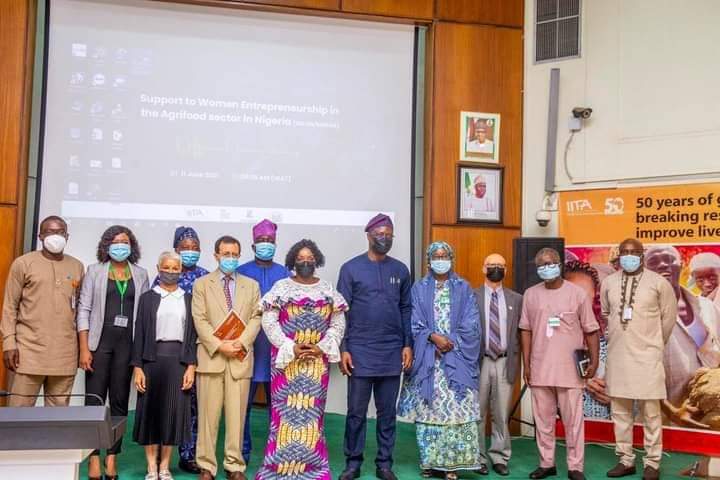 …’plan to complete 200km of access roads through RAAMP on course’

Oyo State Governor, ‘Seyi Makinde, on Friday, expressed happiness over the inclusion of 1,300 women in the state, who are to benefit from the Support to Women Entrepreneurship in the Agri-food sector in Nigeria (SEFAN/SWEAN) programme.

The governor, while speaking at the official launch of the training programme at IITA, Ibadan, stated that the relationship between Oyo State and the French Government always brings about development.

He equally appreciated the French Government for its part in the Rural Access and Agricultural Marketing Project (RAAMP), noting that the state has mapped out the roads that will get the interventions.

He maintained that the plan of the government is to complete 200km of access roads in Oyo State before the end of 2021 remained on course.
A statement by the Chief Press Secretary to the governor, Mr. Taiwo Adisa, quoted the governor as expressing delight at the selection of Oyo State women for the programme.
Makinde maintained that the relationship between the state and the French Government has been bringing about development, especially in the area of collaboration in the agriculture sector.

He said: “I want to formally extend a warm welcome to you, Your Excellency, Ambassador Jerome Pasquier. Welcome to Oyo State. You are no longer just a visitor to us here, you have become more of a friend.

“This is your fourth visit to us here in Oyo State since 2019, if I am not mistaken. And each time we have met, our meeting has always been followed by development. So, I must say this is the type of friendship and relationship that we favour.
“I remember in one of your visits, one of the requests that we had made was that you should look into investing in our human capital development.

“I am glad that you took that request to heart and we are seeing the result in the form of this Support to Women Entrepreneurship in the Agri-food sector in Nigeria (SEFAN/SWEAN) programme. “So, let me again say thank you for honouring us in this way.

“We are delighted that our women in Oyo State are among the 300 direct beneficiaries of this programme. You have indicated that there will be 1,000 indirect beneficiaries in the immediate and, if my math serves me right, your projection is that each of the women will influence 3-4 other women. So, the reality of interventions like these is that they have the potential of accomplishing even more than is projected.

“Historically, our women have been known to be very enterprising. They do not only farm but they also find markets for their produce. Some even go as far as merchandising, making the best use of the informal structures that they have been exposed to.

“So, with the training they will be receiving during this SEFAN/SWEAN programme, I have no doubts that they will excel even more.

“I am always of the opinion that when the right people are given the right opportunities, they thrive. And knowing the antecedents of the French Government I know that the women you have chosen must have been carefully selected and they will put in their best and be worthy ambassadors of Oyo State and Kaduna State.”
The governor asked for more interventions for the state, pledging that any investment made in the state will go directly to the people, just as he noted that the state government’s collaboration with the International Institute of Tropical Agriculture (IITA) on the Start Them Early Program (STEP has begun to yield positive results.

According to the governor, the programme has expanded the STEP to six more schools in all the zones in Oyo State, while the government has also decided to increase the number of beneficiary-schools to 12.

“Oyo State remains open for business and we will continue to play our part to see that every investment you choose to make in Oyo State yields the desired results,” Makinde added.
Earlier, the Commissioner for Agriculture and Rural Development, Hon. Jacob Ojemuyiwa, said Oyo and Kaduna States are the only two states selected for the SEFAN/SWEAN programme, which he described as a great opportunity for women.

He added that the training will go a long way to expand skills development of women agribusiness entrepreneurs in the two states.
He said: “Women are involved all along every value chain in Oyo State from farm to table, about 30 per cent in food production, 90 per cent in the processing of crops, livestock and fisheries, and up to 55 per cent in other business ventures.
“Training and supporting women have a far-reaching effect on the whole population. Women are known to be better managers of resources and they use their wisdom for multiplying the effect of any training given to them. Women are known to repay loans given to them one hundred percent.

“It is a great strategy by the French Ministry of Europe and Foreign Affairs in Nigeria for the development of agriculture in Nigeria.”
He assured the French Ambassador that the involvement of Oyo State women in the programme is a good decision that it will be proud of, saying: “wherever we are, we set the pace and this programme will not be an exception.”

The personalities at the launch include the wife of Oyo State governor, Mrs. Tamunominini Makinde; Secretary to the State Government, Mrs. Olubamiwo Adeosun; Chief of Staff to the Governor, Chief Oyebisi Ilaka and other government functionaries.