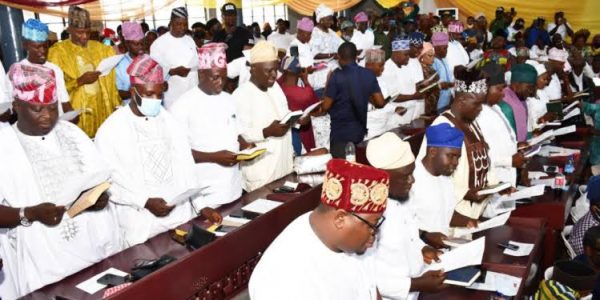 As a result of the recent killings in Igangan, Ibarapa area of Oyo State, an urgent security meeting was held, on Thursday, by all 11 Local Government chairmen in Ibadan at the Ibadan North East Local Government secretariat.

At the meeting, the chairmen agreed to synergise, work hand in hand among themselves, traditional rulers, baales, mogajis as well as other concerned stakeholders to secure property and lives of people in Ibadan.

Equally, the Chairmen advised residents to go about their daily activities without fear as all hands will be on deck to ensure safety of all residents.

Security of lives and property in Oyo state remains one of the cardinal pillars of the Engr. Seyi Makinde administration and a lot of investments have been heavily committed into the security apparatus in the state.

As part of the mandate given to the newly elected local government Chairmen in the state, it was imperative for the Chairmen in ibadan to meet on initiatives to deploy in complementing the state government’s effort in securing the state.

The group also agreed to urgently organise a security summit, which is expected to involve all stakeholders in the security sector soon.

The Chairmen, however, used the occasion to sympathise with the Chairman and the people of Ibarapa North for the unfortunate loss of lives and property in the recent attacks on Igangan community.

In addition, rhe Chairmen declared their unflinching, unwavering and total support for the Engr Seyi Makinde-led administration and his efforts at ensuring a secure and peaceful Oyo state.