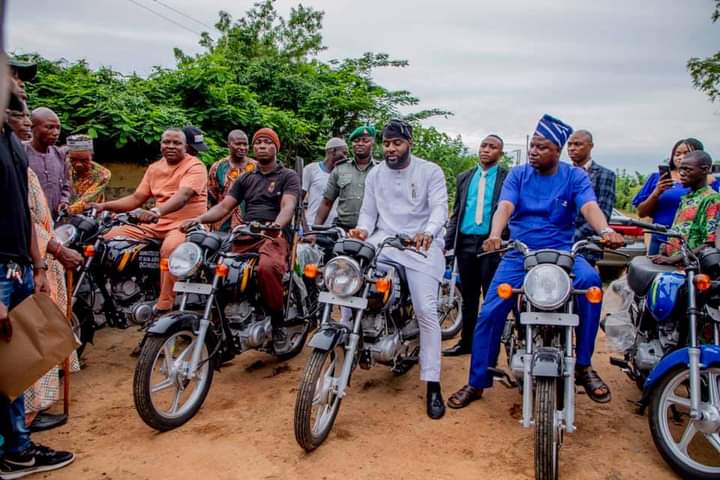 As part of his swift measure to end the unfortunate trend of insecurity in Ibarapaland, the Speaker Oyo State House of Assembly, Rt. Hon. Adebo Ogundoyin has donated fifteen new motorcycles to indigenous security outfits in Ibarapaland.

Ogundoyin who is representing Ibarapa East State Constituency had earlier promised to support every local and communally setup security structure, outfit or strategy during his urgent security meeting in the region after the Sunday bandits’ attack on the people of Igangan in Ibarapa North Local Government.

The attack which happened at the early hours of Sunday when residents of Igangan, Ibarapa North Local Government had retired to bed was allegedly masterminded by bandits and suspected criminal herders in which about 21 residents lost their lives, some injured and properties burnt including the palace of the Ashigangan of Igangan.

While presenting the motorcycles to community leaders and heads of local security bodies at the Divisional Police Headquarters in Eruwa, Ogundoyin said, “We are donating these motorcycles to improve the mobility of our indigenous security personnel- Amotekun, OPC, local Hunters, vigilance groups and enhance their operation as they continue to compliment the efforts of the Nigerian Police and other security agencies in securing lives, properties and our territories from bandits and criminals.

“A peaceful community cannot be overemphasized. If our societies are not secured, who will utilize the infrastructures that we are providing as government? Who will attend the free schools or even engage in their various economic activities and businesses.

“As these men of great courage volunteer to sacrifice their sleep, time, sweat and resources for the sake of our communities, we shall support them with all to make the task a reality in Ibarapa East, Central and North Local governments, and of course across Oyo State. With God on our side, We Shall Overcome the scourge of insecurity in our land” The Speaker stressed

In his words, the Area Commander, Eruwa Area Command, ACP Peter Ugochuckwu appreciated the Speaker for his gesture and support for the existing security structures for the safety of the people and the community.

While admonishing the people to always support the police with available and useful security information, he noted that the community will always experience peace and security when they work and support the activities of the police.

He said, “I want our people to know that police officers have no power to kill a suspect even when caught in the act. Lots of time people have accused us openly of collecting bribes and releasing suspects granted bail by the court.

“We will keep appealing to the community residents to come to us and ask questions when confused about how we go about our jobs, so that we can maintain mutual respect and cordial relationship. We are also grateful for this prompt gesture by the speaker, it is an evidence that he is passionate about the safety of his people.”

Also speaking, the Chairman, Eruwa Council of Elders, Chief Joseph Peluola expressed happiness over the Speaker’s concern and swift action to the need of the people.

He said, “The truth is I am highly impressed with your speedy response. We were suggesting seven bikes, then you promised ten on Sunday evening and today you donated fifteen. Thank you and God bless you.”