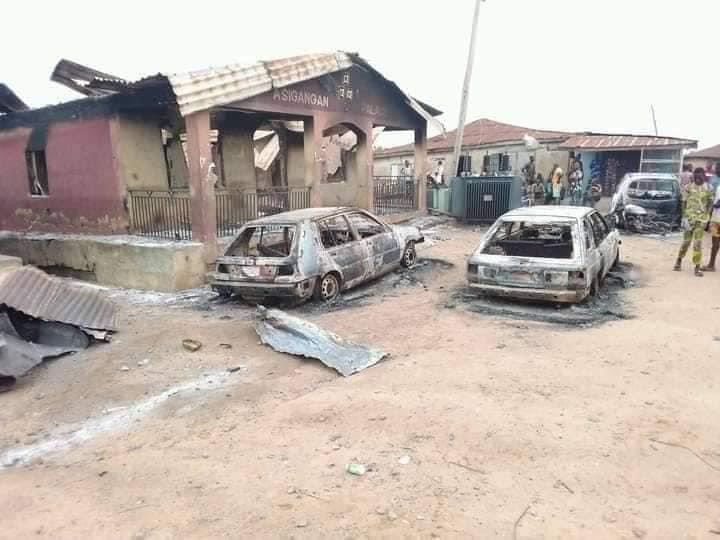 The recent reprisal attack in Igangan community after many of the same pattern of attacks in the past across the state which had led to the wasting of innocent lives and burning of property remained unresolved for the reason best known to those who know because a single arrest has not been made, talk less of finding out what was the reasons for this incessant attack on these harmless indigenes while the incidents of kidnappings and armed robbery keep increasing geometrically and each time we only fond of sympathizing with the families of the victims and nothing will be done to prevent another attack, kidnappings and robbery.

How do we continue to live in the fear of night attack, kidnappings and robbery? How do we sleep over the matter that the government had already accepted the blame for the failure to act as at when necessary. To the discerning minds, this is the time we must look around and inwardly to make use of the available methods which will be rooted from the problem we are facing as citizens.

The killing, kidnappings and others must stop, the perpetrators must be apprehended and brought to book. Then, how do we go about it? yes as a community we can do it, as a neighbour, we can jointly arrest the situation because the present insecurity has asked us to discover and set up our own security network to support government efforts.

We have vigilante groups in each of the towns and cities in Oyo state, we have Oodua People Congress OPC across the length and breath of this land and Amotekun, besides there are many individuals who are security experts like retired but not tired military and police officers and those who have spiritual and traditional powers to tame these perpetrators anywhere and any time.
Let bring these people out from each of our town or city and form what I call Neighborhood Watch Group, This group shall work within existing legal framework if there is one but if that is not possible, a new bill towards that must be quickly be proposed and the process of making it a law should be equally fastracked. This group will oversee the security of their territories and also provide supports to their neighboring towns if there is need Neighborhood Watch Group NWG is a multi-dimensional approach that implies a commitment to protect our town against external attack and at the same time helping neighbors to secure their domains. It will facilitate a security network between a community and its neighbors on safeguarding their environment, prevention and protection from guerilla attacks, kidnappings and armed robbery. It will also outline the roles that our neighbors are expected to play in case of emergency, on managing of intelligence gathering and control of our traditional security outfits like vigilante or OPC to counter any attacks.

It involves discovering the threat and, a situation that calls for a defense and a proactive attack, identifying the causes of any attack and design a tactic to foil any future occurrence.

It is a joint communities strategy that may be vary in operations depending on the peculiarities of each town and city in their own response to any security threat.

This is a problem oriented policing, it is a shift away from usual counter attack orientation or reactionary approach but rather a creatively response to the intelligence gathering or threat.

This group shall meet regularly to exchange ideas on crimes, kidnappings and armed robbery prevention with all the traditional rulers in each community and relevant stakeholders or people who always have first hand intelligent reports who may be regarded as advisory committee.

There should be neighborhood substations at every point of entry and exit of each community that would be carrying out a search on the people who come in and going out of the community and also capable of identifying local problem and threat in every nook and cranny of the state. In essence, random road block should be set up to check driver’s and passengers’ credentials.

While a traditional intensive enforcement tactics will also be used whereby this security team would be occasionally sent to conduct extensive “bush and forest sweep” to pursue the kidnappers, killer herdsmen and armed robbers from their hideout. We have traditional hunters especially in oke ogun and ibarapa that can draw the map of these bushes and forest around their communities perfectly. Those government reserve forests should not be left out, we will mandate our Senators or Representatives to get permission for the this security team to enter these reserve or forests from the relevant government’s bodies that managing the affairs of those forests in Abuja.

A team called Foot Patrol Officers FPO would be charged to be walking around to monitor the movements of the strangers on the street, market and even in beer parlor or club.
On the funding and procurement of ammunition, I am very glad to hear from our governor while addressing people of Igangan that government is ready to collaborate with the local government to take care of the funding of vigilante group, this is a very good step and we can equally extend this to all the local governments in the state, this is possible if it is not a political statement.

Aside that, a security trust fund should be established where all our political office holders, philanthropists, companies and business men and women will be made to contribute. Every body wants a secured environment to live and operate. We all know that businesses only thrive in a safe place, rich men and women know that they are the first targets of kidnappings and armed robbery, I know they will immediately key in to the contribution while our politicians and political office holders also aware that very soon, they will begin moving from one rural community to others for their campaigns, they will be much more interested in securing all those places they intended to visit.

The next task is to sincerely look for people of impeccable characters, people who are conscious of dangers inherent in mismanaging this fund to handle this aspect and its disbursement otherwise the whole efforts will be useless.

We would manage this security outfits in such a way that will not undermine the existing security network or government security agents, it will be arranged in a way that will give confidence to government agents to work freely with ours and have opportunity to come in contact with our personnel under non-stressful circumstances that will encourage them to exchange information and build mutual trust.