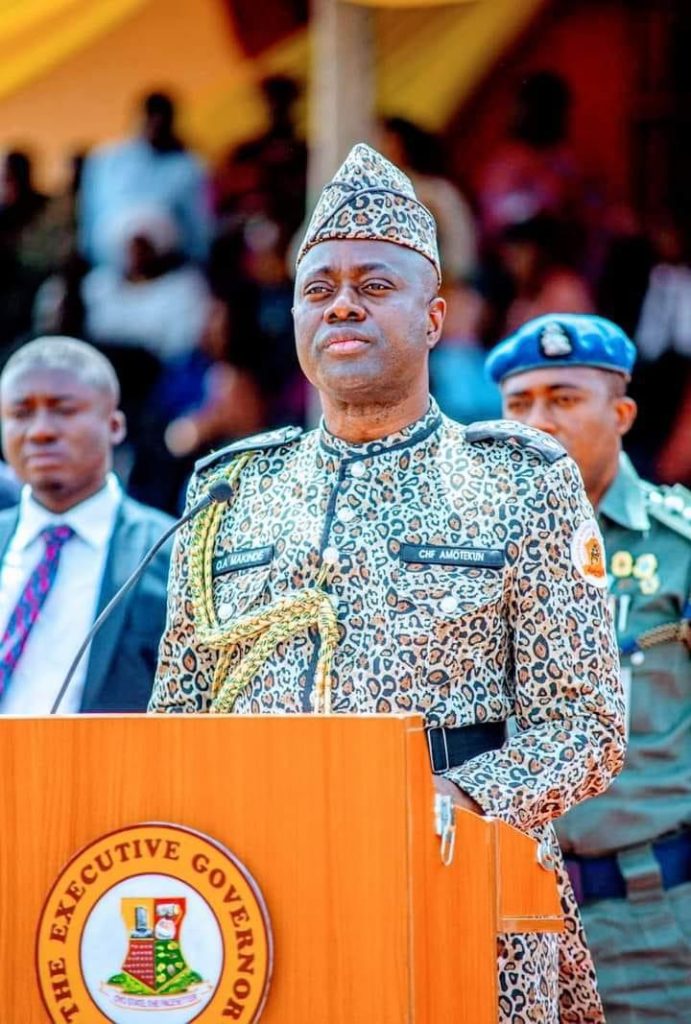 Governor Seyi Makinde of Oyo State has demanded the Federal Government to grant governors of the South-West the powers to equip their respective Amotekun operatives with sophisticated firearms like AK-47.

Speaking against the backdrop of the recent Igangan mayhem, Makinde decried that effective operations of Amotekun in tackling criminality continues to be limited because the operatives do not have sophisticated weapons to match that of criminal elements.

He made this call at Day One of the 2021 Governor Seyi Makinde National Democracy Summit themed: “The Future of Democracy in Nigeria,” held at the University of Ibadan on Wednesday.

Though he took responsibility for the Igangan incident and state of security in Oyo State, Makinde also demanded devolution of powers where state governors control their respective state security architecture.

He stressed that state governors will better address security challenges in their states if they are in charge of security personnel as against a situation where the head of federal agencies seek clearance before they act.

Makinde said: “Anyone who has been involved in security at any level will tell you that policing is local. One of the reasons why Amotekun is recording success is because members of the corps are drawn from the locality. “They know the terrain and can gather needed intelligence but also they can be held accountable by the local people because they know them.

“So when state governors become the actual Chief Security Officers in charge of the security personnel in their States, they can quickly respond to security challenges.

“For example, with what happened at Igangan, the people can hold me responsible for letting them down and when I go there, I will take responsibility because those killings were really needless.

“Even though I continue to take responsibility for the security situation in Oyo State, we all know that, in reality, the Commissioner of Police has to wait for orders from above before taking specific actions to benefit the local population.

“So, looking at the federal security agencies here in Oyo State, they have to get clearance from the federal.

“We will continue to do our best.

“Here in the South West, we were able to kickstart Amotekun. But even with Amotekun, people ask how the killings happened. Were they not there? But we have several limitations to what Amotekun can do and even the firearms they can carry.

“You have dane gun and you are faced with people carrying AK-47. If it is in terms of investment, if we are given the authority, I will also buy AK-47 for Amotekun if given the licence.”

Speaking further, Makinde harped on the imperativeness of restructuring, true federalism and giving more powers to federating units as the future of democracy in the country.

Noting that state governors are quick to put the blame for their failures at the doorstep of the Federal Government, Makinde said citizens can efficiently hold their governors responsible for development if they are truly independent-minded and allowed to develop and own their natural resources.

As against the proclaimed federalism, Makinde said the state was operating a unitary form of government and was in need of devolution of powers to the state from a concentrated centre.

Makinde added, “Our federalism exists only in name. Students of political history will tell you that what we have practised is a unitary system of government where more powers are concentrated in the central government.

“For true federalism to thrive, the federating units should have more powers and autonomy.

We have to devolve powers. The government, at the centre, serves as a coordinator of assets but does not wield as much power.

“With the devolution of powers, the state will have more fund to carry out projects. Also, the power dynamics will change.

“The states can be more independent-minded and choose how to develop their natural resources.

The state governor becomes an actual CEO and citizens can hold each governor responsible for development.

“The states can be more independent-minded and choose how to develop their natural resources. When the state governor becomes an actual Chief Executive Officer, citizens can hold each governor responsible for development.

Governor Rotimi Akeredolu of Ondo State, who is the Chairman of South West Governors’ Forum, was represented by the Commissioner for Justice and Attorney-General for the state, Charles Titiloye; while Governor Adegboyega Oyetola of Osun State, was represented by his Chief of Staff, Dr Charles Akinola.