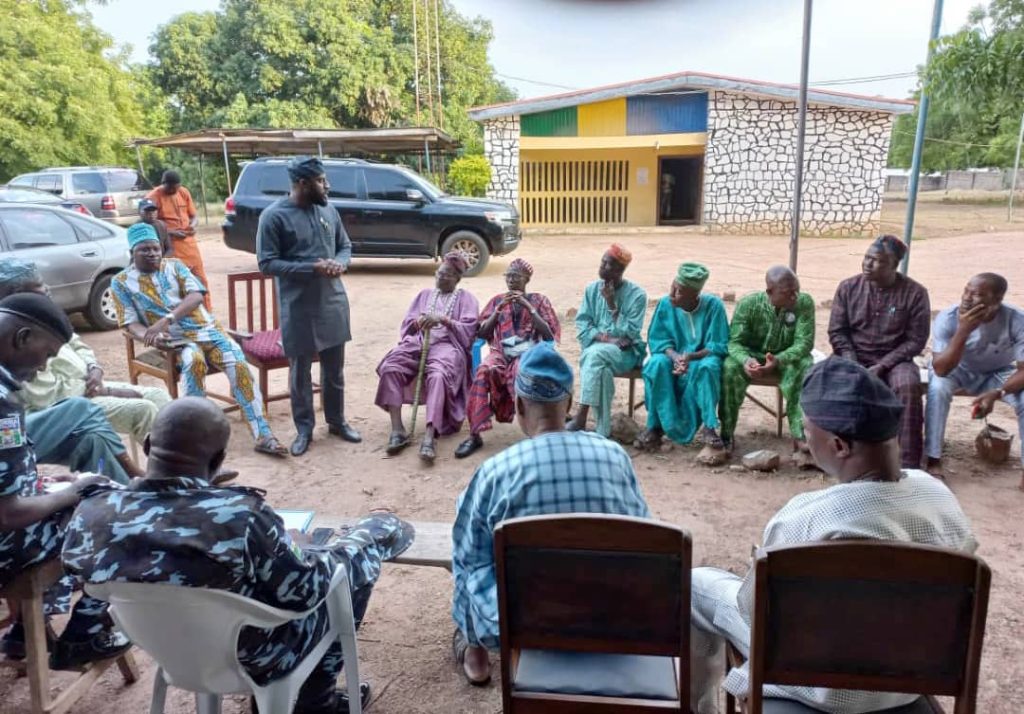 Following late Saturday’s attack on Igangan Community by suspected Fulani herders and bandits which led to the death of not less than twenty people and properties including a palace burnt, the Speaker, Oyo State House of Assembly, Hon Adebo Ogundoyin has held an urgent security meeting with elders , heads of security agencies and other stakeholders in Ibarapaland.

The meeting held at Ayete in Ibarapa North Local Government had in attendance the Police Area Commander, Ibarapa CSP Ojo Emmanuel, Political functionaries from the zone, Local Government Chairmen in the area, Community leaders and other stakeholders.

The Speaker said the meeting was meant to assess the situation, know the cause of the attack , put security operatives on red alert and put other urgent measures in place to forestall further attacks.

The Speaker said he rushed down to Ibarapaland because the unprovoked attack was hellish and the casualty and the level of destruction was inconceivable and monumental.

” There’s increased tension in Ibarapaland as we speak. This latest attack was yet another unprovoked assault. This is a well orchestrated attack on our people by blood sucking vampires whom we accommodated and who are now bent on sending us out of our fatherland. This is sad. We need to be more united than ever before to face this rampaging bandits and blood thirsty evils.

” Our zone is under siege to say the least. Our people were murdered in their sleep and their properties destroyed. Our traditional Institution has been desecrated by the suspected Fulani herders. Or how do we explain the burning down of the palace of the Asigangan of Igangan. This is odd and tormenting. ” The Speaker stressed

According to him, the meeting appealed to security agencies to comb to all the forest and identified hideouts of the criminals inorder to ensure that the perpetrators are apprehended and made to face the wrath of the law.

The Speaker said with this latest attack, special security arrangement must be put in place for the whole of Ibarapaland as the place seems to be the target of heinous crimes and attacks by evil doers.

” I think this is the time for me to again appeal to our God chosen Governor, Engr Seyi Makinde to help inaugurate a Security Trust Fund for Ibarapaland as it is obvious that the security operatives do not have the wherewithal to curtail these increasingly complex crimes in our zone. ” He said

The Area Commander, Ibarapa CSP Ojo Emmanuel assured that security has reinforced in the Igangan and its environs and appealed to residents to assist with useful information.