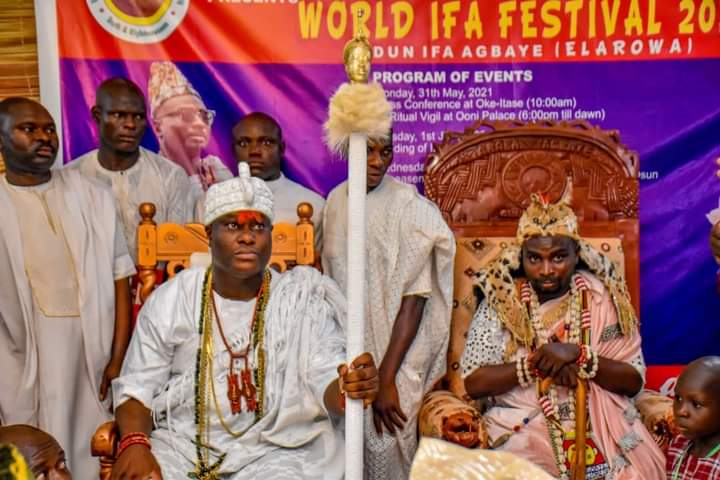 The Arole Oduduwa & Ooni of Ife, Ooni Adeyeye Enitan Ogunwusi Ojaja II, has warned politicians to desist from bad practices like lying, corruption and other vices that could ruin the country.

Ooni Ogunwusi who is the Co-chairman of the National Council of Traditional Rulers of Nigeria (NCTRN), sounded the warning at his Ile Oodua Palace on Sunday, during activities marking end of the 2021 World Ifa Festival.

The monarch who described Ifa as the voice of God, urged that its pronunciations must be followed while sacrifices must be offered to avert evils as prescribed by Orunmila.

“In 2019, Ifa said there would be a pandemic but the world paid little or no attention, tagging it as idol worshiping. But the Covid-19 came to prove it right, thank God that we were speared from the evil wave.

“Also last year, Ifa said there would be several agitations like we have across the country today, we have prayed and we shall keep praying.

“In the corpus named OseKaran, Ifa revealed that most of our challenges are the handiwork of desperate politicians. Ifa warned them sternly to desist from their evil ways or wait to face the wrath of Olodumare.

“Above all, Orunmila said there won’t be war and all challenges currently facing us as country would soon be a thing of the past and we shall emerge prosperous very soon.” The Ooni said.

Also, Ooni Ogunwusi called on all traditional rulers to sustain the promotion of the prestigious Yoruba culture and traditions through festivals and other ancient activities, towards the preservation of the heritage to generations yet unborn.

Earlier in his address, the Araba Agbaye, Chief Awodotun Owolabi Aworeni, thanked the Ooni for his immeasurable support, pledging the utmost loyalty of all Ifa worshippers to the Arole Oduduwa.