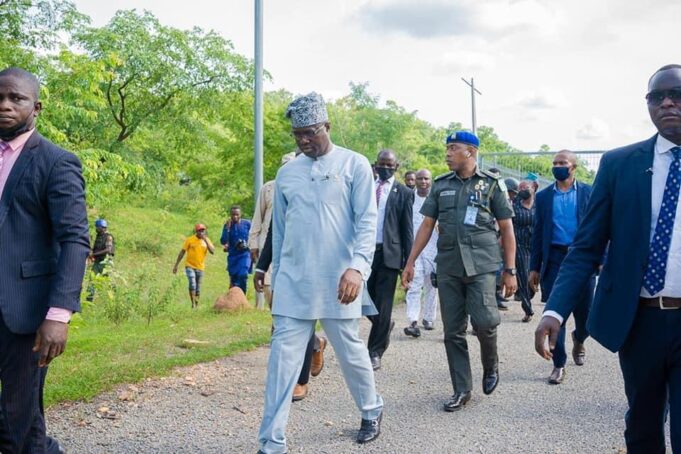 Governor ‘Seyi Makinde of Oyo State has said that he chose Agriculture as one of the areas of the state’s comparative advantage and competitive advantage to drive economic growth.

The governor made this known on Friday, at the official flag-off of the Agribusiness Industrial Hub at Fashola in Oyo.

According to him, his administration was determined to rebuild the state’s economy, on assumption of office, stressing that: “Our decision was based on the available data and a little bit of common sense. Oyo State has the arable land size and the climatic condition to support all types of agribusiness endeavors. We knew that if we signal to the investing community through our policies and policy implementation that we are open for business, they will come to us.”

“When we came into government, we were determined to rebuild the economy of Oyo State. We chose to use our areas of comparative advantage and competitive advantage to drive the growth and this is what dictated our choice of agribusiness as one of the drivers.”

“On our way here, I saw the old houses that were refurbished around 2009 or 2010, during former Governor Akala’s administration. From the available records to me, it was the Paris Club refund that was spent on the building and it was a lot of money in billions but it did not deliver the desired result.”

“The houses are there though little out of them were refurbished. Is there electricity? How about the road from Oyo to Iseyin? And who are the people that are living in the building today? No records. So, we set up and gave life to a new agency, the OYSADA, but we did not stop at that, we got a seasoned agribusiness professional, Dr Debo Akande, to run that agency.”

“Yesterday, we commissioned the Moniya-Iseyin road. We had thought the same contractor would just turn his equipment and face Oyo. They went through the process truly. We engaged the contractor and he gave us a bill of either N11bn or N13bn and I said no because we did 65km for about N9.9bn but this is about 35km or a maximum of 40km. I was expecting a figure around N8bn. So, in annoyance, I said they should throw it open and go and bid it.”

“They are still actually asking the original contractor to also bid and he now knows he has a competitor and I believe we will get the best value for that exercise. There is no way this place will yield the desired result without fixing this road from Oyo to Iseyin. We have gotten the approval from the FG to reconstruct the road and they said they will not refund the money to Oyo State but I said we will go ahead and spend Oyo State money but both of us; the state and the FG must keep the record of how much we are putting in to fix this road.”

“This flag-off of the construction of Fashola business industrial hub, which we are performing today is a testament to the fact that we made the right decision. It is proof that when we say Oyo State is ready for business, we are not just mouthing meaningless words, our doors are wide open. Come in and talk to us. Share your win-win ideas with us and we will collaborate with you.”

“For this project, we are working with Brains and Hammers. They are a Nigerian Real Estate company with proven capacity to execute projects at this scale. Fashola is just one of the nine farm settlements we have in Oyo State, which have been left moribund for years.”

“So, this ceremony speaks to another promise we have made to the people of the state that we will ensure that we will recover and extract value from all moribund government assets and abandoned projects. Quite frankly, we really do not care who started the project; maybe the colonialist or independent people or even the attempt by the 2009/2010 government.”

“Well, they have spent some money, our Paris fund, to renovate some of the buildings. The bottom line is we are here now to make this work; to put an end to the plague of abandoned and moribund projects littering our investment landscape in Oyo State. So, here at Fashola Agribusiness Industrial Hub, if you have had the opportunity to go around this land, you will found out it is such an ideal location for an agribusiness and agro-tourism hub.”

“The Brains and Hammers representative said they will deliver this place in November 2021. So, by November/December this year, we will come back to commission this project and this place would have been transformed into a thriving agribusiness industrial hub with ranching and grazing fields, crop production and processing facilities as well as a leisure and entertainment hub including a 9-hole golf course.”

“This place will be self-sufficient as it will include a fire station, mini-clinic, innovation hub, and residential estate. We have already contracted out the Eruwa and Akufo agribusiness industrial hubs. We have a major administrative and bureaucratic bottlenecks that delayed work out there but those are finally been cleared and I am sure we will start getting visuals of those works going on in those other places soon.”

“There are six others, which we also intend to convert into agribusiness industrial hubs. We also have several tourism sites that can be converted into tourism centres. So, this is another call to remind you that Oyo State is still open for business.”

“I will push that this road between Iseyin and Oyo will be flagged off within the next four to six weeks and we will fund it in such a way that it would be completed before our third year anniversary.”

Earlier in his remarks, the Executive Assistant on Agribusiness to the governor, Dr. Debo Akande, described the event as epoch-making, while he noted that the act of revamping the farm estates would redefine the development trajectory of the state, particularly on the economic, social and rural development

“We believe strongly that, by the grace of God, we will surely make this dream a reality, ” be said.