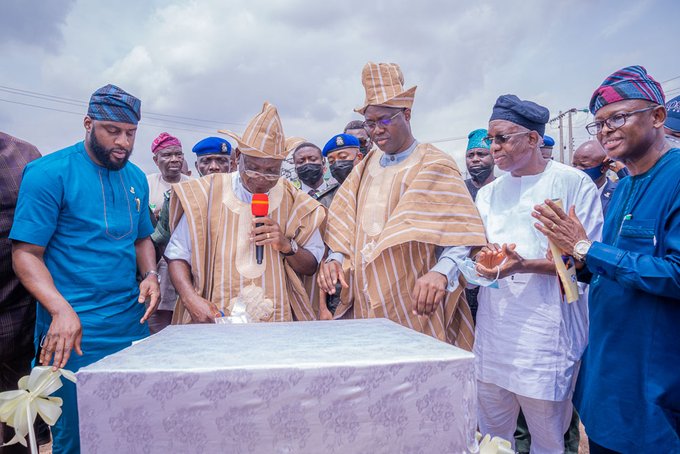 at the event, commended Makinde for delivering such a massive road project, among many others, despite economic challenges and other odds that have befallen the nation.

He congratulated Makinde for standimg firm with his people, saying Governor’s of the Peoples Democratic Party (PDP) are living up to expectations of the people.

The Benue governor equally lauded the people of the state for supporting Makinde, noting that evidence around have shown that while the All Progressives Congress (APC) has failed the leadership test across different spheres of life, PDP governors the are doing very well.

Ortom also charged the APC-led Federal Government to ensure security of lives and property and enhance justice in the land.

Governor Makinde, while speaking at the official commissioning ceremony held at the Akinyele Local Government Secretariat, Moniya, Ibadan, maintained that the Moniya-Ijaiye-Iseyin road will enhance the socio-economic development of the state and play a major role in engineering a modern Oyo State.

He added that the project aligns with his administration’s focus to lift the people of the state from poverty to prosperity, noting that the government has, in the last two years, embarked on reducing the infrastructure deficit in the state and building infrastructure that target the economy.

A statement by the Chief Press Secretary to the governor, Mr. Taiwo Adisa, indicated that the road was revoked and re-awarded by the Makinde government on November 5, 2019, after the contractor engaged by the previous government demonstrated lack of capacity.

It added that the fact that the road was completed in 18 months despite the challenges of COVID-19 pandemic and economic recession, which affected activities around the world, showed the administration’s commitment to keeping its promises.

While addressing those in attendance at the official commissioning of the road project, including the Olubadan of Ibadanland, Oba Saliu Adetunji and other notable traditional rulers, especially from the Oke Ogun zone of the state, Governor Makinde said that the delivery of the road project is another promise kept.

The governor added that the project is one of many projects that will play a major role in engineering “a modern Oyo State where the prosperity of the people through economic integration serves as the fulcrum of government’s decisions.”

He said: “First, let me appreciate my brother, Governor Samuel Ortom of Benue State for travelling down to be with us on this happy occasion. I want to use this opportunity to convey the deepest sympathies of myself, my family and the good people of Oyo State to you over the death of your Senior Special Assistant on Security, Christopher Dega. May God grant you and his friends and family the strength to bear the loss.

“I am sure I speak for myself, the people of Iseyin in particular and the good people of Oyo State when I say, we are delighted that you could be here today at the commissioning of the 65-kilometres Moniya-Ijaiye-Iseyin Road.

“This road remained in a deplorable state for several years. I remember that immediately after I became governor, I began to receive SOS messages regarding this road. I remember this particular request on social media from someone who said some parents have had to withdraw their children from school because of their inability to navigate this road to get to school.

“The state of this road also kept people away from going from Moniya to Iseyin. On a good day, they would spend three hours out here. You can then imagine what it would be like on a bad day when perhaps a truck has broken down at one of the terrible spots.

“Although a contract for the rehabilitation of this road was awarded by the previous administration, our initial inspection visits in 2019 revealed that the contractors had not even done 5 per cent of the work here before abandoning it. We therefore had to revoke and re-award the contract.

“I always say that whatever decisions we make at any point in this administration will be based on science, data and logic. So, we factored in that we wanted this road to be top grade and last at least 10 years before any rehabilitations.

“For this reason, we decided to increase the stubbing course from about 150mm to about 200mm, and we also changed the asphaltic wearing course from 40mm to 50mm. Looking at the initial design, we also realised that there was inadequate provision for drainage. So, we had to remedy that too.

“For us, this was flawed logic. We knew this would only amount to kicking the ball forward. In a year or so, we would be back to doing major rehabilitations.

“So, with all the available data, we decided that the more logical thing to do would be to increase the contract sum by about 2.9 billion Naira and deliver the quality of road that our people deserved.

“What we have done here is the total reconstruction of this 65km road at 9.9 billion Naira and this translates to 152 Million Naira per kilometre. So again, based on science, data and logic we made the best decision overall.”

The governor further stated that the economic significance of the road was well-known to the state government, hence the determination to complete it to time and specifications.

“Of course, we understood the economic significance of this road not only to individual residents but also to the growth of commerce and industry.

“The Moniya-Ijaiye-Iseyin Road is the link between Ibadan and Oke-Ogun, Oyo State’s food basket. “This road also hosts the once moribund Pacesetter Quarry and Asphalt Plant; not only have we resuscitated the plant, but it is already producing asphalt that we use in the building of our roads here in Oyo State.

“As we drive down this road, I am sure you will see the economic impact it has with the springing up of farm estates on both sides of the road.

“So, as we commission this road, let me again remind our people that we promised you economic development and prosperity through our Roadmap to Accelerated Development in Oyo State, 2019-2023. This is just another way that we are delivering on good governance. This is another promise kept,” Makinde said.

n his remarks, Governor Ortom expressed his joy at being given the opportunity to associate with Makinde on such a laudable project, hailing the governor for his achievements in the state.

He added that the PDP has been demonstrating good leadership as evident in its governors delivering laudable infrastructure projects, while challenging the APC, which he accused of having failed in every area, to step up to the plate.

“The PDP is working despite all the economic and security challenges. The PDP has demonstrated leadership and that is why we are commissioning this road today, which is amazing.

“I want to challenge the APC in this country, because they have failed. Economically, security-wise, they have failed. Socially and politically, the APC government is in deficit. Government is all about providing security for lives and property. Government is about providing infrastructure like the one we are doing here today.
“Let me, once again, call on the APC Federal Government to rise up and give leadership because our people are in pain. From North-East, North-West to North-Central to South-South, South-East and South-West, everyone is faced with security challenges and without security, there can be no meaningful development except in PDP-controlled state.

“In 2015, the mantle of leadership was given to APC. But from all indications, it is clear to every Nigerian that APC does not have the capacity to deliver. Go and check,
economically, how much was one dollar when APC came into government in 2015. “What was the nature of our security in this country when APC took over power? What was our social relationship in this country? Politically too, where are we? But let us work hard and by praying. As we pray, whether Muslims or Christians, let us also apply work because faith without work is death.

“So, let us work very hard so that come 2023, by the grace of God, we shall change the change,” the Benue governor said.

He equally commended Oyo State people for their resolve to continue to back Governor Makinde, saying: “I commend Oyo State people for giving Makinde the backing; for supporting him. As we were coming from the Government House down to this place, the members of the public generally were waiving in applause to our governor. Don’t ever contemplate leaving your people. Work with them, do what they want, share their pains, and also help them to give them leadership that will lead them out of their pains.

arlier, the Commissioner for Public Works, Infrastructure and Transport, Prof. Dahud Sangodoyin, said that the successful completion of the road has opened up the critical agriculture zone of the state for integration purpose and transportation of agricultural produce as well as further development of the local government areas around the axes.

“The major features of the road technically include the clearing, the artworks, the construction of rainfall concrete drain, 1 metre square access culvert, construction of cross culvert and other components including the underpass. The pavement is also made up of 200 metres thick laterite stone base, a 200metres stone base, 300m asphaltic concrete, binder course and 400m asphaltic wearing course.

“The overall width length of this road is about 10.3 metres. The successful completion of the road has opened up the critical agriculture zone of the state for integration purpose and transportation of agricultural produce as well as further development of the local government areas around these axes,” Sangodoyin said.