2Years In Office: Why I hate Seyi Makinde So Much— Olawale Aremu 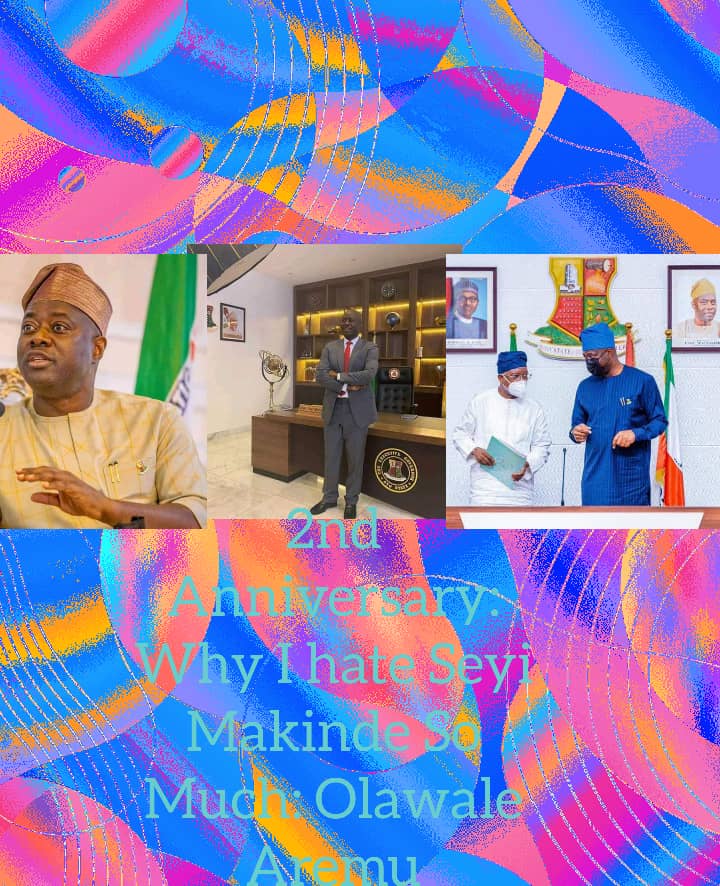 If this is who you really are, then the good people of Oyo State say they want you more but as for me, why always? You choose to give succour to every sphere of life in the pacesetter state……..why are you so bothered about the comfort of people, are you this kindhearted? I remember in one of your remarks on education which goes thus “We Do Ourselves A Favour By Giving Our Children The Legacy Of Sound Education” “Oga governor”, let me tell you that, this your magnanimity has made the out of school children reduced in the state with over forty thousand (40,000) students/pupils being enrolled in various public schools.

Let me say I’m not flustered by this your “oju-anu”; what about the compulsory free and sound education that you initiated, which has attracted even non-indigenes to enrol their wards in the state. Your own accelerated roadmap for development is on the threshold of surpassing that of Baba Awolowo. I hope you know that you are people-centred and folks say I should leave you to continue sharing the dividend of democracy.

Is it that you don’t know that some of the people benefiting from your good governance gestures didn’t vote for you and yet you didn’t revenge by getting back at them.

If this is what a governor is, then the market men/women, business operators and artisans never want one a term of office from you but a continuity, I am mad at their submissions about the aura of love they have for you. The premise of their argument resonates about the enabling environment created by your administration for the business to thrive.

Because I don’t like you, I provoked a further conversation about what they meant, and the response was that you are prompt in the payment of salaries of workers. I said and so what? What is the big in paying workers salaries, after all, it’s their legitimate right? I never knew you have infused your love so much in their veins that the enthused traders said they never had it this pleasant and beneficial in the couple of years.

Makinde, you made market people educate me of what I didn’t know about you. They claimed that you never treated retired government officials as slaves and deadwood as it was the mantra of the erstwhile administration. Tell me, is it true that you also pay their retirement benefits on or before the 25th of every month? If this is actually correct, you can’t expect me to like you, of course! To cap it all, the testimony flying around is that you employed five thousand (5,000), well-trained teachers, through a transparent system, devoid of favouritism and sectionalism, ” haha”, I enquired perhaps you want more babies and the people said it’s just to strengthen the educational system and restore the lost glory of the state.

No wonder in just two years of governance you elevated the ranking of the state in education from 26th to 11th with the hope of taking it to the top 3.

Your Excellency as you are being referred to, I see you just like a David, far from being a Goliath but I’m confused as to how a David like you could do what a Goliath cannot do! You are asking me what? Anyway, how did you manage to rescue the students, staff and the university community of LADOKE AKINTOLA UNIVERSITY from the shackles of joint ownership which had been a perennial issue?

I guess you share the same philosophy with
“I do not want the children of my drivers to be drivers to my children, neither do I want the children of my cooks to be cooks to my children, nevertheless I want free access to education for all”— OBAFEMI AWOLOWO. It does not stop at that, you ensured full accreditation of courses in the state-owned higher institutions of learning, wrongfully dismissed staff were reabsorbed, bursary supports to the law students, OYO-SUBEB with about 26 model schools, all of these, under 2nd anniversary in office, you commissioned Agribusiness project, START THEM EARLY PROGRAMME (STEP)-Oyo school projects, upgraded staff clinic in the state secretariat, procured nine ultra-modern buses to the civil servants, cancelled #3,000 school levies and internal examination fees, grants to primary and secondary schools, study packs (compendium) to secondary schools with free textbooks and notebooks to all schools and other giant strides.

Mr Governor Sir, is that the support you gave the people during the Covid-19 pandemic is not enough because I can see that you are interested so much in agriculture. I notice your actions in Eruwa and Akufo farm settlements. Is like your intent is about operation feed Oyo State with the farm produce from within.

I have an issue with you in the area of infrastructure. Why did you turn everywhere to a construction site? Hardly will someone go to any part of the state without seeing the touch of infrastructural development? You are just giving a facelift to every nook and cranny, Moniya-Iseyin road now motorable to a global standard, operation light-up Ibadan to avoid criminality, repair of the inner city roads by the Oyo State Road and Maintenance Agency(OYSROMA), General Gas flyover, Iwo-Road, Ojoo, Challenge terminals/motor parks, Ajia road network among other developmental agendas.

I say, this is too for me not to criticise you. Many people say, I’m being petty but I refuse to agree with them because I don’t like you.

Just this May 22nd, you conducted an election into the 33 local government areas in the state through the Oyo State Independent Electoral Commission (OYSIEC) and to my greatest surprise, you enjoined transparent, free, fair and credible poll with about 17 political parties contesting the same election without using your power to bully them. Anyway, I congratulate you because your party proved to be popular and loved by the people but again, tell me the secret and I promise to bury the hatchet.

Your Excellency Sir, permit me to explain the satire in the article as just a literary piece to appreciate your good work in the state and to felicitate your 2nd anniversary as the people’s governor. As a public affairs commentator, I want to implore you to do more, as you have written your name in gold with the hope that by the completion of your tenure, your successors would have a seemingly insurmountable feat to undertake.

You’re the best servant leader, and that makes people so glad!!!