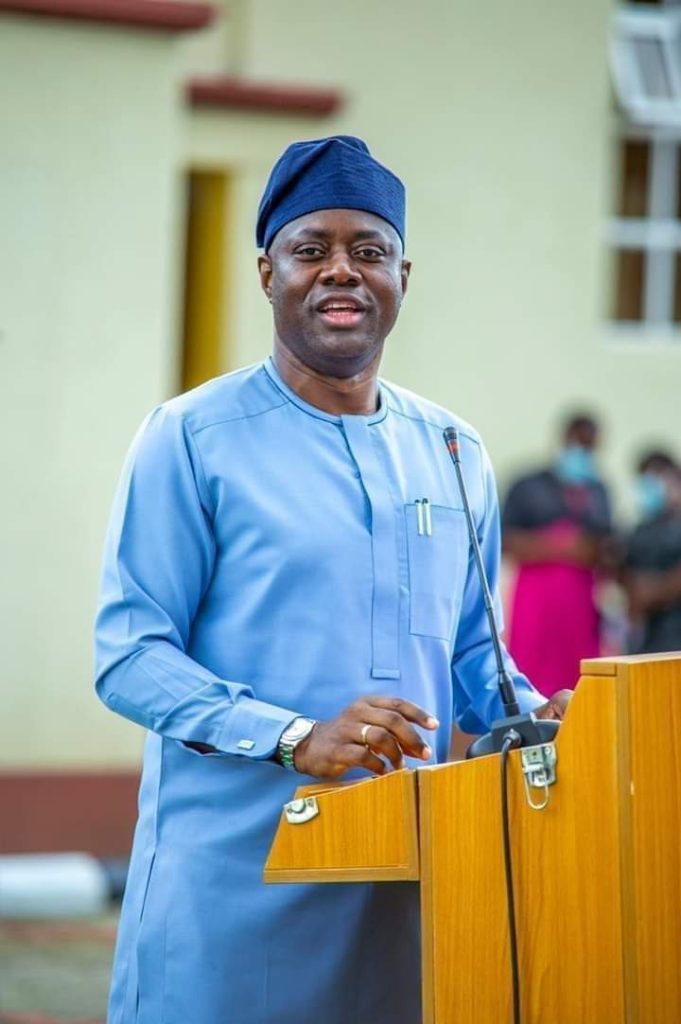 In a Press interview at his residence in Ibadan today, 27th of May said, he is so glad that a position opened up for His Excellency Gov Seyi Makinde and he has used it judiciously and made us proud. His dedication, enthusiasm and insight are really inspiring. His performance has silenced the opposition and pessimists in the state and he has been able to manage the affairs of the state excellently.
He always goes for the impossible thing to make it possible and he takes each target as his aim.

Hon. Waheed said further, he would like him to know that he is such a good example because he has shown us that being diligent and passionate to work is very important in achieving dreams. From the start of his administration, we were confident enough that he would perform excellently in Governing Oyo State compared with the last 8years wasted by administration of APC in the States.

No matter how big a crowd may be, a person like him always stands out! There’s no one who has worked as hard as he has in the past years. Now his efforts have paid off.

Part of these achievements are; Scrapping of #3,000 Education Levy imposes by the previous administration and replacing it with the release of Education Grant of #526m per term which amounts to #1.6bn annually, Allocation of 20% to the educational sector in the 2020 and 2021 budgets, Completion of 307 educational projects which includes the construction/renovation of classrooms, boreholes, toilets and solar power installation, Release of #200m to The Polytechnic, Ibadan for accreditation of courses, Recruitment of #5,000 teachers and 2,000 non-teaching staff by the Teaching Service Commission (TESCOM), Payment of #500,000 bursary to 120 Oyo State Students in the 2019/2020 Backlog Session of the Nigerian Law School, Payment of #500,000 bursary to 233 Oyo State Students in the Nigerian Law School for the 2020/2021 session, Commissioning of the improved Adeoyo State Hospital, Commissioning of the Oranyan Maternity Centre Rehabilitation Project on September 5, 2019, Ongoing renovation and construction of Model Primary Health Care Centres across the five Zones of the State, Relocation of Jericho Specialist Hospital, Jericho to newly constructed Maternal and Pediatric Hospital, Jericho, Full accreditation of the Oyo State College of Nursing and Midwifery, Procurement and distribution of 100 Automatic KIA vehicles for all security agencies in the State, Launching of 615 security code which has helped bridge communication gap between citizens and the government in emergency situations, Establishment of Police Mobile Force 72 Squadron and presentation of security trucks for its operation, Upgrade of Farm Settlements into Farm Estate under the Oyo State Agribusiness Development Agency, Payment of #350m counterpart Fund for RAAMP and declaration of State credit effected by the World Bank with 1,000 kilometers of rural roads to be constructed through the intervention to grant greater access to rural agricultural areas, Distribution of improved seedlings to 10,000 farmers as part of covid-19 palliative to guarantee food security in the State, Institution of the Youths in Agribusiness Initiative, Resuscitation of the Pacesetter Asphalt and Quarry Plant, Ijaye, which has been moribund for over 10years, Introduction of PPP initiative to revive moribund Agbowo Shopping Complex through concessionaire, Roll-out of #1bn SME/MSME Support Fund with Bank of Industry as part of the post-Covid-19 Economic Plan, Ongoing construction of four bus terminals in Iwo Road, Old Ife Road, Ojoo and Challenge, Ongoing construction of the Ajoda New Town Housing Project (360 units medium and low-cost houses), Ongoing construction of the Pacesetter-Wood Estates Project (11 units premium 5-bedroom terraces houses) at Bodija Estate, Ongoing construction of the Pacesetter-ProjectScope Estate Project (45 units premium 5-bedroom houses) at Bodija Estate, Ongoing construction of the Bodija Recreation Center, a multipurpose, self-sustaining sports and recreational facility established on Build, Operate and Transfer basis, Procurement of 106 Mass Transit Buses for transport development in the State, Resuscitation of the Pacesetter Fruit Juice Company, Oko, Release of over #5bn in two years to offset arrears of gratuities owed since 2012, Approval of promotion and promotion allowances to teachers from 2011 to 2016 as well as approval of 2017 to 2020 promotion for all workers, Construction of Moniya-Ijaye-Iseyin Road (65km), Ongoing construction of Apete-Awotan-Akufo Road (12km), Ongoing construction of Ajia-Airport Road with sour to Amuloko (21km), Rehabilitation of Challenge-Odo Ona Elewe-Apata Road (Sections I&II), Ongoing dualisation of Idi Ape-Basorun-Akobo-Odogbo Barracks junction (7.252km), Expansion of Oke Adu Junction-Agodi Gate-Idi Ape Road Interchange (3.26km), Ongoing expansion of Agodi Gate-Old Ife Road-Airport-Adegbayi (8.2km), Dualisation of Saki Township Road (9.7km), Ongoing reconstruction of Ibadan (Eleyele Junction)-Akufo Junction-Ido Eruwa Road, Section I (10km), Akufo Junction-Ido Eruwa, Section II (48km), Reconstruction of Under-G-Stadium-LAUTECH Gate Road (3km), Akingbile-Lagbeja-Ajibode Road (3km), Rehabilitation of Saki-Igboho Road (44.7km), Ongoing Challenge-Felele Junction Improvement Works, Construction of Awotan Landfill and Renewable Energy Project to provide, Renewable energy up to 15MW, Clean and green initiative for waste to wealth project, The provision of 3 standard football pitches in 3 secondary schools, The design of a befitting, quality website for 3SC, approval of financial reward for the Oyo State contingents to the 19th National Sports’ Festival held in Abuja in 2018, The payment of all outstanding allowances from 2016 to 2019 to the State’s Basket Ball Team, Approval of financial reward for the Oyo State contingents to the 20th National Sports’ Festival held in Edo #Edo2020, Remodelling of the Lekan Salami Sports Complex, Adamasingba, Remodelling of Olubadan Stadium, Iyaganku, Ibadan, Remodelling of Durbar Stadium, Oyo, Remodelling of Soun Township Stadium, Ogbomoso, Construction of Ebedi Township Stadium, Iseyin, Construction of Saki Township Stadium, Saki, Construction of Igboora Stadium Complex, Igboora.

Hon. Waheed charge the people of the state to always pray and support Governor Engineer Oluseyi Makinde positively for more achievements because some have been given the opportunity like this, while they ended up with nothing, not only that, but also drained Oyo State treasury. He prays that he shall achieve more successes in the coming days and years.