Aregesola @64: “A Bold Thinker, An Epitome Of Interpersonal Harmony”, Says Alaafin Of Oyo 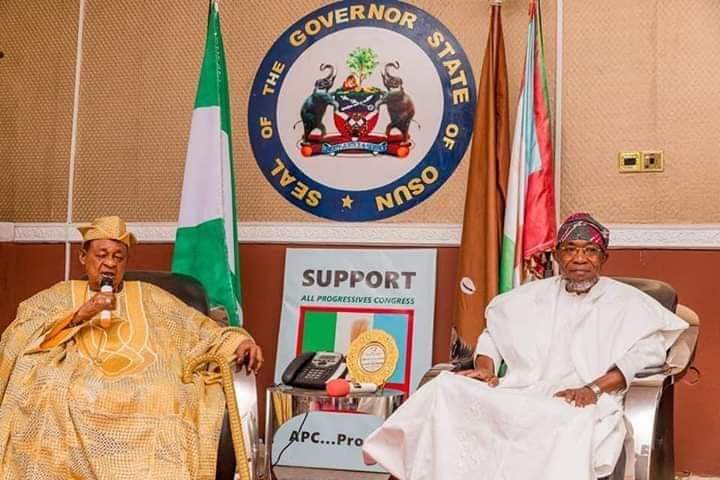 The Alaafin of Oyo, Oba ( Dr.) Lamidi Olayiwola Adeyemi 111, has described the Minister of Interior, Rauf Aregesola, as a man with high standards, and one driven, competitive, and have value hitting his goals above all else.

In a congratulatory message made available to heritageecho.com, issued by His Director of Media and Publicity, Bode Durojaiye, to commemorate the 63rd birthday of the Minister, Oba Adeyemi said ” Aregesola is a bold thinker, and unafraid of taking the road less travelled (even when others struggle or feel anxious).

He said Aregbedola is hard-driving and often enjoy smashing through obstacles, adding that working with Aregbesola offers the potential for exceptional intellectual growth.

Oba Adeyemi noted that as a steward, the Minister is dependable, loyal, helpful, and also provide a stabilizing and calming force for any establishment he finds himself.

The Paramount Ruler recalled that as a former Governor of Osun State, Aregbesola exhibited “an epitome of interpersonal harmony, the social glue and affiliative force that keeps groups together. Hence my decision to bestowe upon him the title of “Omoluabi of Yoruband” .

He explained that he had monitored the administrative and leadership style of the governor since inception of his administration, saying Mr. Aregbesola led along the line of a true “Omoluabi”.

“The Yorubas are a tribe that always instill in their children and the youths all the characters of a responsible and well brought up individual, I have studied the leadership style of Aregbesola and discovered that he is the only one whom have through his leadership style projected the “Omoluabi ethos” of the Youruba race.”

“Aregbesola is man that breathes responsibility at all times, we have always been hearing of an Omoluabi for a long time and am so happy that we now have a former Governor and the Minister who is leading by example.”

According to him, “Aregbesola is kind, social, giving, and typically build deep personal bonds with the people . He ( Rauf Aregbedola) is often known for being able to resolve conflicts peacefully (and for avoiding conflicts in the first place)”.

Alaafin furher asserted that working with Rauf Aregbesola “is often more fun and social than working for other leaders”.

“This is because Rauf Aregbesola puts less emphasis on challenging his employees, and focusing instead on putting their people in positions that leverage their strengths in order to achieve success. He works to avoid having people feel uncomfortable or anxious. He is a dynamic leader”.

While rejoicing with Aregbesola on his birthday, Alaafin prayed God to grant the Minister long life and good health in the good service to
his fatherland.
“My dear Aregbeeola, wshing you a day filled with happiness and a year filled with joy. Have a wonderful time and a very happy birthday.

“On your birthday I wish for you that whatever you want most in life it comes to you just the way you imagined it or better. Wishing you a beautiful day with good health and happiness forever. t’s a smile from me… To wish you a day that brings the same kind of happiness and joy that you always bring to me. I may not be by your side celebrating your special day with you, but I want you to know that I’m thinking of you and wishing you a wonderful birthday. I wish for all of your wishes to come true. Happy birthday!”