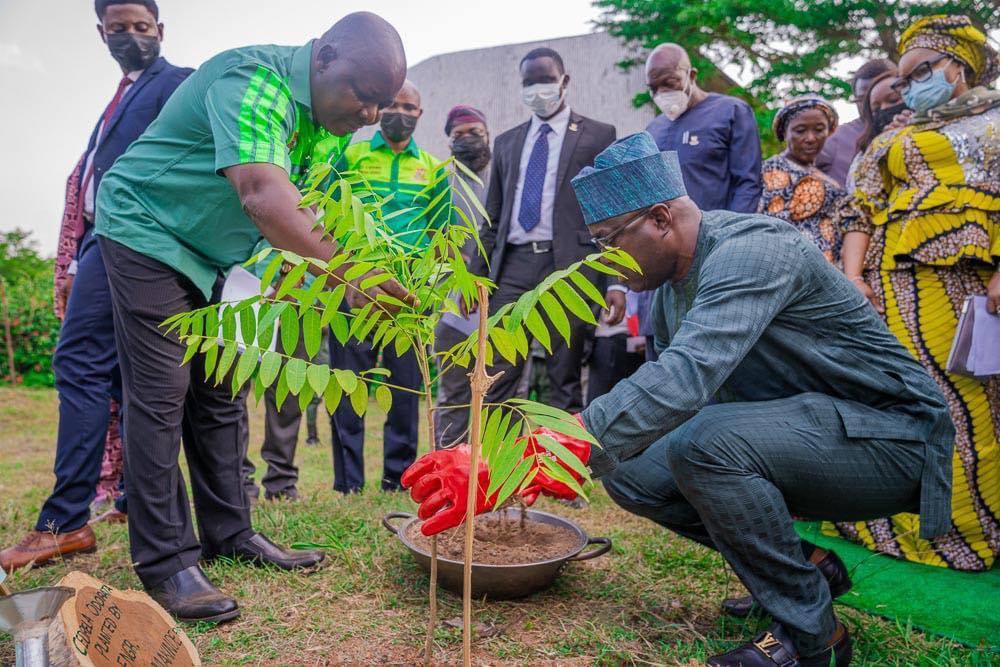 The governor, while launching the campaign at the frontage of the Head of Service building, Secretariat, Ibadan, said that if planting of trees is well-promoted, it will have an impact on the kind of environment that will be handed over to the upcoming generation.

He maintained that his administration is set to plant 500,000 trees within the 24 months remaining in its first tenure.

A statement by the Chief Press Secretary to the governor, Mr. Taiwo Adisa, quoted the governor as saying that consistent tree planting will positively affect the quality of life.

He said: “It is my pleasure to launch the tree planting campaign in Oyo State as part of the activities marking our second year in office.

“We are very close to the Premier Hotel, I think it is right behind us. We have UCH close to us and the road that takes you to the top of the Hill out there. I grew up less than two kilometres from this place, in Yemetu, Adeoyo, Isale Alfa axis and I remember that in those days, you had a colony of the bat coming from that area, including Igbo Agala.

“We sit down in the evenings and you see them doing their migration. If you woke up very early in the morning, you would see them returning to the forest reserve out there, but we have lost all of that now.

“When you give a contract to people or you sign a deal with them and say, look, we want to make an Estate here, the first thing they do is to clear everything including the vegetation. “So, we now have a situation whereby the weather system is unpredictable. Sometimes, when we think we should have fairly decent cool weather, it could be hot. It is an indication of how we have mismanaged our environment.

“Unfortunately, all of us here and even the people in the heart of the city, we share the environment. It does not know a big man or a small person. So, this effort is not elitist at all. It is an effort that, if well-promoted, will definitely have an impact on the kind of environment we are going to hand over to the upcoming generation.

“Another unfortunate thing for us is the fact that in reality, we don’t actually own anything. Whatever it is we think is our possession, we are holding it in trust for the coming generation.

“In terms of the campaign and the scheme itself, we can set a target of 500,000 trees within the remaining tenure of this administration. So, we will break it down to what we should achieve on a monthly basis for the next 24 months and we will keep to that.”

The governor later made a symbolic planting of the Cedera Odorata tree, after which other executive members performed the same exercise.

Earlier, the Commissioner for Environment and Natural Resources, Dr. Abdullateef Oyeleke said that the tree-planting campaign is one of the numerous initiatives of this administration towards having a clean and green environment, adding that the environmental economic and social benefit of nature can lead to better vegetation management.

According to him, “we cannot keep on ignoring climate change, which is the most significant material risk to our future. As we increase the effort to rid the state of waste, all hands must be on deck to improve the environment by adoring it with flowers, shrubbs, plants, and trees.

“Your Excellencies, trees provide numerous economic and ecosystem services that produce benefits to communities and welfare of the citizens. The importance of tree planting cannot be overemphasised, which include but are not limited to provisions of shade, enhancement of ecosystem, reduction in the effect of carbon emissions, mitigation of flood and provides employment.”

The event had in attendance the Deputy Governor, Engr. Remi Olaniyan; the Secretary to the State Government, Mrs. Olubamiwo Adeosun; commissioners and other top government functionaries in the state.