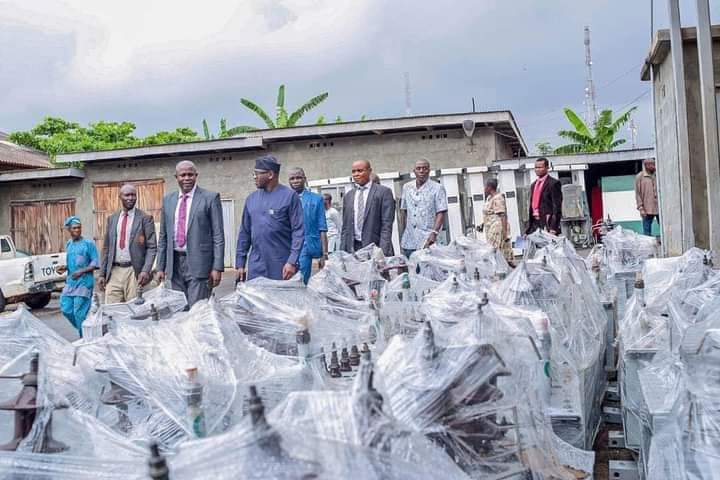 Oyo State government has procured 100 units of 50kva transformers that will power the streetlights project called ‘Light Up Oyo’ across the State.

The project is In line with the determination of the Seyi Makinde government to ensure major towns and cities across the State are illuminated during the night , so as to reduce the activities of criminals that use darkness to attack and rob innocent citizens of their valuables and lives.

The State Commissioner for Energy and Mineral Resources, Barrister Temilolu Ashamu stated this while inspecting the newly procured transformers at the Ministry’s premises in Ibadan on Thursday.

Ashamu said Governor Seyi Makinde was resolute in his decision to implement welfare projects which would touch the lives of the common people positively, especially in giving adequate security to their lives and properties.

The Commissioner added that the project would boost economic activities of the people, as markets and commercial activities tend to be prolonged when there exists proper lighting.

“The transformers will be distributed soon to power the erected street lights to illuminate major towns and cities to curb the criminal activities especially in the urban and rural areas.

“Some of the areas where this streetlights are installed are markets, parks and places that are hotbeds of criminal activities, we also use this project to aid economic activities of the people, as market activities are prolonged when there is illumination.”

He called on people to be vigilant and take care of the transformers in their respective areas after installation, for them to serve the purpose for which they had been procured.

The Commissioner was accompanied during the inspection by the management of the Ministry, which include the Permanent Secretary, Mr Joel Ajagbe and the Directors.