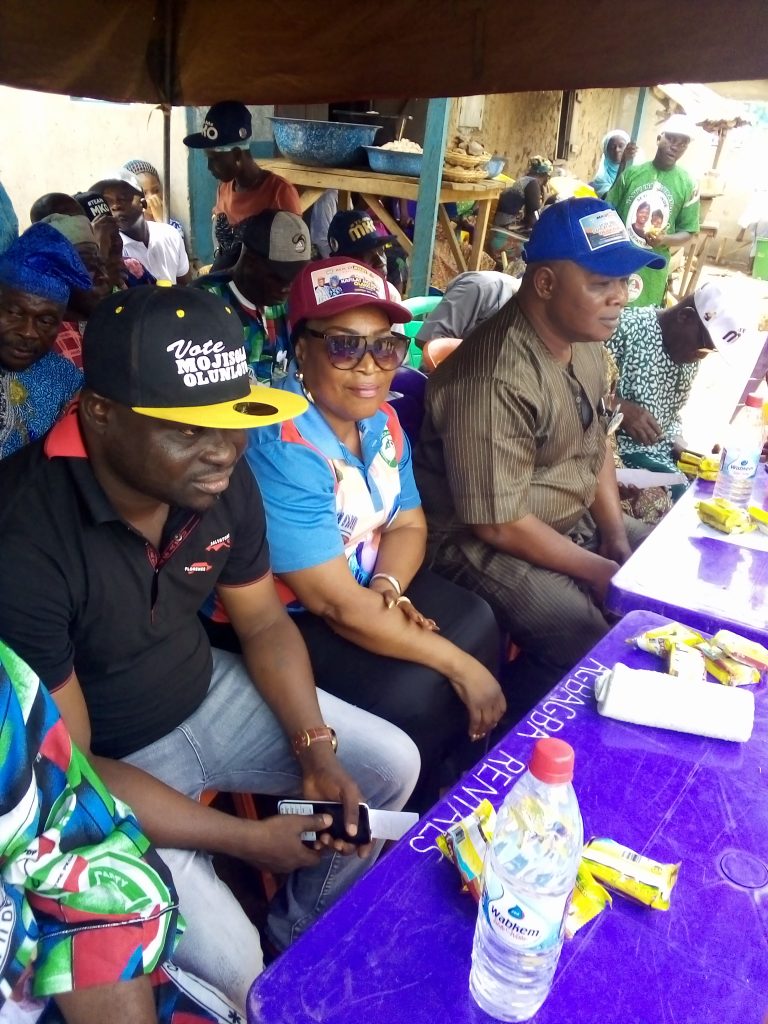 It was a sign of relief and atmosphere of Joy, as the People’s Democratic Party (PDP), Chairmanship candidates for the forthcoming local government election, in Atiba local government, Hon. (Mrs.) Kafilat Mojisola Olakojo and her Vice-chairman, Hon. Oguntona Seun Olunloyo, rounded up their Ward-to-ward campaign and presentation of Party flag to Councillorship candidates in Ward 6, 7, 8, 9 and 10.

It would be recalled that the flag-off event held at Zone 1 and II while the round up campaign hold today at Zone III, Agunpopo Market Junction as well as Zone IV, Abolupe Junction, Oyo, Oyo state.

Speaking at the event, The Director General of the Campaign, Prince Adegoke Azeez, urged the good people of the royal Council to vote Kafilat/Olunloyo and all the Councillorship candidates enmasss. He added that, their administration will follow the footstep of His Excellency, Engr. Seyi Makinde roadmap accelerated development at the grassroot level.

Also, the PDP Party Chairman in Atiba local government, Alh. (Hon.) Muideeen Tijani, assured the people of the royal council that Hon. (Mrs) Kafilat Mojisola Olakojo will make use of her exposure and her experience as a UK trained Community Relation Expert, to bring greater development to Atiba. He further urged the peopy to come out enmass to exercise their franchise and vote for PDP.

In his own remark at the event, the Chairman Community and Social Development Agency (CSDA), Oyo State, Hon. Babatunde Hameed Eesuola affirmed that the combination of Kafilat/Olunloyo will produce positive development in Atiba local government.

Going down the memory lane, he added that Oyo zone remain the only Zone that is yet to secure its own F.M Station, he promised the people of the royal council that, Atiba F.M Station will be soon on Air, courtesy of His Excellency, Engr. Seyi Makinde.

He now urged all the party leaders to organised peace meeting with other leaders in Ward 5 and 9, so as to secure all round victory, come May 22nd, 2021.

He also used the medium to appreciate His Excellency, Engr. Seyi Makinde on the timely reconstruction of Akesan market that’s almost 90% completion, unprecedented reconstruction of Gedu-Oroki-Saabo-Ashipa road by a reputable and indigenous contractor, Street lightening and others.

Equally, the Party Candidate, Hon. Kafilat Mojisola Olakojo appreciated the party stakeholders and teeming members for their unflinching support since the inception of the struggle and also emphasized that she will run an All-inclusive governance, coupled with innovation, as well as many developmental projects to the Local Government.

She urged the good people of the royal council to come out and vote for all Candidates of the party in the forthcoming Local Government election slated for this week Saturday, 22nd of May, 2021.p