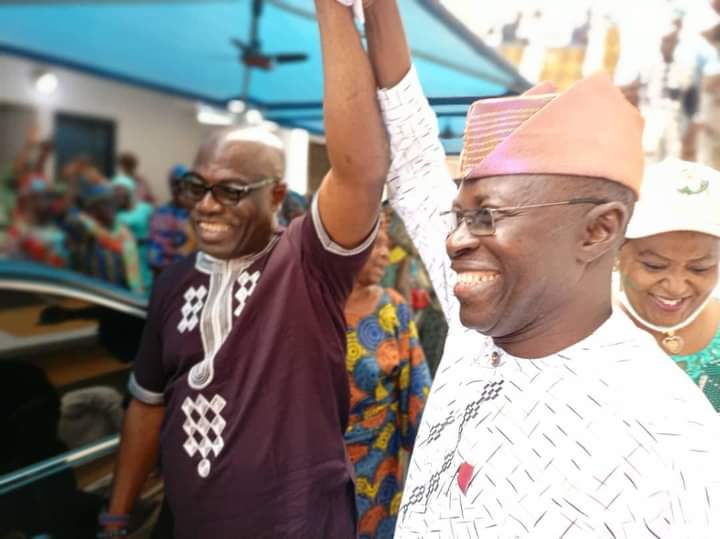 Ambassador Taofeek Oladejo Arapaja in line with his campaign promises of unification Agenda of the party, led members of his team on a reconciliation visit to Alh. Adebisi Olopoeyan.

The PDP National Vice Chairman SW Arapaja in a press release signed by his Special Assistant on media and publicity made available to news men said though it would be wrong if Alhaji Adebisi Olopoeyan didn’t show his displeasure on whatever he felt was wrong, due to the fact that he was part of the success being enjoyed today by all.

He said Alh Adebisi Olopoeyan being a old time friend from the same political home, which is Garrison Commander of South West politics late chief Lamidi Adedibu, it would be very wrong if the two continue to work on different cause, he added that there’s always a rally point between the duo of Arapaja and Olopoeyan.

He further mentioned that if not for the crisis that happened there was never a reason why Olopoeyan should ever support anyone against him.

The opposition that continue to woo you to their side has nothing to offer but their usual use and dump tendencies that they always display, we all shouldn’t allow them to use us against ourselves, we shouldn’t for any reason give room for the lapses that happened in 2011 repeat itself again because at the end we would be at the receiving end, Arapaja added.

Arapaja said it’s pertinent for all hand to be on deck greatness to continue to trend in our party, this party belongs to us all, because we can’t afford to lose the state again, and apart from the state we all need to work together to achieve greatness for the Zone, we need to get back to having more state in the Zone.

In his own speech, Alhaji Adebisi Olopoeyan appreciated the team and promised put all hand on deck and shelf all grievances, if not for anything but for brotherhood of Arapaja.