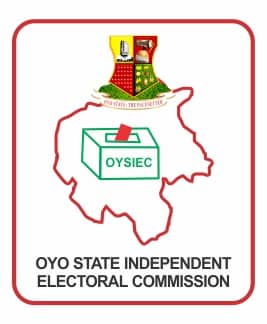 Oyo State Independent Electoral Commission ( OYSIEC ), has expressed its readiness to refund the sum of #50,000 for Councillorship candidates and #250,000 for Chairmanship candidates as stated on Time -Table and guidelines released for local government council elections, coming up in the state .

The Commission , also released the names of screened and qualified Chairmanship and Councillorship Candidates of 17 political parties who have signified their intentions to participate in the election, slated for May 22, 2021.

These were contained in a statement issued and signed by the Electoral Commissioner in charge of Voter Education , Prince Afeez Adeniyi, on behalf of the commission and made available to journalists in Ibadan .

Similarly,the statement stated that the commission has resolved to refund the money of those candidates that have paid before this pronouncement.

“The Commission wishes to seize this opportunity to further inform the general public and specially political parties that our attention had just been drawn to the order of Oyo State High Court in Suit No.I/177/2004: NATIONAL CONSCIENCE PARTY V. OYO STATE INDEPENDENT ELECTORAL COMMISSION AND ANOR. delivered on 18th March 2004 to the effect that sections 10 (b) (e) and (f) of the State Independent Electoral Commission Law of Oyo State contravene sections 7 (4), 106 and 107 of the Constitution of Federal Republic of Nigeria 1999(as amended)” .

” In the circumstance, the commission hereby cancels payment of nomination fees of #50,000 for Councillorship candidates and #250,000 for Chairmanship candidates (as stated on Time Table and Guidelines for the Election) since the Constitution of Federal Republic takes precedence over any law or bylaws.”

“We have therefore resolved to refund those candidates that have paid before this pronouncement.”

“All the political parties are also to note that the names of their party agents in the polling units, ward collation centres and Local Government Collation Centres must be submitted to various OYSIEC offices in 33 local government councils of Oyo State on or before the close of work on Tuesday, 18th May, 2021.”

The good people of Oyo state are also reminded that elections to elect Councillors and Chairmen in the 33 constitutionally recognised local government in the state will hold on 22nd May, 2021 from 8am to 3pm. There shall be restrictions on human and vehicular movement through the time of election.

The commission still remains resolute in its determination to conduct a free, fair, credible and transparent Local Government Election in Oyo state. This can only be achieved with maximum cooperation of all stakeholders in Oyo State.

The Commission, however enjoined all eligible voters to turn out en masse in the date of election and assuring them that their votes will count,adding that May 22, 2021 announced by the commission as election date remains intact.