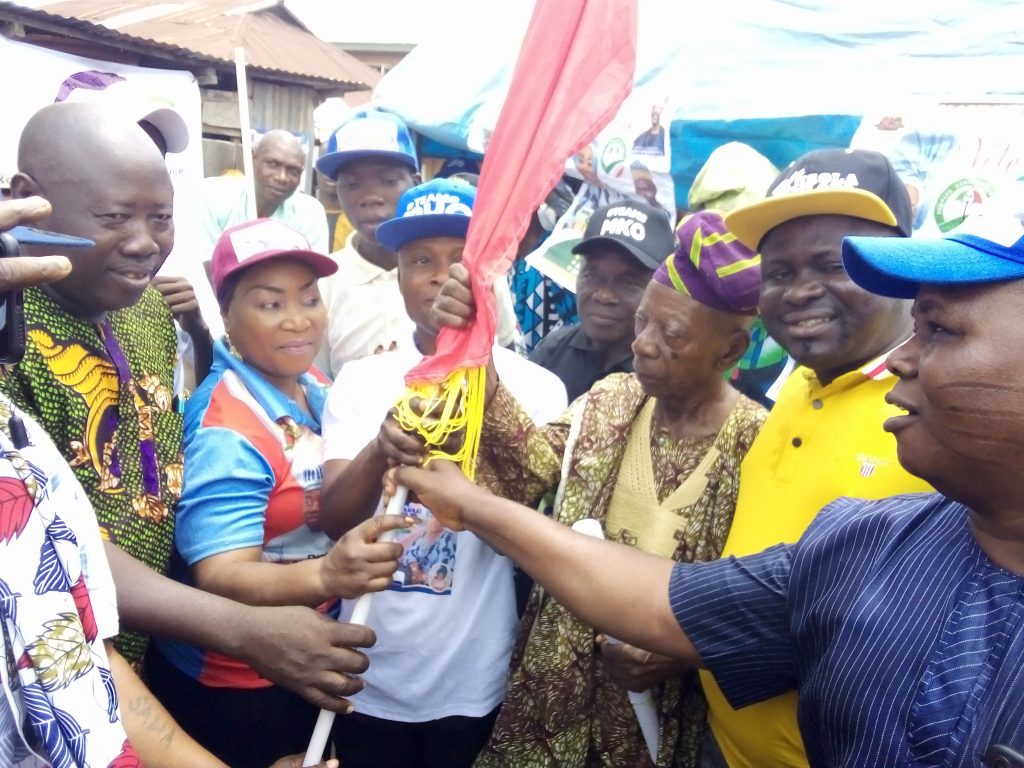 The People’s Democratic Party (PDP) Candidates for the forthcoming local government election, in Atiba local government, Hon. (Mrs.) Kafilat Mojisola Olakojo and her Vice-chairman, Hon. Oguntona Seun Olunloyo, has officially flagged off her Ward to ward Campaign and presentation of Party flag to the Wards Councillors.

The event which was witnessed by the party stakeholders and elders of the Royal council joined the party’s candidates to presents party flags in ward 1, 2, 3 and 4 ahead of local government election slated for 22nd May, 2021.

Speaking at the event, The Director General of the Campaign, Prince Adegoke Azeez, explained that the closest government to the people is the government at the local level, he further expressed his pleasure over the achievements of His Excellency, Engr. Seyi Makinde in Oyo State, specifically, Oyo Federal Constituency.

He now appealed to the good people of Atiba to join hands with His Excellency, by voting Kafilat Olakojo/Seun Olonloyo as the Executive Chairman of Atiba Local Government, as well as all the Councillors, for effective representation at the grassroots.

Also, the PDP Party Chairman in Atiba local government, Alh. (Hon.) Muideeen Tijani advised the people to come out enmass to exercise their franchise and vote for PDP.

He added that, it has never happen in the history of Oyo Federal Constituency to have a female as the Chairman but this time, the royal council is ready to break the record in his own tenure as a party chairman.

Equally, the Party Candidate, Hon. Kafilat Mojisola Olakojo appreciated the party stakeholders and teeming members for their unflinching support since the inception of this struggle and also emphasized that when the Team of Chairman, Vice Chairman and Councillors assume office, she will run an All-inclusive governance, with innovation and many developmental projects to the Local Government.

She urged the good people of the royal council to come out and vote for all Candidates of the party in the forthcoming Local Government election slated for Saturday, 22nd of May, 2021.

The campaign was attended by; some of the Alhaji Tunde Agboola, Alhaji Gaskiya, Alhaja Adebisi Fatima, Alh. Titi Obadokun, Baba Olubuse and several others.