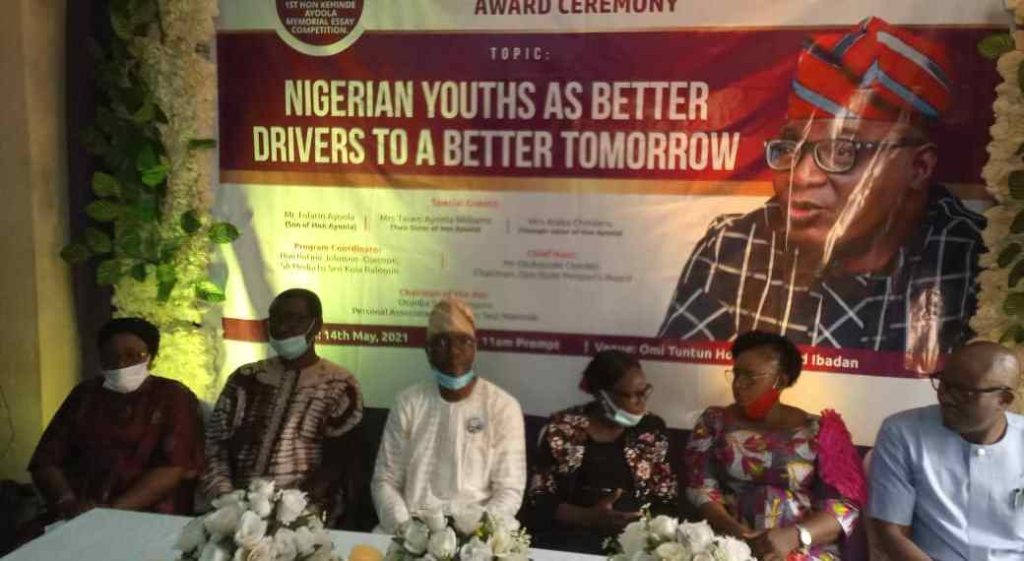 In memory of Late Rt Hon Hon Kehinde Ayoola, Friends and family organized an essay competition to put to light his love for writing as he was known to be a great writer.

The essay competition was facilitated by Darling International Services.

Ayoola was a Commissioner for Environment and Natural Resources and had at the start of the Fourth Republic, served as the Speaker of the 4th Session of the Oyo State House of Assembly, under the administration of Late Governor Lam Adesina.

The event which was held at Omitutun House in Ibadan, on Friday, was said to be the first of many to come essay competition in memory of Late Ayoola.

The essay which was opened to all was tagged “NIGERIAN YOUTHS AS BETTER DRIVERS TO A BETTER TOMORROW” has 48 entries and only 5 were adjudged as outstanding.

Outstanding performance, Adeniyi, Adepojo and Abdulrahman Adebayo were applauded for their brilliancies and Certificates of Excellence were given.

In his opening address, the Program coordinator and Specia Assistant on Media to Senator Kola Balogun, Hon Rotimi Johnson-Ojasope was full of praise for Late Ayoola adding that he was a man who believed in hard work.

“We were close and I must say he didn’t give room for laziness. He was a good writer and he appreciated if you can articulate yourself in writing and this program is something he had in mind long before his death and we are here in to kick start in his name.” he said.

Mrs Taiwo Ayoola, the twin sister of late Hon Kehinde Ayoola while presenting cash price to top 3 of the essay competition said it was a great joy to have commence the competition as it was a thing of joy to the dead and thanked all friends and families who have been supportive since the death of her twin brother.

“I know he has the leadership spirit right from the time we were in primary school as he always stand tall to talk to his friends, his writing skill was superb and this is the reason we are doing this on his behalf .” she said.

Mr Olukayode Oyedeji Chairman Oyo State Pension’s Board was the Chief Host and Otunba Seye Famojuro was the Chairman of the day.

Mr Folarin Ayoola was not present because of academic schedule but 7 nephews of the Late Ayoola were in attendance.