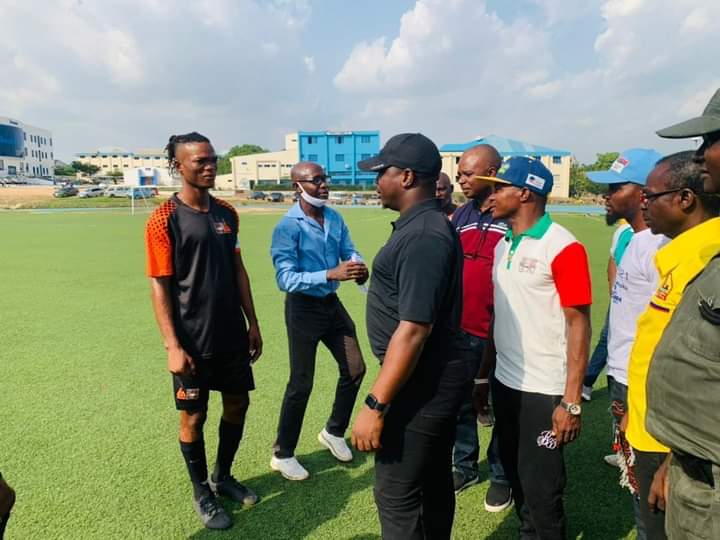 In a bid to contribute to the development of sports in Oyo state, the management of Agidigbo fm in collaboration with the Oyo state government, has kicked off the maiden edition of a football competition tagged “Agidigbo fm/Oyo State Governor’s Cup.”

This came after years of neglecting the Oyo state Governor’s cup, which has just been revived following an opening ceremony and kick off match held on Wednesday, 5th of May 2021.

The management and staff of the host, Agidigbo fm, Oyo state government officials, sports journalists among many other dignitaries across the state, were on ground at the football pitch of Lead City University, Ibadan, to embrace the new development.

Speaking to journalists at the event, Mr. Asiwaju Seun Fakorede, Oyo state Commissioner for Youth and Sports, expressed feelings of gratitude over the new development.

According to him, “This is a welcome development, and like you all know, sports in Oyo state has taken a different dimension entirely. It’s not even in anyway compared to the way it has always been because what we are enjoying now has never been experienced before. So just like we have the kickoff for the Governor’s cup now, this is just the first of many.”

He further made known that the partnership between the government and the private sector on sports is not particular to one brand alone, noting that the franchise is not to a particular brand alone as any other private body can also show interest in hosting a sports competition in the governor’s name.

“I’m here today to commend Agidigbo fm and to also encourage other brands who have something related to bring it up,” he posited.

Addressing the issue of continuity and sustainability which has been a major challenge for political office holders across the country, the Commissioner said, “The question of continuity is a function of structure and system that’s put in place. So what we’re doing today, we’re trying to make sure that we institute a lot of systems that will make things work.

“Look at today now, this competition is being organised by a private body and for something like this, we think it’s something that should continue. It’s a joint venture between the government and the private sector.

“I know that when there’s a reasonable attention from the government, wether we like it or not, this will continue to move well.

“The reason why there’s no sustainability or continuity in a number of cases is because of the fact that the disposition of the government is not so evident in this thing. But the government of today will definitely do a lot to make sure that these programs are sustained.”

The Commissioner thereby pleaded with the youths of the state, encouraging them to embrace sports instead of social vices. He also promised that the government would continue to support the interests of the youths.

He said, “To the good people of Oyo state, particularly the youths, the constituency that I represent, I seek your indulgence to try to be calm and do what is expected of a good citizen or indigene of any community or state.

“I want to encourage us, instead of embracing social vices, let us embrace development because it’s through development that we can grow the way we ought to grow. That is why you have somebody like me as your commissioner because I’m always very much interested in anything that has to do with us (youths). So please, let us continually to be good citizens, we’ll continually do whatever will represent our constituency well.”