Worker’s Days: Oyo State Governor as a Cynosure to the World ||By Bashorun Saintabey 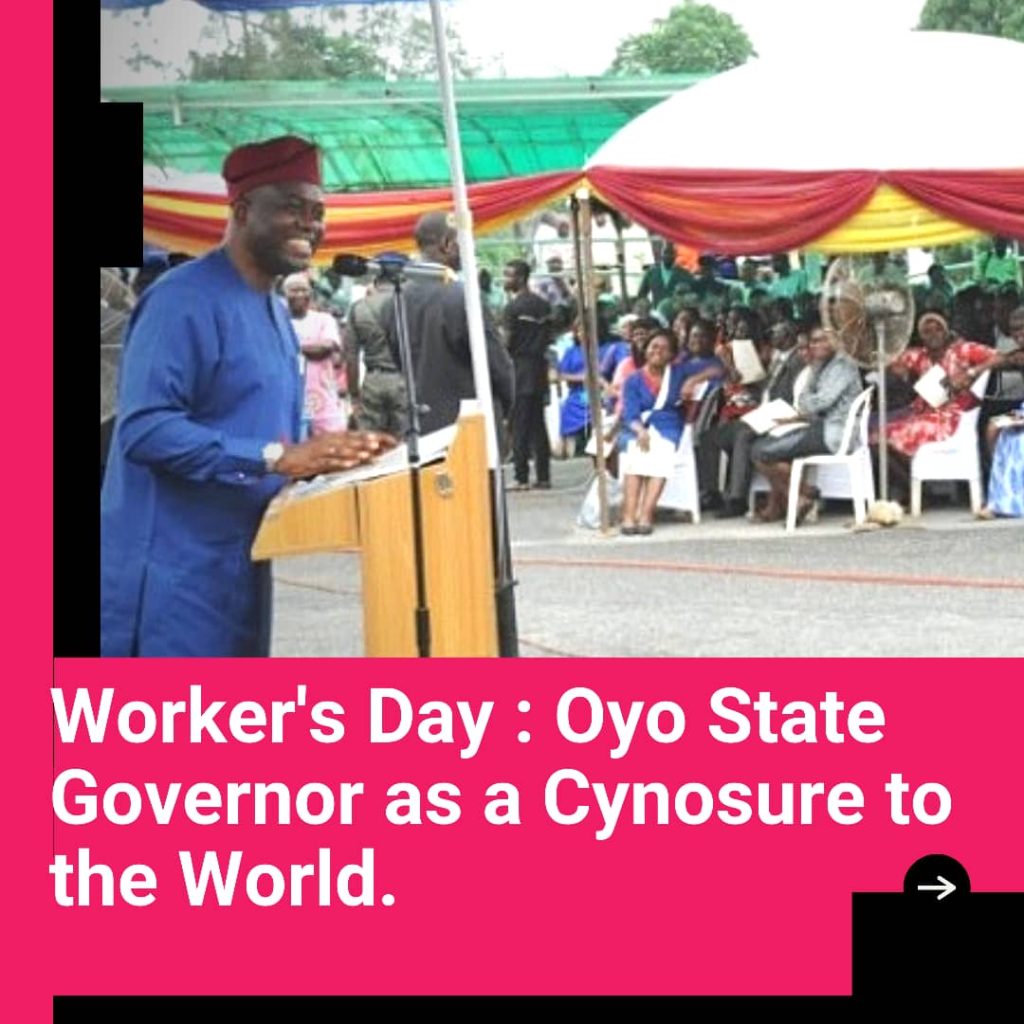 Innovation distinguishes between a leader and a follower. When you do what is right, not what is easy. People will see that leadership in you as the capacity to translate vision into reality.

In reality in Oyo State, there is “Ise rere” Good service delivery from the state government, a good leader must hate the wrong thing more than they hate the pain of doing the right thing.

Opinionated the fiction on “Iwa rere”, Jane Austen in the book titled Emma Woodhouse opines that respect for right conduct is felt by everybody, a ground-breaking projects will witness in Oyo State is orobanche and mistotoely on Iwa rere.

Governor Seyi Makinde as trailblazer is setting the standard day by day, leadership is not about titles, positions, or flow charts. It is about one life influencing another. During the scourge of pandemic, Oyo state is one of the states who contained the spread of the virus while the governor also ensured the prompt payment of the state workers as he surprised the world when he paid the April salary on 25th of every month which make the state workers to be the first state to receive salary in Nigeria.

The mark of a great man is one who knows when to set aside the important things in order to accomplish the vital ones. Governor Seyi Makinde set the priority of workers high and till today all workers are enjoying the tremendous supply of their needs and this has improved the flow of work in the state.

Great spirits have always found violent opposition from mediocrities. The latter cannot understand it when a man does not thoughtlessly submit to hereditary prejudices but honestly and courageously uses his intelligence. This thoughts also centre on “Inu rere”. Prof Niyi Osundare a leading African poet, dramatist, linguist, and literary critic in his poem titled “Clear Mind” dictate the tune of Inu rere;
When your heart is clean
And your mind is good
You will walk through fire
But you will not be burnt
You will run the race
You will not be tired
You will see a star
On the darkest nights
Your yam will be white and crisp
Your bread soft and warm
Your song will be the kind
The world will like to sing

The administration of governor Seyi Makinde has shun politics in governnace as he handles the activities of the government and he sees everybody in the state as equal. He shunned the idea of this belong to opposition or not, his main focus is to actualize the real dream of Oyo State as a pace setting state.

Engr. Seyi Makinde is like a shepherd. He stays behind the flock, letting the most nimble go out ahead, whereupon the others follow, not realizing that all along they are being directed from behind. He set the standard for his appointees and they are all aligned, no wonder we are witnessing effective governance in the state.

One of the effectives touch of the state government on workers affairs was the decision of the State Governor, Engr. Seyi Makinde to offset the arrears of promotion which is in conformity with the administration’s welfarism policy and the realization that the workers have labored for the said period without being elevated as stated in the civil service code. This was so evident that for the last four years past administration failed to act on it and workers were so delighted to see worker friendly governor doing so.

Right thinking being always think of upgrading, elevation and joy of his people, Governor Seyi Makinde Administration also approved the appointment of Tutor-General in the State teaching service under the Teaching Service Commission (TESCOM) and the State Universal Basic Education Board (SUBEB), which will have equivalent position with a Permanent Secretary in the State Civil Service, while workers in the State service now have the chance to be elevated to level seventeen before retirement.

Retirement security is often compared to a three-legged stool, Governor Seyi Makinde has changed the story of the state pensioners, not only his salary that is being paid to State Pension account, his administration has also paid billions of Naira to the State Pensioners, the Secretary, Nigeria Union of Pensioners (NUP), Oyo State, Mr Segun Abatan, said no administration in the state since 1999 paid as much in pensions and gratuities as the Governor Seyi Makinde led administration has paid in the past 23 months.

Oyo state pay over #500 million as gratuities every month and the state have paid out #11.7billion, findings shows that Initially the state pay a sum of #100million towards payment of pension monthly, it was increased to #180million in June 2019 and as at January 2021, it has been increased to #235million monthly and the Governor is also planning to do better

In light of the welfare packages, he has disbursed to pensioners in Oyo state, Governor Seyi Makinde was honoured recently as a Pensioners’ Friendly Governor and conferred with an Award of Excellence in Governance in Abuja. Efficiency is doing the thing right while effectiveness is doing the right thing. Oyo state governor is efficient and effective.

Leadership distilled down to 3 words: Make a difference. The governor of Oyo State is Making A Difference.