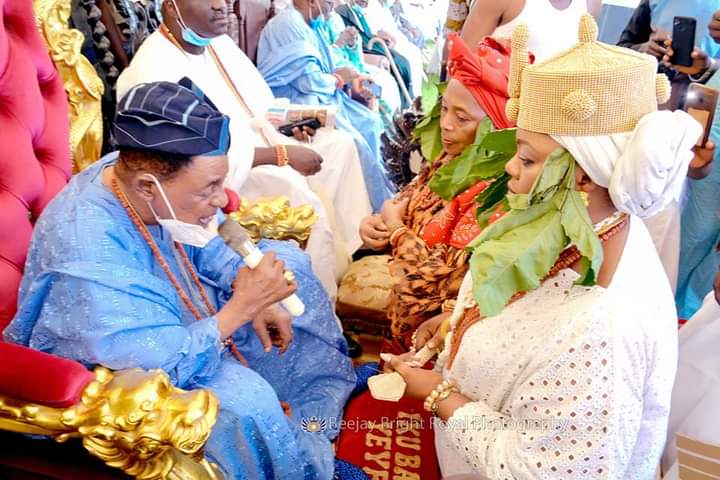 The epoch making occasion of installation and coronation exercise took place at the palace of the Alaafin on Monday, April 26 with the full attendance of all members of the Oyo State Traditional Council, new Iyaloja’s admirers, Oyo State Market Leaders Joint Working Committee and host of others.

The eight (8) clusters of Oyo State Market Leaders Joint Working Committee,where the Presidents and Secretaries endorsed the candidature of Princess Azeezat include the followings:
while Alhaja(Chief) Hamdalat Iyaduni Lawal and Mr Oluwaseun Olaniyan endorsed princess’ candidature on behalf of the association as the President and Secretary.

Tradesmen and Artisans Association of Oyo State approved her candidature with signatures of Alhaji(Chief) Yisau Kolayode Hamzat and Alhaji Sabitu Akanji Salawu as the president and Secretary.

Chief(Mrs) Patience Labake Lawal and Alfa Waheed Salaudeen signed on behalf of Joint Traders Association of Oyo State as the president and Secretary.

Oyo State Association of Traders in Nigeria, also in support of her candidature with approval from Mrs Stella Modupeoluwa Olabisi and Comrade Taofeek Oyewale Alausa as the president and secretary.

While Companion Traders Association of Oyo State is not left behind as her candidature was endorsed by Chief Samson Adeola Afolabi and Alhaja Isiaka Lawal as the president and secretary respectively.

Alaafin, while performing the coronation exercise, congratulated the new Iyaloja General on the confidence, belief and sincerity that the market leaders have in her, to have suggested and confirmed her for the exalted position after several consultations and deliberations.

Oba Lamidi Adeyemi tasked her to maintain her status quo on reasons and factors which necessitated her nomination and installation as the new Iyaloja General for Oyo State, stressing that her pure and genuine disposition to the market leaders’ association will henceforth culminate fruitful and prosperous results.

The monarch in affirmation and authenticity of the coronation exercise carried out on Princess Azeezat Folashade Abeo Nurudeen, penned Governor Seyi Makinde while he informed His Excellency that he(Alaafin) performed the coronation on her based on the unanimous decisions of the market leaders.

In her appreciation, the new Iyaloja General for the state, thanked the Imperial Majesty, The Alaafin of Oyo for making time out of his tight schedules to make the installation and coronation feasible, promising that she would do the needful to contribute his quota to the growth and development of the various cluster groups that make the association and equally sought for the cooperation of all and sundry in order to attain the greatest results.

The coronation was well attended by the creme la creme within the state and beyond amidst funfair and merriment.