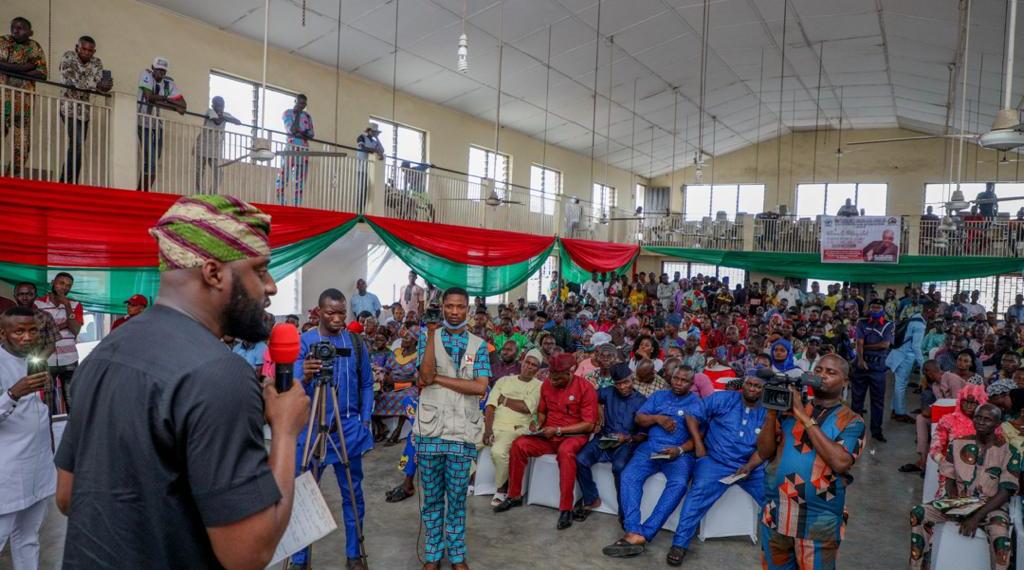 The Speaker, Oyo State House of Assembly has assured the people of his constituency in Ibarapa East constituency that all avenues will be exhausted to stem the tide of insecurity in Ibarapaland.

Hon. Ogundoyin said part of the avenues is the inauguration of Ibarapa Joint Security Task Force, which he said he will propose to Governor Seyi Makinde.

The Speaker, while interacting with youths at a Summit organized to give account of his stewardship, maintained that the proposed joint security task force will allow all stakeholders to work together to protect lives and property of the people.

He also promised to discuss with appropriate authority to ensure total rehabilitation of Eruwa-Igbo It’s road which has become a danger zone for kidnappers to perpetrate their evil act.

Hon. Ogundoyin further highlighted operation light up Oyo State as part of security measures embarked on by the state government. He said every nook and cranny of the state including Eruwa and Lanlate will be illuminated to guarantee safety.

“This Summit is not organized for political reason, rather, it is to interact with one another, to chart way forward on challenges facing us as a people. It is an avenue for us to intimate and develop strategies and policies to improve the standard of living if our people. It also a way for every elected office holder to return back home and tell the people that gives him mandate the situation report.

“It is my believe that security is fundamental, it is a pillar in which success of every other sector rest on. That is why we make it open to everyone to have an input irrespective of political party affiliation.

“We have listened to all suggestions, advices, and recommendation of different groups. I want to assure you all your advice and recommendations will form part of our policies. The present administration under the leadership of Engr. Seyi Makinde will continue to give necessary support to our security agencies to ensure they give their best to protect lives and property of the people,” the Speaker said.

He said that he will not relent on his oars in championing the cause of women and people living with disability.

On education, the Speaker expressed that it is part of his educational plan to ensure that all courses in Lanlate College of Education are fully accredited before the expiration of his tenure.

While urging the youth to continue to give necessary support to the Government of Engr. Seyi Makinde, Ogundoyin assured that all suggestions and recommendations, as well as criticism will be looking into to develop policies that will make life worth living for people in Ibarapa East state constituency and Oyo States in general.

The representatives of Commissioner of Police and Assistant Area Commander, Eruwa, CSP Maku Aderemi, enjoined the youth to always cooperate with security agency by giving them timely information so that they will be able to address the situation on before if goes out of hand.

“Security issue concerns everybody, it is not what you can leave for security agents alone. I want to appeal to our youths to be vigilant and security conscious of situation in their environment.”

Imploring the youth who are interested in agric to take advantage of good agriculture initiative of Governor Seyi Makinde, Chairman, Oyo State Agricultural Development Agency, Hon. Adeniyi Ajayi said there are lots of programmes on ground to encourage young farmers.

He explained that N7.6 billion loan approved by the state’s assembly is to make infrastructure available in the farm estate proposed by the government. Ajayi added that contract has been awarded and work will soon commence at the farm settlement located in Akufo and Eruwa.