Odumakin Remains A Star Even In Death – Makinde 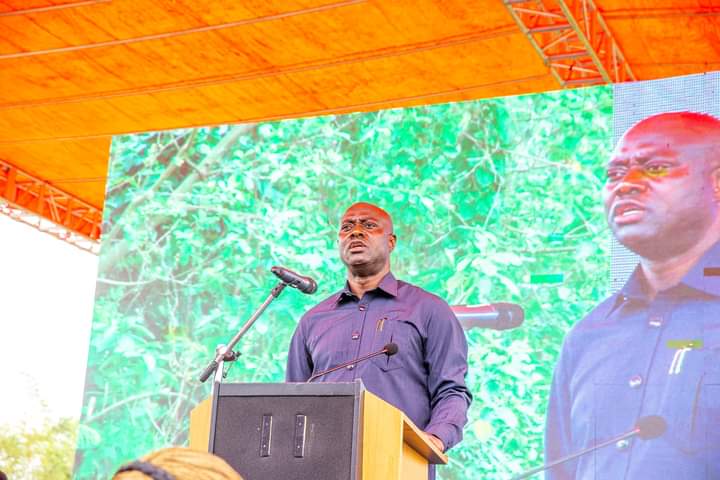 Governor Makinde stated this while paying tribute to the late Afenifere chieftain during a funeral service held at the Origbo Anglican Grammar School, Moro, Osun State.

A statement by the Chief Press Secretary to the governor, Mr. Taiwo Adisa, quoted Makinde as saying that Odumakin’s works will continue to be a shining star to light the path of generations coming, adding that the late activist always spoke truth to power.

The governor, who attended the funeral service alongside his Osun and Ekiti States counterparts, Gboyega Oyetola and Dr. Kayode Fayemi, declared that Odumakin left indelible footprints in the sands of time.

He added that those he left behind in Afenifere will carry the battle for a just society to a logical conclusion.

Makinde said: “Well, what can I say? Yinka and I are about the same age; it is only a year that separated us. It is not how long but how well.

“We are all here today; I and the good people of Oyo State, who I am representing, to give honour to whom honour is due even in death.

“I came late into Afenifere because I was not really interested in politics. I became an accidental politician and joined Afenifere, which led me into some interactions with my brother, Yinka Odumakin.

“Just like others have attested, he spoke truth to power.

“When I look at all the dignitaries that are here today, one thing I want everyone to take home is the fact that a life lived with integrity, commitment to one’s ideal, even though that life may not have the trappings of fortune or fame, will be a shining star to light the path of others that are coming behind us. And that is what Yinka did for this generation.

“The ideals and struggles he lived for, his fortunes will forever be a shining star to light the path for us until we get the type of country that we deserve and the one himself and other comrades laboured for.”

Governor Makinde added that the comrades and freedom-fighters whom the deceased left behind will continue from where he stopped, to actualise the dream of a better Nigeria.
“Yinka has stopped his work but the rest of us will continue until we get the country we deserve,” he said.

He concluded: “Yinka, my brother, my friend, sleep on. And to the family, I pray that God will give you the strength to carry on.”

In their separate remarks, Ekiti and Osun States Governors, Fayemi and Oyetola, eulogised the late publicity secretary of the Afenifere, whom they described as a patriot.

Fayemi said that Odumakin spoke for the voiceless in spite of intimidation.

Governor Oyetola also praised Odumakin for his relentless struggle for the downtrodden, declaring that his name will never be forgotten.

Leader of Afenifere, Pa Ayo Adebanjo, who stated that he defied Yoruba culture to enable him to “give honour to whom it is due,” said that Odumakin was a rare gem in this generation.

He explained that the late Odumakin consistently fought against injustice and political imbalance.

He added that Odumakin was an uncompromising Awoist, a progressive to the core, who has achieved a feat that will never be forgotten.

Adebanjo urged all other Afenifere members to emulate the good virtues of Yinka Odumakin, saying: “Yinka fought against imperialism, Fulanisation and colonisation by calling for the restructuring of  the country,” but that he never advocated secession.

Earlier in his short sermon at the event, the president of the Pentecostal Fellowship of Nigeria, Bishop Francis Wale Oke, enjoined everyone to always remember that death is a reality.

He said that Comrade Odumakin devoted his life time to worship God and serve humanity, adding that the late activist, till death, remained a courageous, dogged and fearless fighter.

He equally praised Pa Adebanjo for showing the fear of God, praying to God to grant the soul of the departed eternal rest and also urged his wife, Dr. Joe Okei-Odumakin, to remain strong for the children.