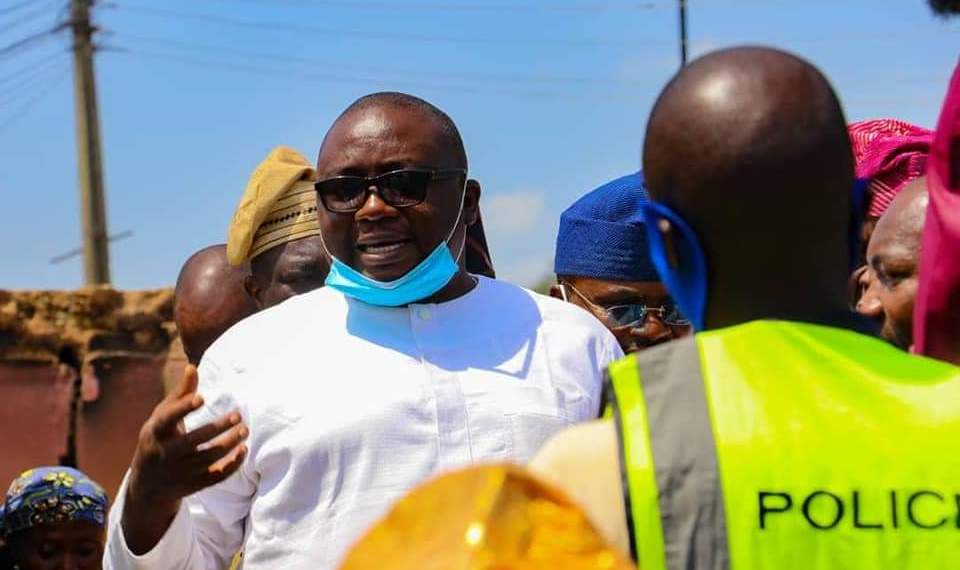 Six months after the Ojoo and Gbagi Police Stations were burnt down during the EndSARS protest, the former Deputy Governor of the Central Bank of Nigeria, Chief Adebayo Adelabu has pledged and committed to reconstruct the two police stations.

Chief Adelabu stated this during a courtesy visit to the Oyo state Commissioner of Police, CP Ngozi Onadeko.

In addition, he offered an immediate donation in the sum of Two million naira to relieve the financial burden of the widows of the slain police officers affected by the EndSARS protest.

According to Comrade Femi Awogboro, one of the Media Aides to Chief Bayo Adelabu who made this known to Journalists, he stressed that his Principal will reconstruct the two police stations and he’s prepared to commence work immediately, given the importance of these two stations to the security of lives and properties in the affected areas.

Chief Adelabu who is the former Chairman of the Oyo State Security Trust Fund pledged his unflinching support to Oyo state police command, as an indigene, resident and stakeholder to strengthen the security architecture of the state.

“The security of Oyo state deserves urgent and prompt attention by relevant stakeholders for the protection of lives and properties of indigenes and residents as well as the social and economic development of the state. It’s quite shameful that almost seven months after the EndSARS protest, the goverment is yet to reconstruct any of the burnt stations. This is what prompted us to decide to rebuild these stations immediately especially those in volatile locations like Ojoo and Bola Ige International Market, Old Gbagi, on New Ife road”, he said.

Chief Adelabu explained that everyone has a crucial role to play to strengthen the security architecture of the Pacesetter state which used to be one of the safest states in Nigeria, hence the need to support the Nigeria Police at this crucial time.

“On the welfare of the widows of the EndSARS victims, we believe that it is also taking too long for the government to respond to the yearnings of these poor women whose husbands died during the protest, by relieving them of the heavy financial burdens left behind for them. It is not that we didn’t know what to do immediately but we have waited for over six months for government to come to their aids. Since nothing is forthcoming from the government yet, this is our own little way of relieving them of the financial responsibilities as this goes a long way in motivating serving officers of the Nigerian Police. As a stakeholder in this state, we have decided to donate a sum of N2million to the widows to enable them take care of their immediate financial needs while waiting for government compensation”, Chief Adelabu added.

He also said that issues of security are quite sensitive and authorities need to be proactive in handling them. He advised that the government should go back to the template left behind by the immediate past administration with regards to the Security Trust Fund where he was the immediate past chairman. The Trust fund, while he was there catered for the regular maintenance, repair and refurbishment of Police equipment and infrastructure while also incentivising the officers with regard to their welfare. It’s quite expensive to do this but it was a collaboration between the government and the private sector. Private manufacturing companies, banks including the Central Bank of Nigeria contributed substantial amounts yearly to finance the activities of the Trust Fund.

In responding, the Oyo State Commisioner of Police, Mrs Ngozi Onadeko thanked Chief Adelabu for the visit and commended him for his good gesture to the Nigerian Police. She also said that other notable Oyo state indigenes and residents should take a cue from this by extending their hands of fellowship and support to the police as security of lives and properties is everybody’s responsibilities. She expressed her gratitude over the donations to the widows of the EndSARS Police victims and assured that she would arrange for these widows to recieve the cash donations by themselves directly from Chief Bayo Adelabu for transparency. On his offer to rebuild the burnt stations, the CP accepted Chief Adelabu’s offer with a lot of gratitude and confirmed that he would be called upon to start work in conjunction with the works department of the Oyo state command of the Nigerian Police as soon as the paper works are completed. He asked Chief Adelabu to make a formal offer in writing to the Nigerian Police and approval will be duly processed.

The formal offer to rebuild the staions was sent to the Police headquarters immediately after the meeting and brief inspections were made to the site while expecting an approval feedback from the command.