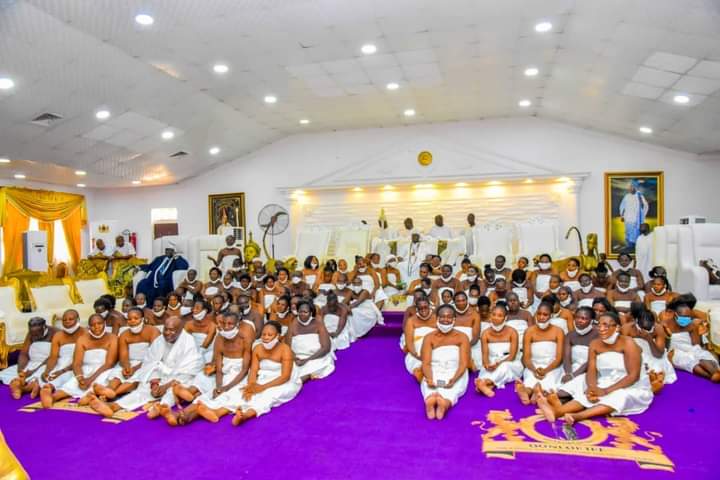 The Arole Oduduwa & Ooni of Ife, Ooni Adeyeye Enitan Ogunwusi Ojaja II, has assured all descendants of Oduduwa across the world that there will never be war in Yoruba land or any part of Nigeria in the face of challenges confronting the country.

According to a statement by his Director of Media and Public Affairs, Comrade Moses Olafare, the Ooni Ogunwusi gave the assurance on Sunday while playing host to a cross section of women under the aegis of Obinrin Oodua, at his Ile Oodua Palace, Ile-Ife.

Ooni Ogunwusi who is the Co-chairman of the National Council of Traditional Rulers of Nigeria, explained that the current security and economic challenges rocking the country will soon be a thing of the past.

“If you study history, you will agree with me that there has never been a time when Yoruba land got disintegrated and I can assure you that such will never happen. We are not going to war, we have always been a rallying point and we won’t lose that status.” The Ooni said.

Earlier in their expression, the women under the leadership of Yeye Simisade Keeku-Onayeni explained that a recent revelation from Ifa oracle indicated that their could be a war in Yoruba land if the recent spike in insecurity across the region is not well managed.

“We were implored to pray fervently in the ways of our ancestors and visit six prominent palaces across the region for royal blessings. We chose to start here in Ife because this is our source from where it all began.” Yeye Simisade said.

The Ooni who prayed for the women with several items including honey, salt, water, cola nuts, bitter cola and gin among others, applauded them for standing up firm for the Yoruba race as the real mothers that they are.

Also on Tuesday, market leaders under the aegis of the Association of Traders and Market Leaders of Nigeria paid a courtesy visit to the Ooni, during which they introduce the new leadership of the association led by Barrister Chinwe Monu-Olanrewaju, the Iyaloja of Nigeria.

In her presentation, the Iyaloja thanked the Ooni for hours immeasurable supports for the growth of economic activities in the Southwest, adding that a strong commitment to improve the security situation in the region would enhance productivity.